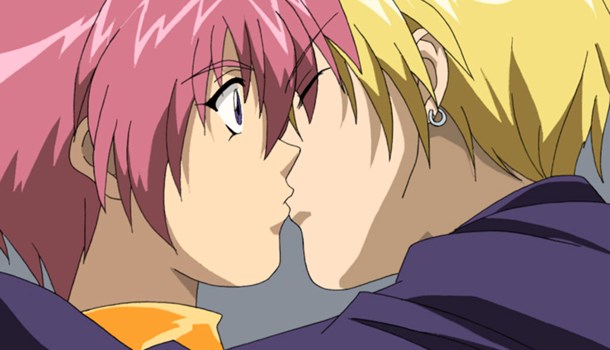 Gravitation (Lyrics of Love) is a sixty minute film that was originally created in 1999, a year before Gravitation the series, but is set after the series. This explains some small discrepancies, such as Shuichi having red hair in the film, but pink hair in the series, and why the animation style feels a little aged compared to modern anime. Lyrics of Love was directed by Shinichi Watanabe who would later go on to direct Excel Saga, if you keep an eye out you can spot him within the anime.

Lyrics of Love follows Shuichi Shindo, the famous lead vocalist of the band Bad Luck. Shuichi writes the lyrics for their songs, but has recently become depressed because his lover Eiri Yuki, a writer, keeps ignoring him. Yuki has been known to be cold towards Shuichi before but this time his actions seem more deliberate. It seems that his latest writing job is the reason behind it all. Sadly that is the whole story to the OVA, a little disappointing as I was expecting more. The film feels more like a long episode because nothing really happens that would be at all out of place in the series.

The anime is jam-packed with melodrama and although that’s fine within a love story, there isn’t much romance for most of the anime, making the drama seem overdone or humorous most of the time. Most of the air-time is taken up with Shuichi singing either in the studio or on stage, which I’m sure fans love and being an anime about a band it makes sense to have some performances. But overall it made the anime feel like a marketing ploy, with the producers trying to reel in more sales for the soundtrack. One of the most disappointing things about the OVA is that the other characters, such as the band members, are ignored for most of the anime.

The anime style feels a little dated now compared to newer anime, but it fits the genre and that’s what matters. The characters all look like your typical bishonen boys, and Shuichi looks like such an uke character that he could easily be mistaken for a girl by those unfamiliar with the series or genre. However at times the animation falls flat, with moments where trays slide into the floor instead of through doorways, or a building that grows and shrinks as day and night pass. All animes have small discrepancies in the animation but these two examples seemed so obvious that I’m surprised no one noticed at the time.

Overall Gravitation (Lyrics of Love) achieves exactly what it set out to do, and if you’re already a fan of the series then you’ll probably enjoy the film a great deal, although it feels like more like a long episode rather than a film. However if you’re not already a fan then I’d advise to give it a miss and check out the series first and other great yaoi or shōnen-ai anime and manga.

The DVD extras are a nice touch, with the standard textless opening , an alternative textless ending credits for episode one, and an interesting extra called “Manga vs Anime” which show the differences between the two versions of Gravitation, to name a few.

5
Ok for fans, but others can probably sleep easy without it.
LATEST REVIEWS