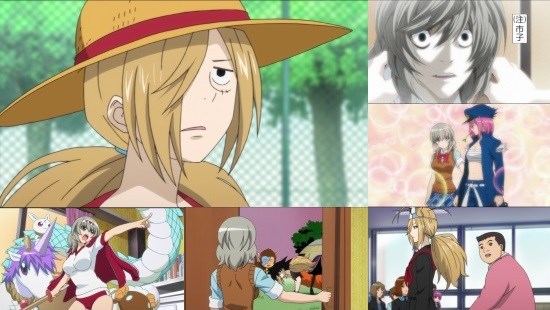 Ichiko Sakura has it all; looks, brains, wealth and a lot of good fortune. However, her incredibly fortunate life brings her to the attention of the poverty gods, who realise that her large amounts of luck and happiness brings misfortune and unhappiness to those around her. Poverty God Momiji is given the task of taking Sakura's excess good fortune and restoring the balance of fortune in the world, although Ichiko is not willing to give up her fortune without a fight. Thus begins a battle between the lucky Ichiko and the unfortunate Poverty God Momiji.

Good Luck Girl immediately sets itself up as a gag comedy series that mixes a character-driven story with referential sketch humour and slapstick. Within the show there is a clear cut narrative structure, with each episode building on the story from previous ones in order to show the development of Ichiko's character from the stuck-up loner she appears to be at the beginning of the series to a more well-adjusted individual who considers others feelings. While the story itself is always handled in a rather comedic fashion, it has its moments of drama that actually blend in rather well with the overall tone of the show.

That tone is one which takes its story and characters seriously but puts them into comical situations with the chance to reference other anime and manga. Most of the references come from the Poverty God Momiji, who quickly jumps from her normal appearance to wearing some kind of outfit used to make a reference. What Good Luck Girl does well with this referential humour is in regard to how seamlessly it integrates itself into the show. The references and jokes are integrated without breaking the flow of a conversation or scene that is going on, and somehow adds to the scene by having it act as a device to showcase Momiji and the other character's eccentric personalities.

The characters in question are a lot of fun - while many of them are a little one-dimensional and based on one joke or personality type, the conversations and hijinks they indulge in lead the way to some great comedic moments. One character in particular is based entirely on the joke of being a background character; she is such a background character that she has little to no actual lines of dialogue within the show itself and turns up only in a segment at the end of each episode telling the viewer where she appeared in the episode. In a similar vein there are a few additional shorts that work their way into the end of a few instalments that give a bit more background information on a scene, or continues a joke that was set up during the episode.

With the show's comedic tone, performances matter. For those who watch their anime dubbed in English they'll be happy to know that FUNimation Entertainment have given the show a dub with great voice work, well-written jokes and great timing to match the craziness on-screen. Similarly, the Japanese language option is also great - however, given that this release was initially meant to be a Blu-ray only release and has now switched to being DVD only, it has brought up a few problems. Foremost amongst these issues is that the video is rather heavily compressed; this also seems to impact upon the subtitles making them hard to read at times. While they are not terrible to the point of being unreadable, they take time getting used to. This presents a problem if the show is being watched dubbed, as the subtitles for signs don't crop up frequently enough to get used to, meaning that some scenes need to be paused to properly read the subtitles. Other than this, the show looks good enough to get by on a DVD, but there are quite a few noticeable compression issues when a lot is going on in a certain scenes.

Putting those technical issues (and the inevitable badly-placed chapter markers! - Ed) aside the show is still fun and entertaining. The jokes, while mainly revolving around "getting" certain references the series is making, also have their charm. While the main plot of the series doesn't really get resolved within the scope of episodes the series has been given, it still manages to do enough with its premise to get the viewer invested in the characters and comedy. Those wanting a gag series with actual plot, and characters with eccentric and fun personalities, should really give Good Luck Girl a look.