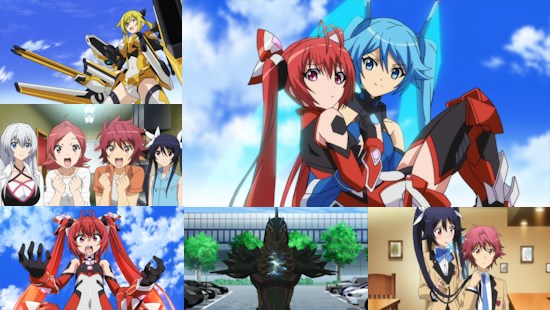 Let's be honest here - we all have our quirks; our kinks; our fetishes. This is particularly true for anime fans, where such interests are normally catered to extensively in some shape or form, with many of them finding their way into the very fabric of the shows we consume. Have a thing for girls in maid outfits? Plenty of anime will give you what you're after. Girls in glasses? Yep, anime has plenty of those.

In the case of Soji Mitsuka, he certainly isn't shy about letting the world know about his proclivities - he loves twin-tails, and I mean loves twin-tails. Such is his fascination with this hairstyle that he barely sees the girl lurking beyond, all of his gaze is drawn solely to those luxurious locks. As luck would have it, Soji seems to exist in a sphere with some notable twin-tails - one set belongs to his childhood friend (who one suspects only wears this style because of Soji's interest in them), while another even more impressive set is worn by his school's demure new student council president.

However, the joys of twin-tails are under threat, as is quickly revealed by a rather overbearing woman named Twoearle who approaches Soji as the potential saviour of his planet. According to her, the Ultimaguil are a parasitic alien race seeking to drain planets of their Elema, a material which can be farmed from what is known as "attribute strength" - unseen energy borne from... well, fetishes basically. As it happens, twin-tails are the strongest, most vital attribute strength of them all, and the Ultimaguil have arrived on Earth to suck the planet dry of Elema and, by extension, cause the extinction of twin-tails.

Needless to say, this simply isn't acceptable to Soji, and so it doesn't take too much to convince him to take up the mantle against this threat, although little does he know that to enter into battle will see him transformed into "Tail Red", an individual with power armour and a growing arsenal of weaponary that packs a punch. Oh, and it also transforms him into a girl. A girl with lavish twin-tails, naturally.

Thus, Soji (and a growing group of comrades) finds himself heading the effort to thwart the threat to the planet, inadvertently turning him into something of a global celebrity and making twin-tails into the hot new fashion, which itself has some unfortunate side-effects in this fight against the Ultimaguil. With some twists and turns in the offing and a surprise reunion in store for Twoearle, is it enough to put Soji off his beloved twin-tails?

Boil away some of its extraneous elements, and Gonna Be the Twin-Tail is effectively a "monster of the week" series - each episode, Tail Red finds herself facing a different foe, most of which comes down to the planet boasting their own fetish above and beyond the broader banner of desiring the power of twin-tails. Initially there's a certain charm to this - here is a series that wears its heart on its sleeve, and having its characters do likewise is both entertaining in its own right and offers up some amusing shifts in power during battles derived from those kinks. Ultimately though, this is an idea that outstays its welcome as the series progresses - to give it credit the show does its best to vary things up and find some different angles to approach its broader plot, but many of these attempts to change things up only really do so on the surface while the overall formula remains the same. Four or five episodes in I was having a great time soaking in Gonna Be the Twin-Tail's knowingly overblown silliness, but by the time its credits rolled on the final episode I was well and truly mentally checked out of most of what it had to offer.

When the series does hit the mark though, it certainly manages to be engaging. Soji's character could so easily have been depicted as an irredeemable pervert but he's actually a pretty decent lad all in all, and while other characters never really progress too far beyond their two-dimensional origins they have enough to them to bolster its entertainment value. There are plenty of varied enemies for the gang to fight too, with fun monsters providing some of the show's most memorable moments (poor Worm Guildy!) and comedy throughout. In the midst of all its quirky action-comedy fare the show even nudges at some pertinent social commentary, bemoaning the infamous Tokyo Youth Ordinance Bill while making a counterpoint on how unhealthy the overbearing pushing of your personal interests upon others can be. Hardly life-changing stuff, but it does play into the self-aware nature of a series that could so easily have been nothing but pure fan service yet instead proves to be surprisingly restrained much of the time in that regard.

It should be said that as a whole Gonna Be the Twin-Tail isn't particularly a visual tour de force - it's vibrantly colourful, and it smartly saves itself to add panache to its most noteworthy action scenes, but as a whole this is a series that is mostly simply servicable, and sports animation that distinctly drops in quality the further you get into the series (albeit not catastrophically so). Add some catchy opening and ending themes and a decent soundtrack to the mix though, and you have a limited but effective little series in presentational terms. This extends to the show's English localisation, with the series sporting a decent and energetic English dub, solid subtitles throughout, and equally good audio and video quality. Certainly, we have no qualms about the quality of this UK Blu-ray release.

While it won't necessarily live long in the memory, Gonna Be the Twin-Tail is certainly a series packed with character - watching its cast defend the Earth from such a ludicrous assault is initially fun but does become wearing over time, to leave a show that does a great job of selling a daft premise and jumping through all manner of logical loopholes but could do with either changing its formula more dramatically or simply being a shorter series rather than outstaying its welcome as it does. Still, as a light-hearted and self-aware take on the tokusatsu formula you could do a lot worse, particularly if you're looking for one with some mild lashings of fan service and Carry On style perversion into the bargain.

6
After a strong start full of character, this series tails off as it outstays its welcome but remains broadly fun to watch.
LATEST REVIEWS