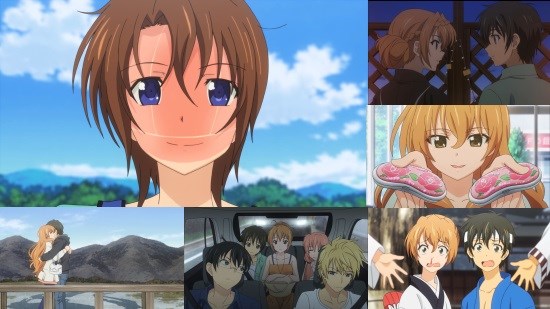 In case you’d forgotten, Golden Time is a romantic comedy drama following Tada Banri as he moves to university and begins a relationship with the unpredictable Koko. Part one of the series was pretty fun, with good comedy and an interesting set of relationships which was spoiled only by the needless inclusion of a subplot in which it turns out that Banri has amnesia, giving him a hidden past to uncover and a ghost version of his past self who periodically tries to take over the body in an attempt to get his old life back. Now part two has reached our shores and it’s time to see if the series can wrap up in a satisfactory manner.

When we left Banri and Koko they had reached a stage in their relationship which would have signalled the end of most anime romance series – a confession and a kiss. If you were expecting part two to further progress that relationship however, you’ll be left sorely disappointed. Whilst there are a few nods to this and several moments of brilliant comedy, mostly surrounding the gang heading off on a seemingly cursed beach trip, its Banri’s tedious amnesia plot which once again takes centre stage here as he struggles to come to terms with his past and how to reconcile his past relationship with Linda with his current one with Koko.

In a way the second half of Golden Time showcases the very best and very worst the series has to offer. The mini arc around the beach trip is sublime as the comedy shines before the dramatic elements come into play smoothly, taking the characters in new and unexpected directions. The amnesia storyline which dominates these twelve episodes however is dreadful - everything about it is clichéd and ill-fitting with the characters and other storylines, which is only worsened by the fact that it takes so long to resolve. One Week Friends set up, dealt with and paid off a similar storyline in about two episodes and did a vastly better job of it to boot, so having to watch Golden Time plod along through such bland, lifeless and unengaging rubbish for a full twelve episodes after having already made us suffer through it for much of part one is torturous. You’ll find yourself wishing for it be over long before you reach the end. As for the other storylines, well, they might as well not have bothered as every single subplot seems only to exist to help the series drag itself out to a full 24 episode run for all the impact they have on the involved characters.

Visually at least the series still looks great with Chiaki Kon (currently helming the third season of Sailor Moon Crystal) doing everything she can to keep you engaged and trying to get you into the right emotional state. The problem with that is of course that the comedic elements of the series go with the amnesia storyline about as well as Marmite and lemon sorbet.  The new opening and ending songs, both sung once again by Yui Horie (who voices Koko), are really good and she along with the rest of the voice cast are clearly trying their best with what they’re given to work with.

I honestly think that had they split this show into two separate series (ignoring the fact that they couldn’t because it’s a light novel adaptation) you’d have ended up with a vaguely average show about a guy with amnesia and a Toradora-beating romantic comedy that would be brilliantly received. As it is, everything that’s good about Golden Time is so quickly subsumed by the elements that just don’t work on any level that the goodwill it gathers is quickly lost. Even if you liked part one, and even if you want to see the awesome beach trip arc, it's tough to recommend you keep going with this series. Part one ends at a good enough stopping point that you can happily pretend the second half never happened.

3
Golden is not the right word for the time you'll have with this show.