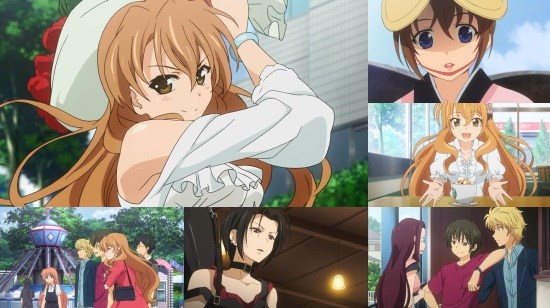 Fully-fledged anime romantic comedies are a pretty rare thing. Sure you get a lot of harem-style shows in which there is a romance theme and a few shoujo series which have a few elements, but all of these tend to have one thing in common – the series ends when the actual romance starts. Even our editor’s beloved Toradora (adapted from a work by the same author as the subject of this review) falls at this hurdle. Given this, series like Nana or Rumbling Hearts which move beyond the first kiss that tends to end most shows are under a fair amount of pressure to make things worth the wait, especially since they tend to be limited in just how far they can go in terms of depicting the on-screen relationship without becoming hentai. Now we have one of these rare shows hitting the UK in the form of Golden Time from Animatsu Entertainment. Will it melt the hearts of UK fans?

Tada Banri is heading to university in Tokyo ready to start the next phase of his life and to look for that special someone. Luckily for him, despite getting lost on the way he manages to run into Mitsuo Yannisagwa, a young man in similar circumstances. The two quickly strike up a friendship which moves in a whole new direction when Mitsuo’s beautiful self-declared girlfriend shows up on the scene having followed him to Tokyo. Before you start running your mind through the cliché engine you should hang fire as this isn’t the start of a love triangle - Mitsuo wants nothing to do with Kaga, who has some pretty striking stalker tendencies. Banri however could well be very interested in Kaga if he can get past a crush on club senior Linda and the clutches of the manic tea club!

Golden Time leans much more heavily on comedy that you would normally expect from this kind of show, but at the same time the drama doesn’t get left by the wayside and the balance between the two is really well done. It helps that all the characters are genuinely likeable and have some real depth to them. Banri has an actual personality rather than being some kind of audience insert character and even characters like Kaga and the ditzy Chinami are vastly more interesting that the annoying one-note stereotypes they could have been.

The plot moves on at a decent clip too, with the basic relationships that the series seems set to rely on all well in place before you hit the last of these first twelve episodes and with plenty of room to develop things further in the second half. The comedy is great too, with most of the gags working really well, especially when it involves the tea club who are so much fun you wish they’d get their own spin-off.

On the other hand though there is a (ghost) elephant very much present in the room, and it seems to be using the place as a bathroom to take a metaphor too far.... You see, for some unknown reason they decided to introduce a sub-plot in which Banri has amnesia and can’t remember much of his past including a relationship with a girl whom he meets again at university. Oh, and just to be even dumber there’s also a ghost version of him hanging around who has all his old memories. The whole sub-plot is a huge mistake as it doesn’t fit with the series, it’s not interesting and frankly the few dramatic elements it tries to introduce would be vastly more interesting without it. If he remembered the girl from his past right away the story would move along on exactly the same path but you’d have much more time to develop it and you’d have the character relationships hanging at a much more interesting point. Every time this sub-plot rears its head it’s like a slap in the face that makes you question why you were enjoying yourself so much a few moments ago.

On the production side the series looks great on our Blu-ray review discs. The character designs are great and all very down to Earth whilst still being instantly recognisable, and the animation quality is really good with J.C. Staff bringing their A game. The Japanese cast are on fire too, particularly Ai Kayano (Girls und Panzer's Saori) who invests Linda with some real feeling, making the show great to listen to. Musically, the highlight has to be the deceptively catchy opener Golden Time by Yui Horie (who also voices Kaga, incidentally) which will have you humming it for days afterwards.

Despite the big issues with the amnesia sub-plot which sadly looks set to plague the whole series, Golden Time thus far is great and a show that you should really take the time to check out. It’s unlikely from these first twelve episodes that it will ever reach the top of the heap of the genre given those aforementioned issues, plus the fact that thus far at least the relationships are a little too... chaste and clean given that these are a bunch of university students all living on their own. I'm not angling for anything erotic, but even in Japan surely someone would be sleeping with someone?

In short though, check this out if you’re looking for a really solid romantic comedy-drama and are fed up with all the cookie-cutter harem shows around.

7
A rare breed of anime romance that'll come close to making you fall in love.