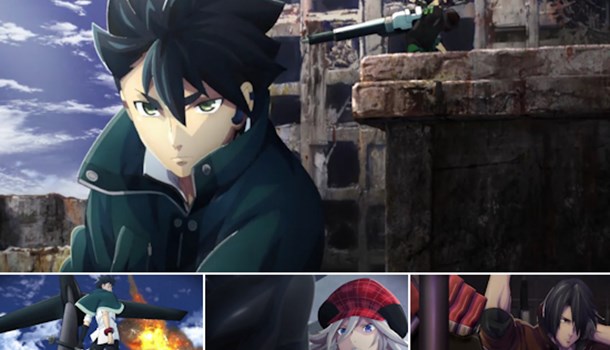 In 2050, a new phonemonon appears called the Oracle Cell. This fascinating new form of life is being studied by three scientists at the Fenrir Institute, and could be a clue to ridding the world of its energy problems... or it could be something far more sinister.

Flash forward to 2071, and we're first introduced to the post-event world of God Eater through a young man known as a New-Type, Lenka Utsugi, as he joins the Fenrir organisation in their fight against the plague of monstrous creatures known as Aragami. While mankind cowers in fear at these awesome, carnivorous beasts, Lenka must take to the battlefield with his team and ensure that mankind survives long enough to build a safe haven known as Aegis.

I have to hold my hand up and admit to being a huge fan of the PSP game this series is based on. Essentially a Monster Hunter clone in terms of gameplay, I found the story to be hugely compelling. The God Arc weaponry, which transforms from bladed weapon to firearm (with a nasty Aragami eating centre!) is a fabulous construct and it looks just as cool in the anime as it does in the games.

What struck me about this initial 5 episode arc is just how dark its prepared to go. Civilian casualties are not played off-screen, and in some instances the cruelty of the new world is quite hard to take. By episode four, Lenka is a part of the first unit and, on a mission, encounters a group of refugees. When taken back to Fenrir, the refugees are ejected at gunpoint because none of them are of use to the facility. Lenka's obvious distress is at odds with the stoic resignation of his comrades; it really shows just how monstrous humanity has become in order to survive.

Visually, the anime has a slight watercolour look to it, which I like a lot. The animation is nothing more than standard TV fare, but take a still and it looks beautiful. In episode three, where the team are trying to rescue a new arrival (the lovely-but-lethal tsundere stereotype Alisa Amiella) from a swarm of Aragami attacking her plane, there's a shot of a beast so massive it can't be made out - its simply breathtaking, and really puts mankind's plight into perspective.

The plot clips along at an excellent pace. Lenka is a likeable protagonist, full of fire and passion but not to the extent that he's annoying. He's rebellious when he needs to be but aware of the people around him. By episode five we see him face off against the strongest Aragami yet, and his determination is sadly not enough to save him. The bleak ending of episode five makes it anybody's guess as to who might survive and the direction the series may take - the standard ending animation replaced with a melancholy song and a black background.

The flashbacks to the science lab where Oracle Cells are being studied are beautifully handled - shot in black and white, the excited naiveté of the three researchers strikingly at odds with what we see in the current-day characters.

To date there are 9 episodes of this series available on Crunchyroll, and these initial five are extremely satisfying. A special note must go out to the soundtrack - while I'm not a fan of the opening tune, the in-show tracks are pounding and perfectly pitched. In this regard it reminded me very much of Guilty Crown, an anime that knew how to throw down a tune to accompany an action sequence.

Fans of the game will undoubtedly get more from this than casual fans, but I'd recommend it to anybody. I imagine God Eater has parallels to Attack on Titan, but not having seen the latter I'll leave it to comments section to hash that one out!

You can currently watch God Eater in streaming form via DAISUKI.

9
A genuinely gripping high-stakes series, and a must for fans of the games or just casual viewers.