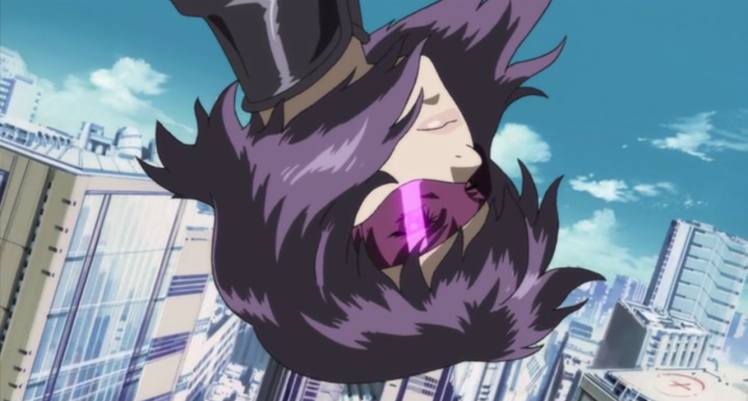 GitS:SAC has become a bit of a Christmas tradition for me in the last couple of years.  It’s both a relief and a little sad to finally have all the conspiracies that have been flying around my head for the past year finally come to a close.  A relief because I can’t think about the practical things like Christmas shopping until it’s finished, and sad because 2nd Gig has been such a highlight for me this year.

The three episodes on this final volume are a tour de force!  The opening scene reveals a static shot of a bridge with no sound or activity of any kind.  Then after a few seconds the screen erupts as the bridge is beautifully blown apart with the usual impressive animation that we’re so guilty of taking for granted.  It’s a marker and a message that you’re not going to be allowed to breathe for the next 70 odd minutes, and breathe you don’t!

For the most part, Production I.G. have used the same technique that they used in the first series; of keeping the viewer completely confused until the last moment when everything is revealed.  You could argue that this method of story telling is a re-hash that they’ve already used, but when it works this well, why should we care?  The subtle clues and forecasting that have been dropped in throughout the series all come together in these final three episodes beautifully.  The story dedicated to the Tachikomas A.I. origins for instance (#15), makes the final episode all the more powerful and if you’re not left smiling by the end of it then you have no heart!

The animation is by far and away the best we’ve seen in this series to date.  The action is relentless throughout and the accompanying music is perfectly placed.  You could accuse me of sensationalising a bit here but I honestly can’t remember being this impressed by smoke and explosion effects since I saw Akira in ’92.  It’s all just gorgeous stuff.

For a volume that has a lot of information to throw at you, they do a great job using the time available.  The story is told through four main plot lines as the Section 9 team split up to try and avert the nuclear threat.  This break-up of the action works well in helping to piece together the final events.  It also provides a great staging ground for some varied scenes and locales; With the Major and her team on the ground in Dejima, Aramaki and Togusa are left pursuing diplomatic solutions with Prime Minister Kayabuki, and of course, with the ever-playful Tachikomas providing support.  Even Proto, the effeminate Tachikoma engineer and Aramaki’s aid, makes a worthy mention.

There’s really very little to find wrong with this volume, if anything at all.  The story is coherent, fast paced and the conclusion is satisfying.  The characters, particularly Motoko, Batou and the Tachikomas, shine as brightly as they ever have done (and more so).  Finally, the action and music are both flawlessly moving.

Compared to the first series, 2nd Gig feels a little more focused in terms of how they forecasted the main story arc throughout the 26 episodes.  The flashbacks to some of the characters’ pasts breed a real affinity with them and this feeling is carried throughout the series.

This is Ghost in the Shell:SAC at its’ best ladies and gents.  If you’re even remotely interested in Sci-Fi/Cyber action then you would be a fool to miss out on 2nd Gig!

Character interviews with the Japanese cast for Gohda (Ken Nishida) and Kuze (Rikiya Koyama), as well as some Manga trailers.