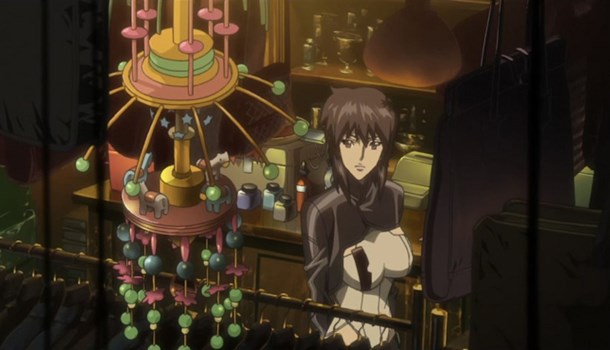 I always look forward to Ghost in the Shell arriving on my door and volume five is no exception. Great characters, intelligent writing and a stylish execution are always on the cards with this series and it very rarely fails to deliver.

We’re dropped into Taiwan for the first story as the Major is tracking down some leads on Kuze, the surviving member of the Individual Eleven group. While she’s there, she gets herself involved in some local trouble between a gang and a young boy who is infatuated with the enigmatic soldier. It’s a bit of a slow start but we get to see some glimpses into the relationship between Kuze and the refugees that he seems to inspire so much. Despite the obvious parallels between this and our own current world affairs, it’s a simple episode with Kusanagi in top witty form.

The next episode opens with Batou on top of the Victory Column in Berlin and it’s an education in melancholy from start to finish. Section 9 has been seconded to help track down an international terrorist with a particularly evil MO but this isn’t the highlight of the episode. The cool blue jazz, soft strings and the snowy backdrop, along with Batou’s usual cynical examination of the world, really highlight one of the aspects that makes Ghost in the Shell so great. The action isn’t overwhelming here either but it’s a superb episode nonetheless.

The last two episodes centre on the over-arching Individual Eleven storyline as Kuze plans for the refugees start to emerge. While Section 9 set out to try and capture him, we’re briefly introduced to two new recruits (Azuma and Yano), as well as the realisation that the Major somehow knows Kuze but she’s not sure from where. Ghoda makes another cryptic appearance along with two very silent and very ominous looking cybernetic gentlemen, but as you’d expect we’re still not given any clues as to what he’s actually planning. There are some great gun battles in these two episodes as well, with the Tachikomas zooming around doing what they do best.

I must admit, I really have no idea how this series is going to pan out. After a super intriguing start to 2nd Gig with the Individual Eleven group (which has subsequently been blown over a bit), I have no idea where the writers are going to take this. With two more volumes to go, I find myself expecting quite a lot from them.

Nevertheless, this is a solid volume with lots of replay value and leaves you hanging on the edge for more.

There’s nothing much to shout about in terms of Extras; a couple of interviews with the director and the voice actors (Motoko and Togusa), but that’s it.

8
Not quite up there with previous volumes but still an excellent release and well worth every penny.
LATEST REVIEWS