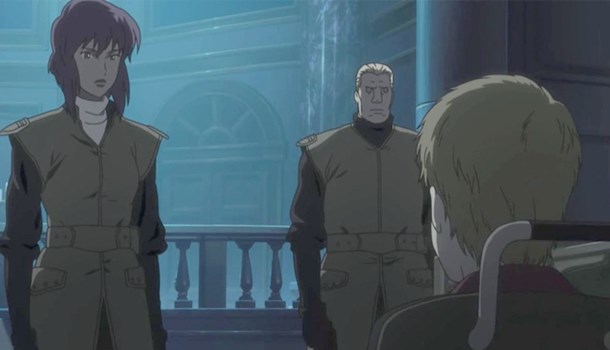 The fourth volume of Shirow's cyberpunk vision seems set on addressing the lack of backstory behind the lesser-utilised members of Section 9.

The first story focuses on Pazu, the Major's go-to-guy for underground intelligence. Understandably little is known about him, as he keeps to the shadows and treads where the law can't, or won't. follow. The case of a murdered "Doll artist" seems to tie in to the Individual 11, but is it a clue, or an unrelated and deeply personal matter for our mystery man? Though somewhat predicatble when all is said and done, the stylish tech-noir of this episode is enjoyable stuff and well worth a second watch.

The Tachikoma's also get a look in, with an episode that finely balances their enthusiastic technobabble with revelations about their creation and, ultimately, their operation. Although combat apparatus with the voice of a child shouldn't really work, the little machines really do grow on you after a while, and although this has the lowest replay value on the disc, you'll still be saying "awwww" by the end of it.

Another under-developed character, the sniper Saito, is given his own episode too. During a game of poker with theTachikoma mechanics, he recounts the story of how he first met the Major during WWIII. It's fun to see other members of Section 9 too, notably her right-hand man Batou and Ishikawa. It's also interesting to hear soldiers from Japan, England and America sniping at each other about their various weaknesses as soldiers. It's a well scripted and thoroughly entertaining episode.

Finally we larn about the mysterious man we've seen a number of times (attempting to assassinate the President, on the rooftop during a mass suicide of Individual 11 members etc). We're given a full examination of his background as a soldier during the war, which has much resonance in the wake of the real-life Iraq occupation by Western forces.

The fourth volume eschews the same quality of animation, intelligent scripting and entertaining investigation as previous volumes, and as such should be invested in asap.
9
Retains the high standards set by previous volumes, one of the best examples of the genre in the UK.