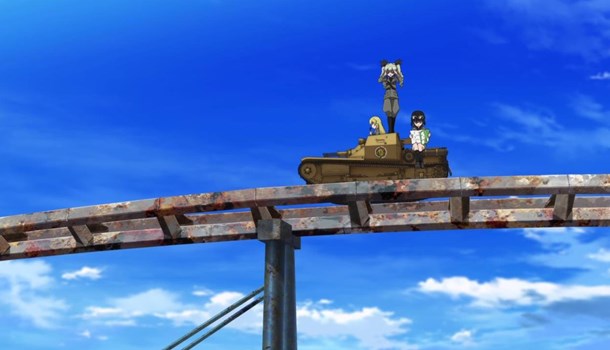 We love a bit of Girls und Panzer here at UK Anime towers, I described the series as “Fresh, funny and charming from start to finish.”, it has even featured in our annual awards on a number of occasions. However, I got a  fair bit of stick in last year’s podcast for arguing against Girls und Panzer der Film winning every award we could throw at it, and I had some - albeit limited - success convincing the others. Don’t get me wrong, this film is a lot of fun - and we will get to the reasons why I don’t believe ‘award winner’ is an appropriate label for Girls und Panzer der Film in a little while, but first I should tell you what it is all about.

Set some time after the end of the series - and after the OVA Girls und Panzer: This is the Real Anzio Battle! (which isn’t being released until after this film, d’oh!) - Girls und Panzer der Film opens with an an exhibition match, to commemorate Ōarai Girls High School's victory in the 63rd sensha-dō tournament. This sees Ōarai teaming up with Chi-Ha-Tan Academy against the combined forces of St. Gloriana and Pravda. Thus, if you enjoyed the spectacle of Darjeeling and co. sipping tea in the bowels of a Mk IV (A22F) Churchill, then this film has you covered from the outset. Naturally Chi-Ha-Tan’s gung-ho approach, and habit of charging into battle with little thought to strategy, proves an insurmountable obstacle for Miho’s plans of victory.

As if to rub salt into the fresh wounds of defeat the Ministry of Education pick that moment to renege on their promise to keep Ōarai Girls High School open, claiming that it was just a verbal agreement with no legal standing. Shortly afterwards the school ship, and everything remaining aboard, is seized - though the girl’s tanks are rescued, thanks to a little intervention by Saunders Girls High School. Thus, the scene is set for the Ōarai girl’s to once again rise to a seemingly impossible challenge, and try to win back their school for a second time.

To call the setup for Girls und Panzer der Film contrived would be something of an understatement, though it is far from the most ridiculous thing in the film’s 120 minute run time. For good or for ill this is Girls und Panzer amplified. Girls und Panzer der Film is fan service in it’s purest form: It takes all the things we loved about the series and squeezes until every last drop of entertainment is wrung out, but there is no filter applied - in this film anything goes. The animation, the soundtrack, the tanks, the antics, the frivolity, the… everything is turned up to eleven - at times to the point where any suspension of disbelief isn’t just in serious danger but is shot out of the window like a shell from a tank. Take, for example, the utterly ludicrous Ferris Wheel scene: In which a Ferris Wheel defies all known laws of physics, and rolls around for what seems like an eternity, to save the Ōarai Girls from certain doom. Or the Finnish BT-42 tank losing all of its tracks and pulling a ski.

However, nobody watches Girls und Panzer expecting gritty realism, and nonsense in tanks is par for the course. Though, at least for this reviewer, things are taken a too far into the realm of the ridiculous here, which is to the film’s detriment. Of course, this also means that the film is aimed squarely at existing fans, to the point where I suspect it would be utterly impenetrable to anyone who hasn’t at least seen the series. That said Girls und Panzer der Film remains as funny and charming as the series, though - for obvious reasons - it no longer feels as fresh. It's a bit of fun to brighten up your day. A popcorn film where, as long as you don’t think too hard, you can just sit back and enjoy the ride. If you can stomach the ridiculousness of it all then there’s no doubt that you will be entertained. So, while Girls und Panzer der Film shouldn’t be winning any awards, it will certainly put a smile on your face.

7
Girls und Panzer turned up to eleven, it is a wild, utterly ridiculous, but ultimately entertaining ride.
LATEST REVIEWS