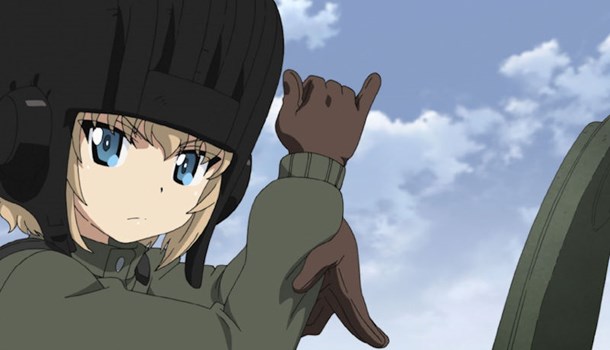 3 years. That's how long it's been since I saw Girls Und Panzer Das Finale Part 2 in a cinema in Tokyo. 3 whole years with no new Girls Und Panzer. That's far too long to have to go without another installment of one of the greatest and most consistently good anime franchises of the last decade. But now, part 3 has arrived from MVM and to make up for the long wait, it is, at long last, time for Continuation High School to roll out!

Picking up in the middle of the Oorai Vs Chihatan battle from part 2, this installment wastes no time in getting you back into the action - there's certainly no concession for newcomers to be found here. A nighttime battle in a dense forest means that both teams must rely on new tactics to win the day as Oorai’s tanks become swiftly separated and Chihatan continues to learn how not to charge.

Once the battle is over, Miho and the gang split up to see who's coming out on top in the rest of the tournament to be their rivals in the semi-finals. Here we get an absolute treat of a battle between Anzio and St Gloriana which we wish could have been allocated a whole episode to itself because it's so good. Then it's finally time for Mika and Continuation to make their presence felt. This is the first time we've seen more than one tank from them, and they prove to be absolutely deadly, leading us into the biggest cliffhanger the series has ever crafted.

It has to be said that whilst this new installment is excellent, it does suffer a little from being so compressed. There's enough content here to fill half a series and some of it gets rushed through. The long gap between episodes means that the creators seem to have felt compelled to try give each of the dozens of characters a moment to shine. That being said, the cast are as fun to spend time with as ever and the tank battling is just as over the top as you could wish for.

The fact is that this is just Fun with a capital F. The OVA keeps you grinning and on the edge of your seat the whole way through. It looks fantastic even if the CG isn't quite as impressive as it was a few years ago, the soundtrack is - as always - fantastic and the colossal voice cast are on form here.

This is exactly the kind of pick me up fans have been waiting for and they’ll happily devour every minute of it before sobbing as they realise how long the wait for part 4 is going to be. Newcomers will find little here but that aside, this is near-flawless.

10
The perfect pick-me-up for fans who will be left desperate for more!