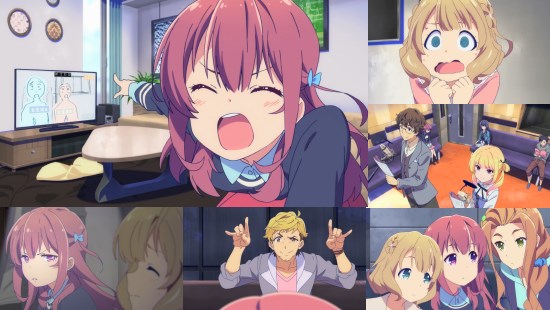 We've discussed it a number of times on this site before, but the domestic success of Shirobako has led to a small but notable explosion of shows set within various facets of Japan's entertainment industry - most recently, New Game took a light-hearted look at video game development, while A Seiyu's Life peeked in on the world of voice acting. In comparison, last autumn's Girlish Number sits somewhere between Shirobako and A Seiyu's Life, with a story that is ultimately very focused on voice actors while still finding plenty of time to cast its eye over the world of anime production.

Chitose Karasuma is the star of the show - and she'd certainly give herself top billing without hesitation too, as an upcoming newbie in the voice acting business with a seemingly inexhaustible amount of self-confidence to the point of being obnoxious. You don't even need to dig too far beneath the surface to find Chitose's disdain for others and willingness to do anything to get ahead and become the star she believes she's destined to be, much to the exasperation of her manager and older brother (himself a failed voice actor) Gojou.

However transparent Chitose's personality might be, it seems that her confident is about to prove well-founded as she finds herself as the prime candidate to take the leading role in a forthcoming anime production. Her enthusiasm soon turns sour however, as it appears that she's been made the figurehead of an utter train wreck of a production filled with major issues and in the hands of a producer who is almost as self-serving as Chitose is.

If Shirobako is a love letter to the joys of anime production that sometimes glosses over or makes light of its heart realities, Girlish Number is that show's cynical younger brother that clicks its tongue at any suggestions of positivity before giving you a lecture on how broken everything is - exactly what you might expect of the author of the equally cynical My Teen Romantic Comedy SNAFU. Indeed, it seems that the disastrous production within Girlish Number is itself inspired by author Wataru Watari's experience on the adaptation of another of his works, Qualidea Code, adding even more bite to the narrative of this series.

The real magic of this series however is how it manages to take all of that negativity and pour it all into a mould that makes it work. On paper, you should hate Chitose with every fibre of your being, but as you spend more time with her character and see her develop you can't help but end up rooting for her - her stark view of the realities of the business she's in are actually a refreshing contrast to the wide-eyed naivety of others, and as the series progresses you start to see the fragile girl desperate for attention and praise beneath that obnoxious, cock-sure exterior. By the end of the show, you're left with as well defined a character as you'll see in anime, and chances are you'll have laughed and cried along with her as she tries to find her way.

Thankfully, the supporting cast of the show are all just as interesting - Chitose's fellow cast members are all more typical of the profession, but they too also all have shadows of some kind cast over their careers that they're trying to sweep under the carpet, and even the show's inept producer and Chitose's brother have stories to tell that make them more sympathetic characters than they might have been. That Chitose is, often indirectly or just plain accidentally, the enabler that allows these individuals to come to terms with the troubles causing them strife is only another reason to leave you cheering her on.

Although all of this might sound like a downer, that really isn't the case - much like Shirobako (while we're stuck on that comparison), Girlish Number does an incredibly good job of wringing humour out of the various disasters that befall its cast and the production nightmare they're trapped in, all further accentuated by Chitose's inner (or sometimes outer) monologues that illustrate just how rotten everything is and that everyone is trying to skirt around the true extent of the situation to maintain harmony. With lots of snappy dialogue and the sniping between characters intensifying throughout, there are plenty of laugh out loud moments that makes the series a joy to watch.

The show's visuals are perhaps where the show is at its weakest... well, assuming we ignore the show's incredibly annoying ending credits and song, that is. While its character designs are solid and it doesn't really need to stretch itself visually, there's some weird use of digital filtering effects and spells where characters drop off-model just a little too frequently to the point where it can be mildly off-putting. Still, there are lots of great expressive character faces, and the show's attempt at create its own in-series badly animated show is a lot of fun, especially when the cast then seek to deconstruct (or make excuses) for this shoddy production. The voice cast also do a great job, and Chitose's actress in particular works well when it comes to mixing her normal performance with more stilted deliveries when Chitose is in the booth herself.

If Shirobako is a series that makes you want to leap up from your seat and do whatever it takes to follow your dreams and achieved all of your wildest, craziest career goals, Girlish Number is the perfect show to come home to after a bad day at the office - sit down with Chitose, snipe about your workplace and colleagues and mock them for not seeing through all of the things you're smart enough to pick up on. It's a delightfully cynical counterpoint to the cheer and positivity which a lot of anime traffics in, but its real magic is that it delivers all this with a laugh and a smile that doesn't mask the truths it speaks or the diminish the problems some of its characters face. Not only is it fun to see Chitoge's self-centred take on the world, it's the fact that she's so often right that makes her such an unlikely heroine of sorts, and a delightful lead to this smart and sassy series.

You can watch Girlish Number in streaming form on Crunchyroll.

8
A deliciously cynical take on the anime and voice acting industry which is decidedly heartfelt beneath its wisecracks.
LATEST REVIEWS