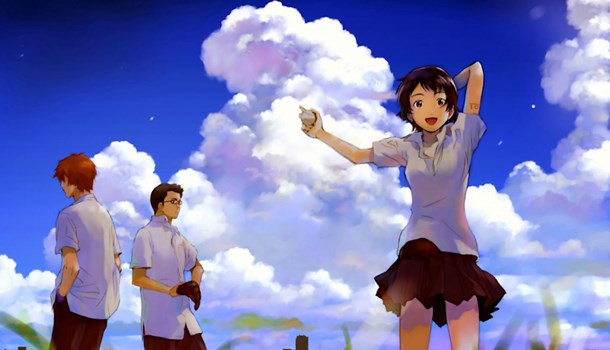 Girl Who Leapt Through Time (The)

It's the kind of question that we've all asked ourselves at one point or another - If we had the ability to travel back in time, where would we go?  Who would we see?  What would we change about our own lives?  Of course, this is but an idle dream for you and I, but it becomes a reality for 17 year-old Makoto Konno.

Makoto is pretty much your average teenage girl, with a normal life to match - A bit of a tomboy, always oversleeping and almost late for school, annoyed by her younger sister, and more interested in hanging out with her friends than studying or thinking about her future.  However, even the most normal of girls can have a bad day, and we join Makoto on a particularly disastrous one, the only highlight of which was finding some weird item in an otherwise empty science room.  When this bad day appears about to turn even worse, to a seemingly life-threatening degree, all of a sudden Makoto finds herself dumped unceremoniously back a couple of minutes previously, averting any danger to herself.  Is she going crazy, or did she just jump back in time?  Further experimentation reveals that yes; somehow Makoto has acquired the ability to travel back in time.

This is where the real beauty of The Girl Who Leapt Through Time begins - While most stories that deal with time travel love to take a grandiose view of it, a la Doctor Who, The Terminator and using time travel to save the world, the naivety of youth gives this story and its protagonist a view of time travel in a microcosm.  Never mind revisiting important dates in history, plotting to kill Adolf Hitler or anything like that; Makoto's first concern is to beat her sister to the portion of pudding waiting for her in the fridge that she missed out on the night before.  Makoto simply has a ball with her time leaping ability, getting perfect test scores, turning that disastrous day into a great one, having ten-hour karaoke sessions and becoming a bit of a dab hand at baseball.

The trouble is that life is rarely that simple - Every little thing we do and decision we make has consequences, and the seemingly minor changes made by Makoto begin to have more and more profound consequences further down the line, both for herself and those around her.  Her attempts to run away from a difficult situation with her friend Chiaki only makes things worse, and before we know it the previously happy-go-lucky Makoto is left miserable and alone - and that isn't even the worst of it....

This may all sound like a simple concept for a movie, and to be honest it is, but its genius is in that simplicity.  Makoto's time leaping efforts hit all of the right notes - They're frequently hilarious (even more so given the literal physicality required to "leap" through time), occasionally poignant, and each and every time you'll be left trying to calculate the consequences of her actions.  The story as an entirety possibly loses a little towards the end, pulling out the stops perhaps unnecessarily to give us a happier ending, but that barely detracts at all from what is largely one of the most entertaining, beautiful and innovative stories that has come out of anime in quite some time.  While the movie never seeks to moralise in any tangible fashion, you do walk away with a renewed appreciation for your actions and how they affect others in even unintended ways, and somehow despite its far-fetched major plot point you can't help but find yourself empathising with Makoto to a huge extent, particularly towards the end of the film and some of its more sad or desperate moments.  I'm always happy to recommend new movies or anime to people, but having watched this particular effort I find myself left with feelings stronger even than that... I want to beg you to watch this movie, I'll invite you into my house to see it, I'll bring the DVDs to you - You simply have to watch it, it really is that good.

Thankfully, the UK DVD treatment of the movie is as sumptuous as such a great piece of work deserves, with a shed load of extras that are actually well worth having if you love the film spread across its two discs, and a choice of stereo or Dolby Digital 5.1 audio tracks in both English and Japanese (spoilt only by some slightly flaky subtitling which seems to miss out a handful of occasionally quite pertinent lines).  I do have one criticism of this DVD release however - Whoever designed the text layout for the disc's menus needs to be taken outside, flogged, and shot.  Harsh words, but borderline unreadable text on menu options is simply unacceptable - I want to watch a DVD, not do a word search.

Anyway, with those minor gripes aside I have to close this review with the glowing praise that The Girl Who Leapt Through Time deserves - It's beautiful, it's funny, it's thrilling, it's fantastic, and even its sometimes basic animation belies a wealth of expressiveness that runs right through it.  It's a wonderful, wonderful film, and a perfect example of a great concept delivered with aplomb.  I take back what I said about letting you use my DVDs - Buy this release yourself; it's worth every penny and then some.

10
One of the best anime movies I've ever watched, given an outstanding DVD treatment - A bona-fide, 100% must-have release.
LATEST REVIEWS