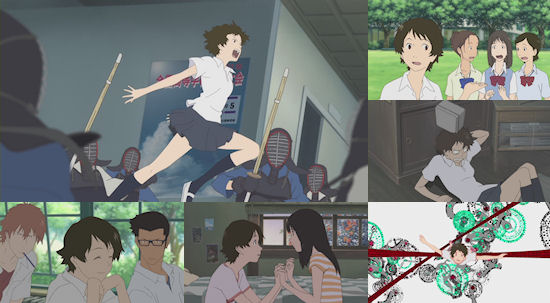 Girl Who Leapt Through Time, The (Blu-Ray)

It was over two years ago that I first reviewed The Girl Who Leapt Through Time upon its UK DVD release, and to this day it remains the only title I've ever granted a ten out of ten score on these hallowed pages.  Now, it's time to revisit Mamoru Hosoda's first directorial outing attached to the Madhouse production studio to see whether it still engenders the same reaction from me via its shiny new High Definition transfer and Blu-Ray release.

I won't delve too deeply into my thoughts of the film itself, leaving that to our coverage of that initial DVD release, but to recap The Girl Who Leapt Through Time is a modern-day version (or pseudo-sequel if you really want to be picky about it) of Yasutaka Tsutsui's novel of the same name.  At the centre of the story is seventeen year-old Makoto Konno, a care-free tomboy who broadly enjoys her simple high school life, and for whom even the worst possible bad day isn't enough to dampen her spirits too far.  However, Makoto's life looks set to change forever when the latest in a string of accidents to befall her on the day in question leaves her with the ability to, quite literally, leap through time.

After this power saves Makoto from certain death at the hands of a railway crossing (albeit unbeknown to our protagonist), a suggestion from her aunt leads to her learning exactly how to control this time-leaping ability, and before we know it Makoto is leaping all over the place - reliving her bad day and ensuring it's anything but, and using it to dodge otherwise awkward moments to her advantage.

However, everything has its consequences, and Makoto's enjoyment of life as a time leaper eventually becomes soured as it fractures her relationship with her best friends and causes untold misery to others as her decisions reverberate every more powerfully throughout the story and those around her.  Come the end of the film, it seems as if Makoto has finally managed to manipulate everything towards the best possible conclusion, only to find the world she's shaped taking an even more distressing turn...

Even returning to this film a couple of years after my initial review, I find it hard to shift my analysis of it downwards - even on repeat viewings it still feels exquisitely paced, expert in the way that it twists and turns the story around Makoto's decisions, and absolutely confident in its emotional appeal as it shift effortlessly from the comical to the dramatic and on to the poignant.  Even Makoto herself is an excellent example of top-notch characterisation - her responses to situations feels completely human and understandable throughout, and for all her naivety and even arrogance at times you can empathise with her from beginning to end and root for her no matter what.

In short then, The Girl Who Leapt Through Time is a movie that you really should watch without a shadow of the doubt if you haven't done so already.  This brings us to the new Blu-Ray transfer we're looking at today, and while this isn't the kind of visually intense movie that absolutely needs a High Definition treatment it's still a treat to see it in all its 1080p glory via a crisp, clear transfer that lets you enjoy what's going on on-screen without any of the annoyances that can crop up in DVD anime releases.

Perhaps more impressive than the video transfer is this Blu-Ray edition's audio track - maybe I just have a better sound set-up (or improved hearing) than I did two years ago, but both English and Japanese audio (the film has a rather good English dub by the way) sounded excellent with superb use of all its audio channels.  Again, the film isn't an intense workout in terms of audio, but it adds a little more to the immersive nature of the movie.  The only area where The Girl Who Leapt Through Time loses out to its two-disc DVD release is in terms of extras, which are conspicuous by their absence here - a shame for the completists amongst us, but hopefully not enough to detract from the quality of the movie itself.

If you're still yet to watch The Girl Who Leapt Through Time, then the chance to snag this great movie on Blu-Ray as part of a double pack with Summer Wars (the only way this Blu-Ray release is available at the time of writing) makes it a bargain beyond compare, with the two films available on this format for under £20 if you shop around - a deal that I can't recommend highly enough.  If you already own this film on DVD however, you'll probably need to consider whether you're hungry enough to own the film again in a High Definition format to splash out on it a second time.  Personally, this is the kind of film I could buy numerous times without a second thought, but of course your mileage may vary.  Either way, this is one of the greatest anime movies of all time in my humble opinion, and for new viewers in particular you'd be crazy not to consider it.

The Girl Who Leapt Through Time is currently only available on Blu-Ray as part of a double pack with Summer Wars.

10
An absolute must-see movie, now with a High Definition transfer which makes for a release that is very much worthy of your consideration.
COMMENT AND DISCUSS
blog comments powered by Disqus