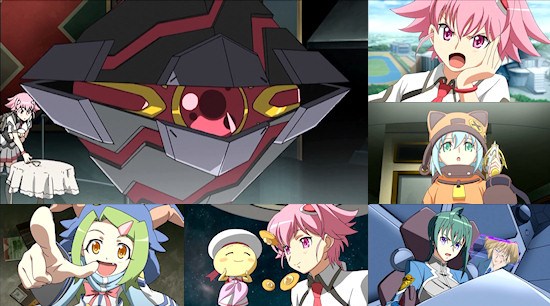 Girl Who Leapt Through Space, The - Vol. 1

It's tough trying to figure out what to do with your life when you grow up - a problem which is very much compounded by finding yourself surrounded by hugely successful sisters that run the gamut from a model to a scientific genius via the administrator of the powerful Shishido Foundation which takes the family's name as its central point.

Such is the hardship facing the protagonist of The Girl Who Leapt Through Space, Akiha Shishido - a would-be successor to the Shishido Foundation's power and wealth, but a girl who really isn't sure of her place in the world. When her eldest sister (and the aforementioned foundation administrator), Kazane, starts talking about arranged marriages, Akiha has finally had enough and decides to run away from home into the depths of space - a decision which sets about a life-changing set of circumstances.

Before she knows it, Akiha and her friend-cum-servant-cum-blobby-space-alien Imoko find themselves dragged into a situation involving the paranormal division of the Intercolony Police Force and a rogue "brain colony" - a massive spacecraft designed to home humans controlled by a super-smart Artificial Intelligence.  Well, I say super-smart but the AI under discussion here, named Leopard, is questionable in the intelligence department at best.

While the bulk of these early episodes revolve around Akiha and Leopard as the former becomes a reluctant assistant for the latter, there are plenty of threads which snake out from this main and often seemingly frivolous storyline to take in the ICP and various factions within it, rival Brain Colonies, the Shishido Foundation and its myriad sisters, and even Akiha's "destiny" as the girl of the show's title.

Although this broad scope to the series promises a deep, multi-faceted story, I'm not sure that the reality of The Girl Who Leapt Through Space quite adds up to in this manner - instead, what we're left with is an occasionally confusing jumble of ideas and concepts that have been glued together haphazardly in the hope of forming a coherent narrative, with mixed results.  It's only towards the end of this third volume that the threads which join some of its disparate elements begin to bond together, although even this feels a little haphazard.

If those looking for a deep, serious story might be disappointed here, we should probably be quick to point out that this isn't a series which takes itself seriously in the slightest.  Thankfully, this makes certain elements of the series a huge amount of fun, most notably everything that surrounds our errant AI Leopard.  In short, Leopard is effectively Code Geass' Lelouch vi Brittania (right down to the use of the same Japanese voice actor) given a partial lobotomy and shoved into a mechanical cube of sorts, leaving us with a deep-voiced braggart with a penchant for flourishing gestures but a complete incompetent when it comes to actually achieving anything.  Leopard is (a couple of useless ICP members aside) the butt of much of the show's humour as he causes chaos or manages to win the day through sheer luck, while even the phallic shape of the colony he controls has fun poked at it by Akiha and friends going on missions to retrieve Leopard's missing parts - parts which include his "Golden Orbs" followed by a "Golden Orb Warmer"....

Looking at it from afar, The Girl Who Leapt Through Space is a bizarre mixture of elements - part mecha series courtesy of the spacecraft piloted by various characters, part fan service show given the skimpy outfits a number of individuals wear, part action-adventure series, part comedy, and the list goes on.  This is a series that tries to incorporate something for everyone, but much like an attempt to bake a cake by throwing everything in your cupboard into it the final result is hit and miss - when this first volume concludes by veering off into a bizarre baseball filler episode, you really aren't sure where you are with this show any more.

Disengage your brain somewhat however and there's no denying that the series is pretty fun to watch at times - the animation quality is pretty decent (and this UK DVD transfer and subtitle-only presentation is equally good enough despite the annoyance of long, unskippable pre-menu sequences), there are some gorgeous character designs on show and parts of the series concept is actually pretty nifty.  As entertainment for entertainment's sake, this first volume of The Girl Who Leapt Through Space is hyperspeed-paced and with enough going on to relieve a few hours boredom with little trouble, while also serving up enough typical anime archetypes and character tropes to try and drag viewers into its tangled web.

Had the series been a more targeted and concentrated affair it could well have done something really special with some of its ideas and flourishes, but as it stands The Girl Who Leapt Through Space is a bit like painting with potato prints - it's stupid and messy, but deep down you know you're going to have quite a bit of fun with it.

Japanese 2.0 audio with English, French and German subtitles.  The sole extras across these two DVDs are textless opening and ending credits.

6
It might be an almost schizophrenic mish-mash of genres, ideas and elements, but there's just enough humour and entertainment value in these episodes to make the series so far potentially worthy of a quick peek.
LATEST REVIEWS