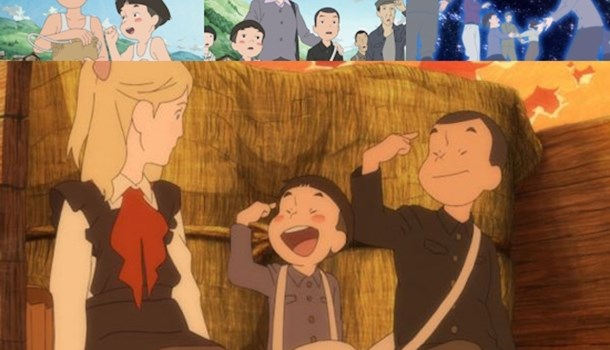 It's 1945, and the end of World War II is (unknown to most of those involved) drawing to a close for Japan. Not that the war seems to have struck as viciously for the residents of the tiny island of Shikotan; at least, not as it's seen through the eyes of two young brothers, Junpei and Kanta, as they run, play and simply do what children do in spite of the conflict seemingly moving ever closer to the place they call home.

August 15th 1945, however, is the moment that marks the end of the war - what proves to be a moment of relief for the Allies only brings more security for their enemies however, as concern spreads across the island regarding what will surely be an American invasion and occupation of Shikotan. As it is, it isn't the United States that lands on their beaches, but rather the Russians, and what starts out as a low-key occupation soon becomes increasingly difficult for the island's residents.

Of course, even this seems like little more than an adventure to the children - food may be scarce but there's still enough for them to get by, the occupation of houses by Russian troops and their families simply means that living in barns and stables is an exciting new arrangement, and the arrival of Russian children means there are some curious new friends to play with.

In particular, Junpei finds himself becoming attached to the daughter of the commander of the occupying Russian forces, a girl named Tanya who also becomes equally enamoured of him. Even with food becoming more scarce and the remaining Japanese residents doing all they can to hold onto their supplies, fun and friendship seems far more important than anything else going on amongst the grown-ups - however, it's inevitable that the adult world will collide and disrupt these times of innocent at some point, and when that moment comes it's particularly brutal for both Kanta and Junpei as they lose friends, family and eventually their homes.

It's hard to know where to begin talking about Giovanni's Island, such is the ambition, scope and achievement of the film, but let's start where it is easily most successful - in its humanisation of all of the characters depicted within its story. Given that the film is almost entirely based upon a true story this isn't surprising on one level, but it's incredibly important to stress how even-handed and reasoned the film is throughout. Yes, the war and its aftermath brings with it horrors and atrocities, but beyond the prejudices of its characters it never stoops into a "them and us" mentality - the Russian occupiers aren't evil, they're simply people getting by in their own way, and where some are greedy others are full of generosity and human spirit. Similarly, the island's residents are just as human in their depiction, making mistakes and errors of judgement and not simply serving as a set of victims that the viewer is encouraged to feel bad for.

Ultimately though, this is Junpei's story, and how its told is powerful in so many ways - after a realistic introduction which sees an elderly Junpei returning to his homeland for the first time, we then push back into the memories of his childhood; memories which are deliberately exaggerated in some places or loose and foggy in others, just as one's memories tend to be. This treatment works superbly throughout the film - it builds him into a character you can empathise with quickly, builds his relationships with others in an equally fast and sturdy fashion, and then uses that expert character-building to tremendous and eventually heart-rendingly powerful effect. Its imagery might not be as painfully stark as, say, Grave of the Fireflies, but its reserved treatment of the film's most harrowing scenes somehow only add to its intense power.

The film's visuals echo that previous comment about the film's focus on recalled memories - the mainstay of its animation is simple but fluid, which may take a little getting used to (and is probably something of an acquired taste) but is utilised effectively whether its to bring out the film's moments of levity, intense emotion or simple, childish joy. From its character designs through to its imagined flights of fancy based around Kenji Miyazawa's Night on the Galactic Railroad, Giovanni's Island walks the line between visual appeal and not distracting the viewer from the crux of the tale it's trying to tale almost perfectly.

In fact, our only real criticism of Giovanni's Island is its constant references to Night on the Galactic Railroad - these references do offer a useful recurring theme throughout its story, and there's an obvious connection between the events in that book and this film, but at times they are perhaps laid on a little thick and threaten to detract from a tale that is incredibly strong in its own right and require no further explanation or adornment. Thankfully, that threat of the main story and characters being lost beneath the weight of those references never comes to fruition, leaving us with a movie that absolutely deserves all of the praise it gets.

Although our starting point might be to recommend Giovanni's Island to anyone who has found themselves engaged by the likes of Grave of the Fireflies and Barefoot Gen, or to those who have an interest in World War II history as a whole, that isn't where our recommendations end. Although this film is set in the dying days and aftermath of that conflict, this isn't really a story about war - in fact, it's a story that we can all attach to personally far more readily than that, for this is a story about family; about friendship; about life itself.

It's this ability to show the joy, pain, triumphs and hardships of the world through a child's eyes that makes Giovanni's Island a precious gem that all and sundry should see - it's an experience that is as enlightening as it is fulfilling, and it won't be one that you'll forget in a hurry.

Giovanni's Island was screened in Glasgow and Edinburgh as part of Scotland Loves Anime 2014, and at the BFI in London. It will be released on home video by Anime Limited in December 2014

9
An incredibly affecting story, incredibly well told - this is surely a future classic that will be spoken of for decades to come.
LATEST REVIEWS