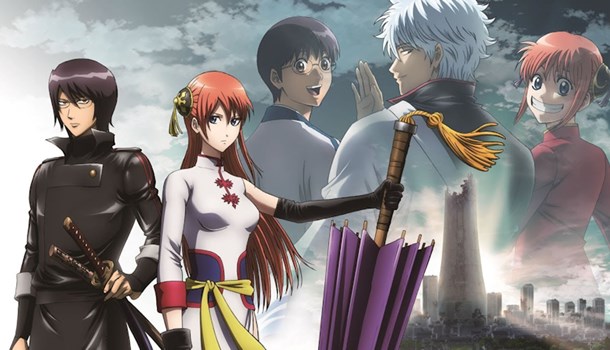 Gintama is a franchise that, if I still had the nigh-on infinite available time of my younger years, I would adore. There is so much of it! And most of the time it is genuinely funny in a way that a lot of anime comedy shows simply cannot emulate! Sadly, being a wage slave I don’t have the time to keep up with the unending series other than the odd dip back into it every now and then. But a movie length self-contained production? Sure, I have time to watch that!

Gintama: The Movie, much like the series, follows the exploits of lazy sweet-tooth ex-samurai Sakata Gintoki and his friends who he runs an “odd-jobs” handyman service with in a bizarre alternate historical version of Edo era Japan. Their normal routine of lazing around and insulting each other is broken when Elizabeth, a giant living duck costume, comes to ask for their help in locating their mutual friend Katsura as he has vanished and the police are being less than helpful. Gin blows off the job for another offered by a swordsmith and his sister, who ask the protagonist for his aid in locating a missing sword of great power. As the hapless group of friends investigate these dual mysteries, they quickly find that they have gotten themselves into great peril, perhaps the same peril that might well have found Katsura...

To get this note out of the way quickly - to get the most out of this movie you will need to have seen at least a little of the Gintama series beforehand. While the characters themselves are well introduced, both in the natural progression of the film and in a supremely self-deprecating scene at the beginning, there is zero explanation of the setting and it’s history, something that is key to understanding the conflicts that arise - said introductory scene even mentions how only fans of the TV show will watch the movie, so I suppose this is a statement of intent in a way.

So how does the movie stand up? Honestly, shockingly well. One of the things about it that stuck out the most to me was its fluid and confident pacing, which was honestly a shock as the movie is compressed down from TV episodes and yet the movement from one scene to another felt seamless. The movie really grabbed a hold of me and held me tight for the entire dramatic arc, and it was only at the end I had the wherewithal to look at my watch and realise that eighty minutes had flown by without me noticing. For someone as restless and fidgety as me, this is a real accomplishment. Most of this is down to the way it neatly switches from one plot thread or character group to the next with assured ease, keeping a lot of various elements all present in your mind without making them outstay their welcome. While the plot will not win any awards for originality or shocking twists (this is a Shounen Jump property after all, and it follows the same tenets as movies made for these franchises), by the time everything starts to wrap up it feels natural and well co-ordinated.

Outside of massive chunks at the start and end of the film, the comedy element of Gintama is relegated to secondary importance for the duration. While it still has a great streak of absurdity and irreverence that help the film along if you are expecting gags out the wazoo you may want to stick to the TV series.

Another element that really helps the movie is how nice it looks, especially given that my main point of reference for Gintama is the budget-minded TV series. These are the same characters and settings as the TV show, but the level of care and and attention lavished upon them is really a notch above. This really should not be anything surprising given the higher budget of a movie production but it makes such an impact that I couldn’t help but be affected by it. This is especially true during fight scenes, where the extra detail really helps to draw you in. The movie does have a rather bizarre fondness for showing you a painfully detailed gout of blood glistening in the air, something that pops up with almost humorous regularity.

The film is not without issue however. While a minor gripe, the subtitle track has some overboard uses of swearing which felt really jarring to me and unfortunately detracted from the film itself.

The last ten minutes of the film deserves its own paragraph, and so it gets one. After all the dramatic plotting is done, Gintama goes back to what makes it such a joy to watch - painfully funny meta-humour about anime and itself. To outline any of the gags would suck all the fun out of them, but suffice to say that it contains perhaps the most outlandish pair of cameos you can hope to see in an animated film. For a film that opens with a still exterior shot mocking itself for a good five minutes plus, the ending even manages to outdo this in a way that leaves the fourth wall a sobbing broken wreck.

I really, really enjoyed watching Gintama: The Movie. I hope they make many more, as the increased budget and tightened focus of the format really brought out what I like about the series and the cast (side note: There is a second movie in production, due to come out in 2013). The dedication to absurdity, the bemused self-awareness, and the surprisingly engrossing plot really grabbed me and kept me glued to my sofa for the entire running time of the film. If you have ever watched Gintama then you should be able to pick this film up and run with it and if not, well, now’s a good time to start.

5.1 English and Japanese audio with English subtitles. No other extras are present.

9
A great package for fans, and a good excuse to start for those who are not already.
LATEST REVIEWS