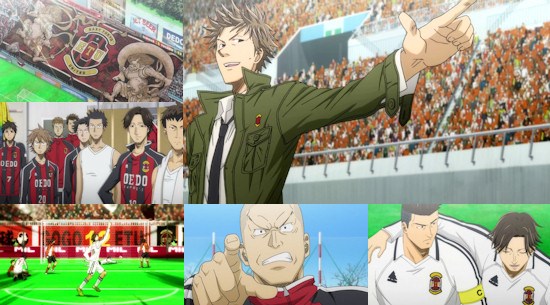 England might be out of the World Cup now after some disastrous performances, allowing the football fever that has gripped the nation to subside, but if you're a hardcore fan of the game who views the end of the tournament in a couple of weeks with horror, fear not - The remainder of your summer can still be filled with all of the highs and lows of the beautiful game.  No, not by stocking up on Arsenal end of season DVDs, but courtesy of one of Crunchyroll's more recent additions; Giant Killing, Studio DEEN's adaptation of an award-winning, football-based sports manga.

Giant Killing begins, of all places, in England, as we witness the beauty of the FA Cup as a team of minnows take on Portsmouth in the competition.  This team of plucky underdogs in managed by one Takeshi Tatsumi, a Japanese player with a distinguished career who is just starting out down the road as a football manager.  Clearly, his unique coaching style and abilities are already garnering interest in the world of football, which brings us to the reason for this trip to England - East Tokyo United, a struggling team in the Japanese league, are in the hunt for yet another new manager to halt their current state of free-fall, and former star for the club Tatsumi seems like the perfect fit.

So, our heroic new manager accepts the jobs and arrives to find a club in turmoil, with what might as well be a revolving door policy on managers, a dwindling fan base and demoralised players.  To make things worse, it soon becomes clear that Tatsumi is viewed as some kind of Judas amongst older fans and players who remember him leaving ETU at the height of his career to play elsewhere.  Can Tatsumi turn things around with a club that is a shambles both on and off the field?

At this point, you might be forgiven for assuming that the answer is a straightforward "yes", but make no mistake - This series is no Roy of the Rovers.  Thus, don't expect for East Tokyo United to launch straight into spectacular victory after spectacular victory as their domestic season starts, despite Tatsumi's proclamations to the press which might suggest otherwise.

As with most sports manga and anime, Giant Killing is just as concerned with its characters as it is the sport being covered itself - Thus, Takeshi Tatsumi's enigmatic and quirky character proves to be a perfect centrepiece for the series (who might well remind football fans of a certain Jose Mourinho in terms of both personality and tactics at times), particularly as we see it come into conflict with ETU's gruff old captain and former team-mate of Tatsumi on the one hand, and young players like the pacy and talented yet unsure Tsubaki.  Throw in relations with the press and rival managers, and there's always plenty of human interest to be found - Enough so to even capture the interest of some non-football fans, I would wager.

Of course, it's the football mad who will find the most to love about this series, which does a fantastic job of recreating a big match atmosphere - You'd be forgiven for jumping out of your seat and celebrating a goal or berating a referee for a poor decision, forgetting entirely that it's just an anime series that you're watching.  The on-field tactics of the game also feature heavily, with an entire story arc towards the end of Giant Killing's first half revolving around some clever tactical nous on Tatsumi's part.  It's the kind of thing which can change a game in real-life, and it's brilliantly recreated here.

This heady mix of personality clashes and the beautiful game makes for a fascinating series so far that might not catch your eye in terms of animation quality (although it doesn't do a bad job of illustrating its on-pitch antics), but certainly does when it comes to the personalities and conflicts that it throws up.  Your mileage will doubtless vary depending on your personal interest or lack thereof in football, and non-football fans could well be left bemoaning the drawn out nature of some of the story arcs and games, but if you're able to find time away from the World Cup to sit down with Giant Killing for a while you might even find yourself enjoying the anime exploits of East Tokyo United more than the actual football on the TV.

8
The beautiful game beautifully realised - Football fans will lap it up, and even those without any interest in the game could well find plenty to like.
LATEST REVIEWS