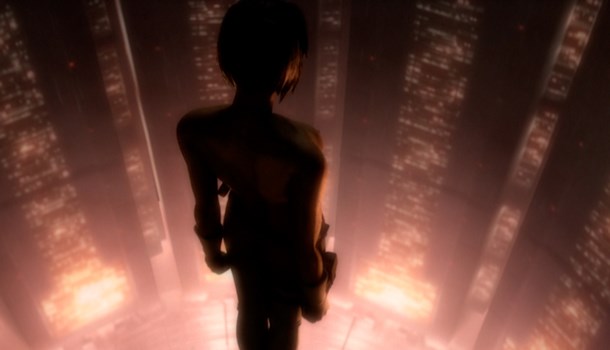 Ghost in the Shell 2.0 is the newest casualty of the strive to make all the classics of the past compatible with today’s 1080p high definition multi-channel society. This release is intended to kick start the series to a new set of fans by promising to “Seamlessly merge traditional cel animation with the latest computer graphic imagery”. Sorry, but no.

Ghost in the Shell was, i think, the third anime feature film I ever saw. I didn’t get it then, and it took the purchase of a A4 sized book which was called a manga in order for me to get the show and enjoy it fully. But it was so damn cool and it showed me what was out there for my science fiction obsessed brain to digest. But unfortunately, in my opinion, this new release lacks something from the original and that something is rather predictable.

The 1995 release of Ghost in the Shell was cel shaded with CGI used purely to enhance the production of the film. In this original production the hijinks of Major Motoko Kusanagi, from her semi-transparent naked building dive in the opening sequence of the film to the battle with the arachnid tank, was fully cel animated which was the only method available at the time. A very good job was done of the animation and made the original film the classic it is regarded as today. The only issue that ever existed in the original release in the UK was the issues regarding the Audio and Video being out of sync which was limited to a specific production run of the DVD release. (Anyone want to purchase mine from me?)

In the 2.0 or Remastered release, several key scenes have been replaced with CGI animation. The city scenes and backgrounds which were a little understated have been replaced with CGI which looks stunning, almost better than the opening to Blade Runner. But in addition to these atmospheric enhancements they also decided to reanimate some of characters using CGI, which presents something of a discontinuity, as I found out. This is where i begin to talk about breasts again...

I can completely understand why CGI was used to enhance the series. Ok, the city scenes were basic in some of the scenes, and this new release makes everything crisp and clear when you pause the DVD. But why did they reanimate the Motoko scene at the beginning of the film? The scene which I am referring to is where Motoko stands atop the target building, she strips naked and then jumps. As she falls her skin turns translucent showing just a smidgin of nipple and aureole as she enters her terminal velocity. She passes the target window, blows it open with her gun, and continues falling, naked and invisible into the night. It’s beautiful. Only now, its fully CGI, and Motoko and her extremities look plastic, shiny and odd compared to the cel animated scenes. To make matters worse, with the cutscenes inside the building still cel animated, the new CGI scenes look out of place. It looks rushed, it looks incomplete, and it makes me sad. But, I refuse to let me get this down!

Rant aside, this remastering of the classic Ghost in the Shell film comes with the second film, Innocence in a lovely two Blu-ray disc set. Ghost in the Shell has been remastered well ignoring my gripes about that specific scene. The art is crisp. The colours are sharp and it makes a film which was perhaps looking a little dated look new again. Besides, with the addition of 5.1 channel sound, I can now enjoy the sounds of Kenji Kawai as it was meant to be heard. This is a Blu-ray set which I cannot ignore, and it may just give me the excuse I needed to replace the slightly knackered out-of-sync DVD version I have. (Again, any takers?)

If you haven’t seen Ghost in the Shell before, where have you been? Buy it now, and enjoy one of the true classics of our time. And, if you feel so inclined, you can play the Wachowski brothers game where you take a shot for every time you recognise a feature of Ghost in the Shell which was used in the Matrix Trilogy. I have been very drunk because of this game...

9
It’s Ghost in the Shell, its the least it deserves.