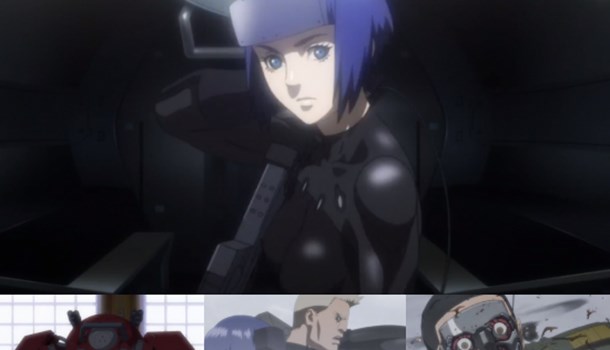 Of all of the multitude of anime and manga considered as classics, Ghost in the Shell must surely be one of those held up to be the most "sacred", thanks not only to its seminal film which has remained a must-see film for anyone with a budding interest in anime but also the stupendous Stand Alone Complex. Given the high regard in which it is held, just how do you go about reinvigorating the Ghost in the Shell name?

This is a question that you could easily imagine has haunted Tow Ubukata, the man charged with providing a new angle on the franchise via Ghost in the Shell: Arise. The prospect of going back to Major Motoko Kusanagi's roots and watching her build up the team that ultimately comes under the jurisdiction of Public Security Section 9 is an appealing one, but it's fair to say that Arise struggled with the weight of the expectations upon it, never setting the imagination alight or provoking thought and discussion as its forbears have for a multitude of reasons. However, there were at least sparks of promise and interesting ideas spread throughout Arise and its Alternative Architecture TV offshoot, which leads us into this 2015 film which takes perhaps the bravest step of all - daring to simply call itself Ghost in the Shell.

The ambition of the film is clear from the very start, introducing itself on the cusp of a pivotal period in mankind's history - a time where the industry for cyborg brains and bodies has become so massive that it now dwarfs national boundaries, governments and laws. So, how should one police this behemoth born from the capitalist machine when it holds more power than the entities created to both sit above and represent us all?

There are two trains of thought to this quandary. One is to double down on the powers exhibited by the cybernetics industry and allow it to create new private corporations tasked with policing the system and maintaining law and order. The other, to use government bodies and finances to better equip said governments to police the world of cybernetics and those immersed within it. This debate is mimicked by both Kusanagi herself - who is on the side of providing oversight independent of those with a financial interest in events - and her former superior in the army Kurutsu, who is all set to throw her hat in with whoever will provide her with a suitably impressive paycheque.

With her squad now fully formed and freshly funded, Kusanagi is to flex her new muscle and springs straight into action to diffuse a hostage situation caused by government military officials who are concerned about being disbanded in the face of privately-funded organisations. Between her own skill and those around her, everything goes swimmingly... for a while at least, until events turn about-face to leave what should have been a rescue without any fatalities turn into a bloodbath. Even worse is occurring just blocks away within the city however, as Japan is about to see its prime minister assassinated for the first time in its history.

What follows is an incredibly dense story full of twists and turns, as Kusanagi and her crew seek the truth behind these incidents amidst the possibility that it's all part of a plot from renowned hacker "Fire Starter"... or worse, that Kusanagi herself is involved.

Oh, and when I say dense, I mean dense. Ghost in the Shell packs a huge number of machinations and shifting allegiances from the elements involved in the story at hand - this is a film you'll want to watch more than once to really grasp all of its events and topics at hand, in the grand tradition of the franchise. Having spent much of Arise seemingly trying to grasp the Ghost in the Shell nettle and bring it under his own control, Tow Ubukata finally seems to have succeeded here - his desires to pay homage to the original film remain under wraps (until the very end, at least), and rather than revisiting familiar territory he actually manages to weave some incredibly interesting ideas here. We've already mentioned the tug-o-war that is the axis around which the film's narrative revolves, but by the end of it another important topic is that of cyborg obsolescence - a cyborg may not be able to "die" per se, but if the upgrade path of technology veers away from compatibility with your existing augmentations and parts, then you're sentenced to the living hell of watching your body literally fall apart from disrepair until you meet your end.

Throw in the usual cavalcade of hacking and espionage, add some surprisingly well-placed comedy in its interactions between the Major's team members, and sprinkle some genuinely impressive action scenes through the film, and you have yourself a very good entry into the world of Ghost in the Shell - a movie which has all of the hallmarks you could ask of the franchise but with enough new twists and through lines to ensure that this is something fresh rather than another copycat.

The only caveat to this enjoyment may be whether or not you've watched all of Arise - you can probably get away without seeing Alternative Architecture, but the main OVA series does offer some relatively important insights into a number of pivotal characters who appear throughout this film that you won't be able to get a handle on without that prior viewing experience. With the third and fourth instalments of Arise due to hit the UK shortly, that shouldn't be too big an issue if you do get the chance to watch this movie in the near future provided you can handle the fact that Arise is a very uncertain - and often unsuccessful - affair.

Another area where Arise has been much criticised is in terms of its animation and character designs, but even here this theatrical treatment feels like the moment where everything finally falls into place and the look and feel of this take on Ghost in the Shell works surprisingly well on the big screen. If you're not a fan of the new-look character designs then you'll probably never be persuaded by this point, but with an eye to the big screen this is undoubtedly the best chance they've been given to shine and it really works well whether we're tripping through cyberspace, pondering the case at hand or in the midst of flying fists and bullets.

As hopeful as I was that Ghost in the Shell Arise had been building steadily towards something noteworthy, I was still more than a little cynical as to whether this film could pull it off given previous missteps by those handling the series. It's both a relief and downright uplifting to see this film work and work well - sure, it may not reach the dizzy heights of Stand Alone Complex at its pomp, but it's an engaging, enjoyable and fascinating film that seems to have learned from all of its past errors to create something that is not only undoubtedly a film worth of the Ghost in the Shell name, but also an outing that carves a place for itself in its own right.

Given the way the film ends you have to wonder whether this is also the end of this particular project, and suddenly - ironically - it seems like a shame that this iteration of Ghost in the Shell might have come to a close just when it's found its stride. Nonetheless, if this is the last we see of Ubukata in this role, he's finally managed to produce a piece worthy of a place within the franchise, even if it inevitably can't live up to its theatrical namesake.

8
Nothing can best the original, but this Ghost in the Shell film is at least inventive in its own right as well as a fascinating story revolving around the world and characters we all love.
LATEST REVIEWS