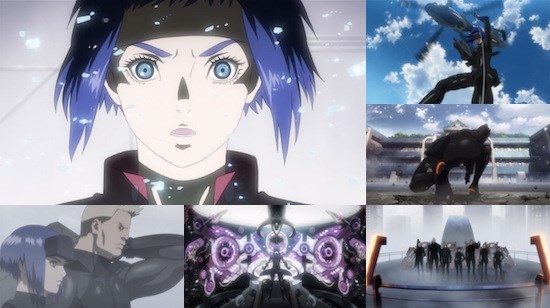 I would imagine that Ghost in the Shell needs no introduction to the vast majority of our readers. Between the original movies, Ghost in the Shell: Stand Alone Complex and the more recent Ghost in the Shell: Arise there’s no shortage of prior art to whet the appetite of would-be watchers of this "new movie". The original Ghost in the Shell is considered a classic, not just of anime but of science fiction cinema in general; Stand Alone Complex is arguably one of the top ten anime series of all time, and certainly one of the top science fiction anime series. This poses a challenge when approaching Ghost in the Shell: The New Movie - it is simply not possible to only judge the film on it’s own merit. Rather, you are forced to make comparisons against it’s exceedingly distinguished forebearers. The question then is not just whether the film is any good, but also whether it is as good as it’s predecessors.

Ghost in the Shell: The New Movie is ostensibly a film about the early days of Major Motoko Kusunagi’s team, and their escapades before they join the now synonymous Public Security Section 9.  However, this being Ghost in the Shell all is not as it first appears and there are many layers to be peeled away from the plot before we can even attempt to comprehend the true meaning behind the events in this film. Set against a backdrop of declining military spending and soldiers who find both their jobs as well as their cybernetic bodies becoming rapidly obsolete, the Major secures some rare government funding and her team are tasked with handling a tense hostage situation. Unfortunately for the Major, what first appears to be a simple hostage rescue turns into a full fledged investigation as a corporate and government conspiracy unfolds, causing even the Major’s own motivation and actions to be called into question.

Obsolescence is at the core of this film, with corporate interests looking to maintain profits by artificially slowing the progress of technology and intentionally causing older technology to become obsolete. This leaves many cybernetically enhanced individuals, cast aside after the recent war, unable to afford upgrades and starved of spare parts for “obsolete” technology. This results in many finding themselves forced into terminal decline. It is around this central premise that the film weaves the tendrils of its story.

It is at this point, I feel, I should mention that seeing Ghost in the Shell: Arise is a prerequisite to gaining a full appreciation of The New Movie. While the film is perfectly enjoyable without, you will miss out on many of the deeper themes running through it. Therefore, without that prior knowledge you are likely to find yourself scratching your head at the motivations of some of the characters, who receive a lot more air time over the course of this film’s precursor series.

Much has been said of the new look given to Motoko and the gang in Ghost in the Shell: Arise. That new look remains here but has matured. The Major and Batou, in particular, now feel much more familiar. The animation quality in general is, as you might expect, excellent. However, perhaps surprisingly, it is in the clever blending of CG and traditional animation that the film really shines - especially in the action scenes, which are simply spectacular.

While our reviewers found the series itself to be somewhat underwhelming, Ghost in the Shell: The New Movie easily represents the pinnacle of the new Arise continuity and manages to raise the rest to new heights in the process. When considered alone it is an interesting film with spectacular action sequences, but taken as part of the wider continuity it takes on a deeper more satisfying meaning.

Unfortunately, perhaps, while The New Movie pays homage to Ghost in the Shell’s past, it never manages to stamp it’s own authority over the franchise in the same manner as the original movie and Stand Alone Complex did before it. What we are left with then is akin to a competent tribute act - it is not the original nor does it strike out on it’s own. That said, does it really need to when the source to which it pays homage is so good…? When all is said and done Ghost in the Shell: The New Movie is a competent entry in the Ghost in the Shell universe. It is beautiful to look at, its action is spectacular, it’s plot is deep and full of twists and turns and perhaps most importantly of all: it feels like Ghost in the Shell.

8
All the ingredients of a competent entry in the Ghost in the Shell universe: great animation, intrigue and no shortage of cybernetically enhanced action.
LATEST REVIEWS