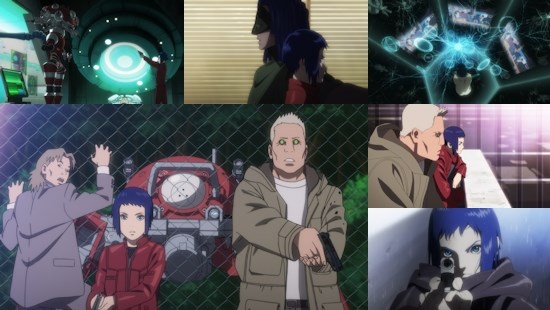 Ghost in the Shell is a franchise that requires no introduction to most people - and in a sense, that's its biggest problem. Such is the expectation surrounding anything to do with this thoughtful sci-fi property that it's a decidedly hot potato for anyone who might want to work with it, and it's perhaps this that has ensured it was so long (relatively speaking) since Kenji Kamiyama's hugely successful Stand Alone Complex proved that it was possible to take the intelligent discussion expected from the Ghost in the Shell name and make it entertaining in a TV anime format.

High pressure job it might be, but to ignore the franchise would also be to leave money on the table - enter Ghost in the Shell: Arise, a new series of OVAs helmed by Tow Ubukata (of Mardock Scramble fame, amongst other things) and with a view towards following the formative days of Major Makoto Kusanagi as she finds herself drawn into a newly-created unit that we know of as Section 9.

Set in the year 2027, this opening instalment of the series sees Kusanagi still working for the military, although it isn't long before she ends up bumping heads with another familiar face in the form of Aramaki. In short, the latter is in the midst of an investigation of a man who turns out to be Kusanagi's superior, who is suspected of taking bribes - suspicions with also lead to questions about the nature of the man's death. Although these two individuals clash over the exhumed body of Mamuro, their ultimate goals quickly converge into a desire to clear his name - something made more pressing by the worrying presence of some rather creepy mechanical landmines within what should have been his coffin.

Despite their mutual interests, Motoko continues to go it alone in investigating her superior's death alone, and it's through her eyes that we follow this investigation as it brings her into contact with more of her soon-to-be colleagues and the entire affair grows ever murkier. By the end of the film, the fact that we're following events through Kusanagi's eyes becomes pivotal, as we're again faced with a question mark over "what is real?", and not for the first time in this franchise.

As we mentioned in our opening comments, the sheer weight of expectation upon anything Ghost in the Shell weighs heavily on any new offering bearing its name, and this immediately causes some issues for this first instalment of Arise. Most obviously is the film's visuals, which feel cut-back and far simpler than we've seen from even Stand Alone Complex - the positive spin-off from this is that it offers opportunities for some fantastic, fluid action scenes when required, and the overall look of the new character designs aren't unpleasant; however, you can't quite shake the fact that a new Ghost in the Shell project should look a little better than this.

Get beyond this initial concern however and you have yourself a very solid futuristic police procedural of shorts in this first episode of Arise - an intriguing story with some satisfying twists that touches on some of the kind of subject matter that you'd expect Ghost in the Shell to handle in its world of cybernetics and where the possibility of hacking brains creates all kinds of questions around the reliability of memory and the sense of self.

Ironically, it's also this treading upon territory so familiar to Ghost in the Shell fans that also works against Ghost Pain - there are no shortage of moments within this opening film that feel far too much like Tow Ubukata simply paying homage to the original films, with shots that recreate iconic moments from the original film and ideas that are lifted from it entirely. As an opening gambit to reintroduce this world and cast of characters we can certainly cut it some slack for going down this route, but future instalments of Arise will really need to strike out in some new directions to avoid simply feeling like a needless re-tread of previous material.

As a result, Ghost Pain doesn't manage to reach the heights of either the original Ghost in the Shell movie or Stand Alone Complex - but who could realistically expect it to in a single hour? Adjust your expectations a little, and Ghost Pain is a well-paced and fitting beginning to Arise that introduces its characters in a way suitable for old and new viewers and places them into a fascinating futuristic world that is, in many ways, the true star of the show. There's still a lot of work to do be done with future instalments of Arise to bring it up to the standard we expect from the Ghost in the Shell name, but Ghost Pain has done the groundwork to set us up for a series that hopefully dares to be different from what has gone before in all the right ways.

Ghost in the Shell: Arise 1 - Ghost Pain was screened in Edinburgh as part of Scotland Loves Anime 2013.

7
It feels a little too simple visually, and threatens to become bogged down in its homages to the original film, but this opening endeavour is a strong foundation upon which Arise can hopefully build significantly.
LATEST REVIEWS