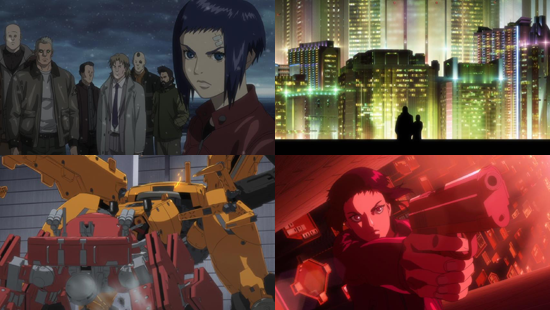 Major Motoko Kusanagi is continuing with her plan to establish her independent cyber-strike force which will be free to investigate threats - and eliminate them - without being yanked back by a government choke-chain. It's a difficult job however, as she continues to be stonewalled by Chief Aramaki of Section 9, who dislikes loose cannons and isn't prepared to authorise the Major's new unit as an investigative team instead of dangerous virtual vigilantes. As much as the Major has sought to escape the restrictions of the army, and as much as the interconnected world offers limitless potential, it seems that good old-fashion paper-shuffling bureaucratic procedure will smother her new unit in the crib. A breakthrough comes, though, in a spate of terrorist bombings conducted by a separatist group alongside the emergence of the Fire Starter, a mysterious hacker who appears to have the ability to rewrite memories - something which is impossible... officially. The unique talents of the Major and the diverse team she's assembled will be the key to unlocking the secrets of the Fire Starter - and the name is very appropriate, because he is stoking up the smouldering embers of the Major's troubled past back up to a raging wildfire.

Unfortunately, Tow Ubukata's promised-for second wind will less blow you away than it will barely ripple the grass, and weak fanning of the flames dampens Arise down again. Following the utterly abominable disaster that was last year's Psycho Pass 2, Ubukata's star is continuing to fall with the poor plotting of Ghost in the Shell: Arise, and it's becoming increasingly apparent that this sort of layered cyberpunk conspiracy is just beyond his abilities. Ubukata has been coasting for a long time on the reputation of Mardock Scramble,but that momentum is finally running out.

These episodes do give themselves some real-world topicality with their backdrop being protests on the availability of water, a steadily-growing modern issue particularly in China. However, it's a fairly superficial touch that adds a splash of background but doesn't really provide any insight, particularly when the actual plot appears to revolve around a corporate turf war between rival weapons developers over who gets the contract. It's a great deal of convolution over what is ultimately a pretty simple affair, and its feels less like engaging elaboration and more like exasperating obfuscation. It acutely feels as though there are scenes missing that would have connected missing dots (the Major is attached by an army assassin - later, she encounters the very same assassin during a formal meeting and doesn't even blink or follow-up on it), and in other places running time has been wasted overthinking minor issues - for instance, Borma spends an entire episode standing in a burnt-out room working out how a person's prosthetics could make him a living bomb, but he needn't have bothered when his insight wasn't needed as it's helpfully telegraphed by a man literally starting to fizz and pop like a cartoon (the poor guy gets flung down a lift shaft while he's pleading for help, which gave me a shocked laugh at how bluntly callous, if necessary, it was). Plot twists feel half-baked - like how the climax of Border 2 dismissed the entire philosophical basis of the first movie in thirty seconds, Border 3 feels acutely like the whole of Stand Alone Complex's 2nd Gig crammed into a 50-minute TV movie, while Border 4's fears of "Ghost Dubbing" appears to spend half an hour marvelling at the concept that someone can have a split personality like it's a post-singulairty insight rather than a common horror trope. The Major's whole insistence on an "independent" unit is nonsense when she's constantly going cap-in-hand to Chief Aramaki for funds and resources. Unlike the memetic personality of villains like the Laughing Man, the Fire Starter is completely anonymous and half-forgotten in his own show.

The idea behind Arise is that it's exploring the start of the Major's cybercrime-fighting career and how the group we know as Section 9 came together - and it's the failing of Arise that it really does so in a superficial and perfunctory way. In Borders 1 and 2 of last year's release the Major's recruitment strategy was either ridiculous (hiring people who have repeatedly betrayed you) or just plain non-existent (she didn't even say a single line to either Ishikawa and Borma before they joined her team). Borders 3 and 4 unfortunately don't repair this illogicality.

Throughout the third episode the Major's colleagues repeatedly moan about bad equipment, long hours, low pay and how they'd make much more money in other fields, grumbling which she testily hangs up on so she can go redecorate her house with her boyfriend. You're left wondering why they don't just vote with their feet and drop the Major's Mickey-Mouse operation to go for those other opportunities - the answer unfortunately being that they're the characters and they've got to stay otherwise it will cost the studio money to draw new ones. Batou and Togusa show more rapport ribbing each other about their outdated fashion sense than with the Major, who's supposedly the glue binding them together.

Perhaps it's meant to be a plot point - this is early in the Major's career, she's a fallible human not a peerless prodigy; still on the rebound after years taking orders in the army, she hasn't yet worked through her touchy pride which makes her hard to work with. Still, it feels like I'm making a rationalisation to excuse it rather than an explanation to understand it, and it ignores the fact that she isn't a vacant one-pipper who hasn't taken one step outside the academy before being thrown into the fray - she's, y'know... a Major. An experienced officer, and one who's already fought in multiple wars. Man-management is kind of supposed to be an officer's thing. The team do eventually come together to take down a rampaging mech at the climax of episode four, but it does feel that it's too little, too late.

What's most successful about Ghost in the Shell: Arise isn't so much the cyber-conspiracies but that the Major has a working relationship. I don't mean that she dismisses the conventions of harem-anime herbivores with cybersex (and although there is a small amount of that, it's conveyed in subdued and actually pretty tasteful dream sequences) but participates in just sheer simple domestic activities of a couple like unpacking new furniture, trying new foods or going out for a stroll together after a party. They're short but sweet segments that do flick back the curtain of code-lines to show the functioning of the world beyond them. That said, though, cyborg pillow talk leaves a lot to be desired. "I might fry your brain if you infiltrate me". Saucy.

In Stand Alone Complex, cyborgs reaffirmed their sense of self by becoming extreme materialists, understanding themselves by their relation to their possessions, needing lots of goods for the reliability of more points of reference. In Arise the Major solves her identity crisis by adopting a sort of self-handicraft - becoming an obsessive tweaker, enjoying tune-ups as one might a day spa and ensuring that every part of her body has been fiddled with, even adjusting the simplest common off-the-shelf components, so that no part of herself can be dismissed as assembly-line robotic. Another topic which certainly has resonance to viewers who find that their fingers are twitching with the urge to refresh Facebook after as little as a minute away from their smartphone screens will be the suggestion that not wanting to be "cyberised" - having an implant in your brain to connect it to the net - is a mental illness. In fairness to Ubukata, as much as the A-Plot of Arise is unconvincing, through details like these he has made a genuine contribution to the imaginings of a cyberpunk world and he deserves credit for that - although a significant amount of it is still conveyed in the tell-not-show that is this franchise's curse and still not one fully dispelled here.

When Arise does get back to moving it does so well. Apart from a badly-fumbled massacre of protesters in the beginning of Border 4 - a horrifying event which is made stultifying by tepid direction (showing the event at telescopic distance while banner-wavers still cycle through their animation sequence in the background) - combat is done with plenty of explosive impact. The great feature shown earlier in the series continues here with how the Major sustains actual damage as she's fighting the enemy, sprinting after a runaway with a dislocated arm flapping behind her, mashing someone with a punch and pulling back a mess of jumbled pistons - oil and steel can disintegrate as painfully as flesh and blood.

If a joint ligament is damaged, you can compensate for it by building up the surrounding muscle instead, and so it is the case with GitS: Arise as well. This set benefits from a wonderful cornucopia of special features and additional extras of such diversity and depth that they're almost worth the cost of purchase on their own. In addition to simple television adverts and fun 'omake' comedy shorts (and seeing a Logikoma get special alloy bolts as gifts to woo his robot princess is actually kind of sweet) there are detailed, in-depth cast interviews that do unpick a lot of the philosophy behind Ghost in the Shell, and like how the Border 1 and 2 release provided a 'special episode' advertising the Microsoft Surface with a highly varied and graphically sophisticated action sequence that was worth it on its own merits, there's another one here promoting, of all things, the .jp web domain! Although the music in the episodes themselves are fairly unremarkable, the opening sequence of the two new Borders, with its glitchy frames, has a lot more atmospheric and suitably moody direction than the bland beige of the first two episodes, and the ending sequences of both episodes are quiet, soothingly-visualised serene electronica of silver bubbles and digital cityscapes that are pleasant to chill to on their own merits (it's a shame we don't have textless closing sequences, these would be nice mood experiences to look at) - and as a curious little fact, Border 3's ending theme is performed by Sean Lennon. The "Making-of" featurette, rather than just being a talking-head of things we've heard in Shirobako, intriguingly makes the creation process an off-beat music video. You might think that promoting the bonus material over the episodes themselves is faint praise, but in as long-lasting a franchise as Ghost in the Shell any anime episode or manga chapter has an impact beyond its running-time or page count and so I value this all as useful and deepening commentary.

Ghost in the Shell: Arise is a qualified recommendation. The promise of characterful insight into how the Major assembled Section 9 is unfulfilled in this second half, and the plotting is less an elegant program and more an ungainly kitbash. However, it is still a bright depiction of an electric world reflected brightly in a host of other features.

6
The cyber-conspiracy at the heart of the show is unconvincing and uninspiring, but the weak plot is made up for by good presentation and a treasure-trove of bonuses.