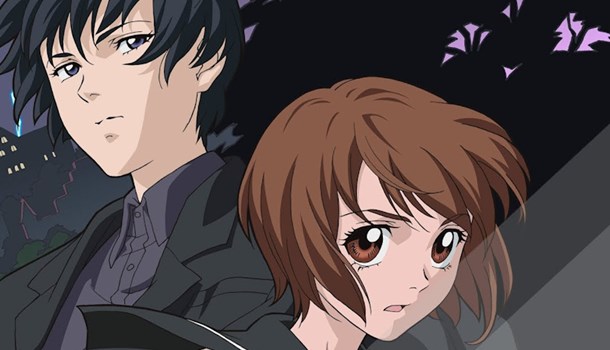 Things that go bump in the night. The recent spate of Japanese horror films have got a lot to answer for: somehow, it seems much more rational to fear monsters under the bed than it does to be kept awake by the thought of a lank haired dead girl falling out of your TV. Although aimed at a younger audience, Ghost Hunt is a spiritual successor to the Ringu cycle of films and their J-Horror legacy. One episode even features a house built atop a haunted well (indian burial grounds are so last season).

In a scene similar to the opening of Ringu, Ghost Hunt begins with Mai Taniyama and two teenage girlfriends huddled together telling ghost stories by torchlight.  Rain beats heavily against the windows of the deserted high school. After the final grisly tale reaches its climax, the girls turn off their torches and begin to count. Urban legend has it that after the count of three a spirit will appear. One, two, three... FOUR! To Mai's annoyance (and her friends' irrepressible relief) the fourth voice doesn't belong to a spirit after all but to Kazuya Shibuya, a handsome sixteen year old boy. Even so, Mai should be careful what she wishes for: Kazuya is the unlikely CEO of Shibuya Psychic Research. Mai soon finds herself under his somewhat less-than-gainful employ and a regular participant in his paranormal investigations. Believing Kazuya as a respected CEO of a legitimate company requires a similar feat of suspended disbelief as watching Death Note's teenage prodigies. That said, if you can grin and bear it until your logic synapses have stopped flaring you'll soon be swept up in his clients' cases.

Kazuya and Mai are later joined by a Scooby-gang of assorted paranormal 'experts' including a sultry shrine maiden, a Koyasan monk and part time rock star (yes, you read that right!), a Catholic priest and a celebrity TV spiritualist. This is what Haruhi Suzumiya's SOS Brigade might look like in a parallel universe. An appealing  cast is often the key to success for a monster of the week series like Ghost Hunt (how many of you watched Buffy exclusively for the vampire slaying?). When done right, they offer a familiar thread through otherwise unrelated people, places and events. Unfortunately, with the exception of Mai and Kazuya, the cast remain scantily developed throughout, their back stories obscured by one fruitless exorcism after another.

The investigations themselves vary in both length and effectiveness. In the more successful story arcs you will be anxiously awaiting Kazuya's always impeccably timed revelations, but more often you will have guessed the culprit with half a whodunnit still left to unravel.

Despite this predictability, there is still enjoyment to be had with Ghost Hunt. Although the series tries hard to appear like a full-blooded horror series - from the creeping piano and ghostly soprano of the opening theme (yes sir, there's no J-Pop here), through to the muddy, sepia tinted, flashbacks - there is another side to the series. Running alongside each investigation is a very human story; a bullied school girl in 'The After School Hexer'; a teenage lover saddled with the weight of her first romance gone awry in 'Ghost Story of the Park?'.  Furthermore, although she might find it hard to admit, Mai appears to be much more taken by Kazuya, the handsome man of mystery, than she is the ghosts that surround him (blame it on her teenage hormones). Towards the end of these first thirteen episodes this simmering romantic sub-plot is welcomely spiced up suggesting that it may be further developed as the series progresses. Add the character development that is currently missing and the series will hopefully rise above the shortcomings evidenced here.

6
Ghost Hunt is unlikely to leave you cowering under your bed sheets, but, more importantly, it shouldn't leave you snoring inanely either.
LATEST REVIEWS