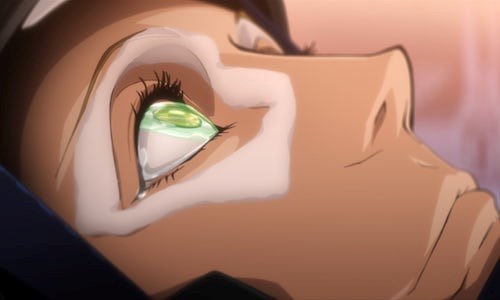 Genocidal Organ is a pretty lucky film. Based on the debut novel by late science-fiction writer Satoshi “Project” Itoh, it is the last instalment in a movie trilogy of unrelated works, and could have easily bitten the dust. Originally scheduled for release in 2015, alongside other parts Harmony and Empire of Corpses, studio Manglobe’s bankruptcy and subsequent closure led to production being shelved until staff could reconvene under the newly created ‘Gene Studio’. The film was finally released in Japan earlier in 2017, with the international release following shortly afterward. Given that Genocidal Organ was once touted as “the number one domestic SF novel of the decade” by Japanese sci-fi magazine SF Ga Yomitai, could such a troubled film adaptation really live up to the source material?

It is the year 2022, a few years after Sarajevo was destroyed by a homemade nuclear weapon. This turned the world in a surveillance state, where soldiers have been augmented to remove emotional responses whilst carrying out their duties. Third world countries are being plunged into chaos, as mass murders take place across the globe with only one man connecting them: An American named John Paul. The US Government has tasked Captain Clavis Shepherd with bringing John Paul down, and his best lead is a woman in Prague. However Lucie isn’t just suspected of having an affair with the target – she’s also key to a much deeper conspiracy behind John Paul’s schemes.

Born into a post-9/11 world, Genocidal Organ is another dystopian future cut from the same mould as the likes of Psycho-Pass. But where Psycho-Pass debates free-will and a “Big Brother” society against a slick neon future, Genocidal Organ is a much grittier interpretation that doesn’t look or feel too far from the world we’re living in now. The idea of mass surveillance through implants and tagging sometimes seems like it's just a stone’s throw away. But despite the technology Genocidal Organ has to boast, the ideas it explores are in fact some of the oldest in history – language and the power words can hold. The story details that John Paul is using words to trigger people into causing mass genocide, but beyond this there’s also the bigger questions of how anyone could be capable of such abhorrent acts - as well as how blind people become to them.  One of the key themes that’s repeatedly brought up is the Sapir-Whorf hypothesis, which suggests that how language is structured influences thought. Numerous scenes consist of two or more characters simply sitting and debating these ideas, they could have been presented in a way that appealed to a wider audience, but if you’re able to keep up (repeated viewings do feel necessary to fully grasp everything) then you’re certainly left with a more cynical view of the world and where we may be headed.

The film isn’t just unrelentingly bleak in its philosophy, it manages to rack up a notable body count through numerous displays of graphical violence. Explosive headshots almost feel like a trademark, not to be outdone by all the other death and gore painting the scenery a rather distinct shade of red. Not only is it sometimes difficult to stomach, but the shift between the film’s diatribe and physical warfare is whiplash inducing. One second the characters are waxing lyrical about their philosophical values, the next Clavis is finding his comrades’ bodies strewn across a crash site.

Genocidal Organ borrows a lot from film noir in terms of setting out its characters and using its archetypes succinctly, but it never really offering a whole lot outside of that. Clavis is the hardened detective (or in this case, soldier/spy), John Paul the villain always one step ahead and Lucie the femme fetale who’s allegiances are questionable at best. Out of these leads it’s only really John Paul that truly stands out, providing a perfect counterpoint to Clavis’ naïve soldier. But where Clavis’ flaw is simply that he’s a cookie-cutter protagonist, Lucie’s is how painfully underdeveloped she is. As the story progresses the audience is expected to believe that Clavis cares more for her than simply a tool to get closer to John Paul, but there’s not enough material here to make it feel natural. Her eventual fate is a huge turning point for the film’s conclusion, but this just further emphasises her as springboard for the other characters rather than being well-developed in her own right.

Given the delays and studio changeovers the film had to endure the animation quality could have been a legitimate concern, but the end result is more than passable. While not the most visually stunning film around, the animation and character design are consistent, while the murky colour palette perfectly matches the narrative’s bleak overtones. Where it does excel however are the backgrounds, with its version of Prague presenting an especially close approximation of the real thing.

Considering how real the film often feels, it’s somewhat ironic that the one thing which completely pulls you out of the immersion is some pretty egregious product placement. Genocidal Organ gets along perfectly fine for the bulk of its runtime, painting a believably bleak future, but for some reason during its climax decides to have its characters turn into advertisers. John Paul’s engaging speech about the justification of his actions is undercut by sloppily mentioning both Amazon and Starbucks, while Clavis’ best friend Williams for some reason feels the need to specifically mention how he only ever eats half a Big Mac. Now this could just be a case of the film doing a quick bit of product placement in exchange for extra cash, but it comes at such a pivotal point in the story that it feels overwhelmingly forced. It may just be two throwaway lines in a bigger picture, but the fact these two lines stick is a bit problematic.

While on the surface Genocidal Organ may seem like your run of the mill spy caper, behind that façade lies a deeply analytical piece that invites it’s audience to not only question the themes and morals of the film itself, but also what’s going on around them. Whether it needs to be quite so unrelentingly brutal to achieve this is questionable, but nevertheless it’s a clever piece of fiction that offers plenty of food for thought.

7
A cerebral slice of espionage action that leaves you with plenty to think about.