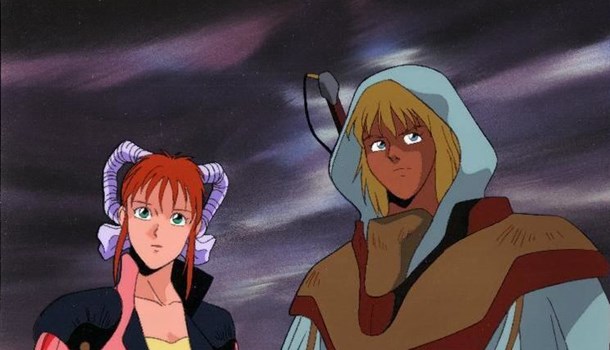 Futuristic post-apocalyptic anime. Again. I actually liked this - it's blatantly Star Wars, but it's still rather good. Apparantly this is based on a computer game - it certainly has the feel of a conversion about it, but having never seen or heard of the game, I can't substantiate that bit of info. It's all about Ital, a young warrior who's been trained by an ageing War-Roid named Randis, a remnant of a technological age long since past, and prime contender for spot the stiff.

During an unexpected battle, Randis snuffs it, and Ital sets out from his ruined home to find revenge. Along the way he meets a cute treasure hunting gal who, at first, thinks he's nothing but trouble, but soon warms to him, and the pair are soon looking like a couple. I especially like the way the anime had the good grace to provide a resolution to the romantic affairs, something that many others just fail to do completely, much to my annoyance...

Anyway, it's a good example of the genre with plenty of charm, violence, humour and some nice character designs to boot. Plus the nice romantic touches, which I'm always drawn to being something of a romantic myself. Couple of extra points for it there then...

It's been re-released as a dub by MVM, and all three parts are on one tape - since I have the original I won't buy it, and hence I can't comment on the dub, but it's great value and a deserved re-release.
7
Solid fantasy action.