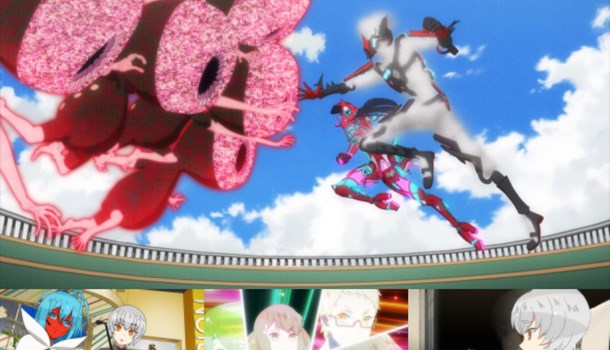 I have to confess that I was a little bit worried after the opening episode of Gatchaman Crowds Insight proper - after building up my levels of excitement with its "episode 0" teaser which gave us a first glimpse at its story, the first full-blown episode felt a little clumsy and heavy-handed in introducing the newest member of the Gatchaman team, Tsubasa.

To say that my worries were quickly assuaged from that point forth would be an understatement - Gatchaman Crowds Insight as a whole is one of the most intelligent and vital anime you're likely to see this year and beyond, besting even its direct predecessor in terms of the sheer importance of its message.

By the time we hit episode four, we already have a good handle on one of the show's core questions for the viewer to consider - could, and indeed should, humanity be trusted with the ability to "upgrade themselves" and choose their own destiny directly rather than have it chosen for them by politicians and government officials with only limited control for the populace themselves? While Rui is convinced that the time is ripe for mankind to step up to the plate, VAPE and their leader are determined to prove that people are no better than apes when push comes to shove.

The upshot of VAPE's activities is that the future of the previously lauded CROWDS system is thrown into disarray - the appearance of the red CROWDS controlled by VAPE members has shown the dark underbelly of this tool, and as a result the populace are scared and wary of the technology which previously seemed to offer them so much. This debate couldn't come at a worse time for the country's Prime Minister, as his vocal support for CROWDS threatens his position with an election in the offing. Eventually the election becomes a free-for-all where anyone can throw their hat into the ring for a vote decided entirely digitally - a brave new world that proves pivotal in shaping the progression of the series.

In short, the election brings about a new leadership where every decision is made via smartphone votes carried out by the public - a true golden age of democracy, where the majority always wins and the populace have a direct line into the Prime Minister to ensure that their elected representative hears their voice. But are the populace really well-equipped to decide on every single aspect of a country's future? Everything seems fantastic at first, but cracks soon start to show as the self-serving desires of the individuals run roughshod over what would perhaps be more beneficial or sensible policies when viewed from a broader perspective.

This brings us to the core of the show as it moves towards its finale - the expectation that this panacea of democracy will unite humanity under a single banner. The trouble is, trying to persuade the entire broad spectrum of a nation to sit beneath one flag is at best folly, and at worst dangerous, and thus things turn sour as those in the majority turn upon their fellows with differing opinions. As things escalate out of control, it's left to the Gatchaman to clean up this mess - but how do you unravel the effective mob rule that has been born from this idealistic experiment gone wrong?

Before this series began, I wondered how Insight would be able to top the first series of Gatchaman Crowds - its story of the wonders and pitfalls of social media was both prescient and considered, and with a few minor exceptions was a comprehensive think piece on the subject that clearly communicated its ideas and points to consider wonderfully. Frankly, given its success I'm astonished to find myself writing that Gatchaman Crowds Insight is better - it takes on even bigger, more important subject matter, yet still makes it both compelling and thought-provoking in equal fashion.

There's so much to unpack about the show's subject matter than it needs a full-blown editorial rather than a review (now there's an idea..), but suffice it to say that this is a show that you absolutely should watch and fully consider as a work that takes in the role of politics, democracy and the media and how the relationships between them - and between all of us - shapes the socio-political landscape. At times this makes for a rather dark series, holding up a mirror as it does to the foibles for which we can all be held responsible for, and its story is told with an occasionally brave confidence as, for example, it discusses Japan's involvement in World War II in a manner which I've never seen directly addressed in this way within anime before.

The downside to the amount of things that Insight wants to cover and discuss is that it somewhat sidelines the Gatchaman crew themselves - Hajime in particular is notable by her absence as she spends much of the series simply as an observer, and aside from Tsubasa the rest of the gang only really kick into high gear on a couple of occasions. To be clear, this is actually a key part of the plot of the series - this group were assembled to protect Earth and do the bidding of the people to that end, so how should they respond when the demands of the public and their own thoughts and ethics fall into conflict? - but if you're looking for lots of high stakes action then you'll only find it serving to sandwich the meat of the show's content.

When those action scenes do take place however, they look great - a good example of CG done well for the most part to depict the Gatchaman team's transformed forms swoop and dart around in battle. The show as a whole also looks the part - its aesthetic is an untidy one that somehow fits it like a glove and gives a unique look to a unique series, and just like the first season this series does an amazing job of bringing its nebulous concepts to life in physical form when push comes to shove. Between its visuals and some fantastic performances across the show's cast, it's impossible not to be caught up in a story that is impactful at times and hugely emotional at others, which further feeds into its ability to deliver its ideas and messages with aplomb.

I really can't stress enough how much you should make the time to sit down and watch Gatchaman Crowds Insight - it's a delightful and occasionally depressing fountain of ideas, all of which it espouses without ever feeling like it's talking down to you or trying to persuade you to take its side in whatever debate its depicting. No matter whether you agree or disagree with its take on the state of the world and all of us who reside within it, its ultimate message is an important one, and it's ably backed up by a story which accentuates the impact of its points of discussion markedly.

You won't find a more thought-provoking anime than Gatchaman Crowds Insight this year, that much is certain, and by the end of it you might not look at the world and people around you in quite the same way ever again.

You can currently watch Gatchaman Crowds Insight in streaming form on Crunchyroll.

9
Insight builds upon the foundations of Gatchaman Crowds to create the year's most vital and important new anime that should absolutely be watched by anyone with a thirst for thought-provoking, intelligent content.
LATEST REVIEWS