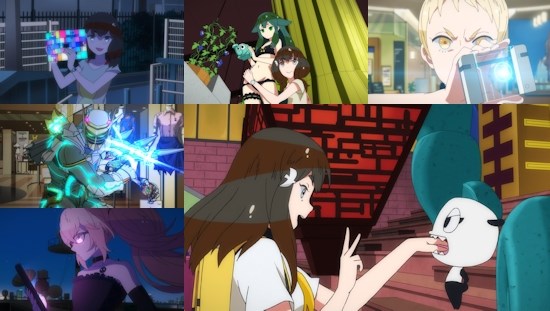 The Gatchaman franchise has been a much-loved one since the early 1970s, even here in the west where it was better known as Battle of the Planets. Given the nature of the franchise, who would dare to reboot and dramatically retool the series to give it a 21st century facelift? Toshiya Ono, previously script-writer on Tsuritama, and director Kenji Nakamura (last seen working on C: Control) it appears, in this all-new take on the Gatchaman name courtesy of Tatsunoko Production.

Our protagonist here is Hajime Ichinose, a teenage girl who is, well... rather unique in her outlook on life. With an over-bearing love of planners and notebooks, and a constantly excited and positive personality, she's hardly the kind of serious and hard-nosed type you'd normally expect to see chosen as a superhero. However, for whatever reason the mysterious being that oversees the Gatchaman project has chosen Hajime as their newest recruit, turning her soul into the NOTE which becomes the source of her new powers before allowing her to be introduced to her new partners in protecting the Earth.

Needless to say, Hajime is something of a square peg in a round hole, even amongst a group of Gatchaman (Gatchamen? Gatchapeople?) who could hardly be called conformists in their personalities and appearances. While her comrades are content to work hard eradicating any presence of an alien life form known only as MESS from the Earth given their proclivity to swallow up all and sundry for reasons unknown, Hajime has no interest in destroying these aliens. Why would she anyway, when they're so pretty and colourful and fun to play with?

Hajime's outlook on life effectively flips what looks set to be the core tenet of the series on its head early on, in turn also revealing one key theme that keeps cropping up throughout these early episodes. In short, Gatchaman Crowds seems to have something to say about following the herd and its detrimental impact upon freedom of thought and action, repeatedly showing the inflexibility of those relying on old hierarchical systems to be detrimental to everyone and anything around them while a free spirit such as Hajime can simply stumble upon the truth by daring to think differently.

It's an interesting topic depicted in a slightly overblown way, but it's also a train of thought that leads into the real heart of the show's story - a plot revolving around a huge social network named GALAX that allows users to form communities, interact with one another and (most importantly) receive requests for help from other members in their vicinity. During these early episodes we see GALAX used as an incredible force for good - for example, incidents which cause injuries are reported by users, which then identifies nurses and doctors in the area who also use the service and contacts them requesting assistance - and an almost utopian ideal of fixing the world's troubles using the power of crowd-sourcing and a global community takes hold, again playing off against the inflexibility of an older generation who still refuse to trust the Internet. However, with millions in thrall of the power of GALAX, perhaps it could be used for evil as well as good, particularly if you believe that humanity also holds no shortage of darkness in its heart...

No matter what else you have to say about Gatchaman Crowds, it's certainly built up some fascinating ideas to explore - ideas that occasionally delve into the heart of Japanese culture, but which also have a worldwide resonance as it effectively begs a question as to who holds the power in this new, massively connected, world. Where the series falters somewhat is in its execution - in terms of actual story-telling, the series is solid if sometimes heavy-handed about getting its point across, but the biggest barrier to enjoyment the series erects is its characters. All of the main players in the series are so overblown in their personalities or the tropes that pass for one that it can occasionally make Crowds teeth-grindingly irritating to watch - Hajime in particular is an acquired taste at best, and while her outgoing (to put it politely) personality provides some decent laughs the relentlessness of her behaviour alone can almost be enough to have you reaching for the pause button. None of the other major characters quite reach these levels but all of them, good or bad, ham up their performances and actions to the point where the entire series occasionally threatens to devolve into pantomime.

Visually, the series is difficult to pin down - it doesn't necessarily look bad per se, but at times it doesn't look great either. The series seems to grow more comfortable with its aesthetic as it progresses and even provides some really satisfying moments, but it won't win any awards for its looks we'd wager. The same cannot be said for the show's soundtrack, which deserves to have praise aplenty heaped upon it for its eclectic blend of dance and dubstep with guitars and orchestral segments - it's classic Taku Iwasaki, and it really powers the show onwards during its more upbeat moments in particular.

Despite keeping some of its roots intact, this is certainly Gatchaman as you've never seen it before - thankfully such wholesale change doesn't appear to be such a bad thing in this case, as the series has no shortage of things to say and is taking the show in a genuinely interesting direction as a result of it. Provided you can cope with its hyperactive and overbearing cast, Gatchaman Crowds could turn into one of the season's bigger successes if it carries on in this vein.

You can currently watch Gatchaman Crowds in streaming form on Crunchyroll.

7
This is a series that has a lot to say and plenty for you to think about - just be prepared to do so while fending off the urge to rip your TV off the wall to do away with its largely irritating cast.
LATEST REVIEWS