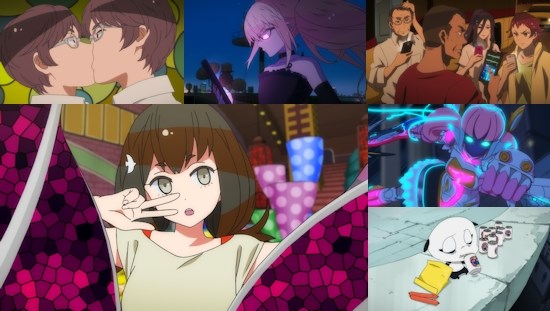 Having enjoyed some impressive success with their outright debut release in Halo: Nightfall, it's now the turn of fans to put new distributor Animatsu Entertainment under scrutiny for their first anime release - and it's a potential doozy too, in the form of 2013's reboot of the Gatchaman franchise from Tatsunoko Production in the form of Gatchaman Crowds.

It might borrow the Gatchaman name, but we should be quick to point out that there's no requirement to know anything about prior iterations of the franchise at all; you can - and arguably should - treat this series as if Gatchaman never existed before this point. With that in mind we begin our journey by joining Hajime Ichinose, a decidedly quirky young girl with an equally odd and all-encompassing love of planners and diaries. As it happens, Hajime is in luck, as she's about to be given a very special planner, proffered by a strange being who has selected her to be one of the mysterious Gatchaman; a group much talked about as an urban myth, but the truth of whom is even more unbelievable.

Difficult though it may be in practice, the theory of the task dealt to the Gatchaman is simple enough - eliminate the alien criminals known as MESS, who are kidnapping innocent humans as part of their unknown goal. It's here that Hajime begins to come into her own as a character - rather than blindly accepting this task, she questions it from the very start. Why destroy the MESS - is that the only way to defeat them? Can't they just make friends with their alien foes instead; perhaps they're just misunderstood? In no time at all, Hajime has turned this entire scenario on its head in spite of resistance from her fellow teammates, and this sets the scene for one of the core themes which runs throughout the series.

While all of this is going on, however, an even more malicious plan is playing out, masked beneath the slick UI of a social media app known as GALAX. This social network is designed to be a tool for individuals and groups to help those around them - let GALAX know that someone is hurt and it'll send a message to qualified medical professionals in the area to ask for their assistance; tell GALAX you're having some legal troubles and the solicitor sat in the same coffee shop will be given the opportunity to drop by and give you some advice. It's a beautiful vision of the globally connected, collaborative ideal - but when not everybody is interested in using such tools for the greater good can GALAX also pose as much a threat as it does a benefit? This question is brought to the fore by Berg-Katze, an incredibly powerful supernatural troublemaker that has its hooks into the creator of GALAX and has no qualms about using it to create as much mischief as possible...

From memory, I can't think of many other recent anime series that have had quite so much to say about modern society as Gatchaman Crowds, and it's by far the most compelling aspect of the show for me personally. Hajime starts out as an incredibly annoying character with her over-the-top behaviour are almost overbearing kookiness, but this actually plays into one of the major themes of the series - the need to be willing to think differently and push back against long-held assumptions or processes if you believe that there's a better way to do things. Is it an idealistic message? Absolutely, but that doesn't mean that it's not worthy of consideration, and its given weight by the circumstances in which it's deployed throughout the series.

Perhaps even more fascinating is the discussion revolving around Gatchaman Crowds' fictional GALAX social network, which ponders the generation gap between new and old (with young characters inherently trusting GALAX to always steer them in the right direction, while older characters have nothing but distrust and misgivings about the technology), while also looking at both the benefits and dangers inherent to our always connected world where it's easier than ever to ask for help from a complete stranger, but also easier than ever to bully and threaten someone you don't even know simply because they don't agree with your point of view. Its razor sharp social commentary on this topic in particular heavy-handed at times and too simplistic at others, but it's nonetheless incredibly prescient one given events of the last twelve months, with death threats raining down on anyone seen as "fair game" for their stance on certain issues, or even simply because of their gender.

Thankfully, Gatchaman Crowds is also as entertaining as it can be thought-provoking - provided you can get past Hajime as an incredibly annoying barrier to entry over the opening episodes, she actually becomes a fun part of a well-rounded cast over the course of the series as a whole, and the show is mostly well-paced and smartly delivered so as to remain engaging from beginning to end. This does bring us to the one major thorn in the side of this UK release of the series however, that being the absence of the "Director's Cut" of the final episode. In fact, to call it a "Director's Cut" is a little misleading, as this finale is better thought of as the true ending of the series - taking important moments that were barely touched upon and not at all made clear initially, and expanding them out to fill an episode which ties up all of the loose ends and explains its conclusion fully. Without this instalment, the ending to the series is just about satisfactory, but it clearly feels like the end to a show that simply ran out of time to wrap things up properly, and you're missing a lot of context for some of its closing scenes as a result. That this finale isn't available outside of Japan legally is a huge issue, quite frankly, and it's hugely disappointing even if it doesn't detract entirely from what is still a great series even without its presence.

Beyond that omission, we have no qualms with Animatsu Entertainment's delivery of this release - video quality is pretty decent on our DVD review copy (and the show isn't a tour de force of strong animation particularly, so it's plenty good enough even if the Blu-ray will doubtless look better), subtitles are correct and working, and chapter markers are all present and correct. The show's English dub is also pretty decent - Hajime's character is more restrained in the English localisation which may actually make it preferable for some, while the rest of the cast do a solid job in their roles, so again we have no complaints here. All in all then, this is a decidedly solid debut anime release from Animatsu Entertainment which bodes well for the new distributor.

Beyond its basic release quality in fact, Gatchaman Crowds is a great start for a new distributor - a unique, fascinating and engaging series that takes some interesting concepts and runs with them in a fashion that really should be applauded. Admittedly, Gatchaman die-hards will be more than frustrated that the series is nothing like the Gatchaman that they love and remember, and you could certainly argue that it shouldn't really bear the Gatchaman name at all, but that shouldn't detract from the fact that this series boasts a superb story in its own right that is well worth your time.

If only it also had the Director's Cut additional episode included, we'd really be singing the praises of Gatchaman Crowds' UK release from the rooftops, but without it the show does lose some incredibly important parts of its conclusion, which slightly waters down an excellent series and makes it "merely" great. If you can get by with the knowledge that you're missing the nuance of its finale and can cope with an initially irritating protagonist, then Gatchaman Crowds is probably one of the most fascinating and relatable shows you'll watch this year.

8
A missing final episode robs its conclusion of weight and clarity, but even without it Gatchaman Crowds is one of the most thoughtful and relevant series we've seen in some time.
LATEST REVIEWS