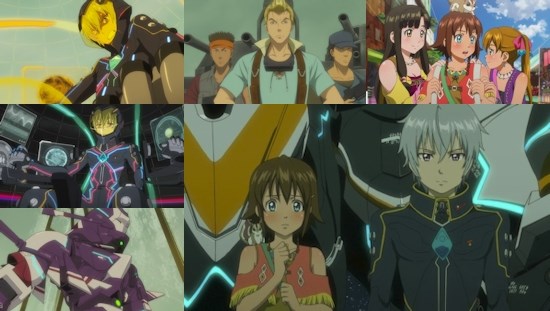 If anime is anything to go by, then it's an inevitable landmark in human history that their exploration of and expansion into space will see them coming up against a malicious and violent alien race than wants nothing more than to see them expunged from the face of the universe. More likely than not, this alien race will also be unrecognisable from what we imagine life to be - in fact, chances are they'll be so different to the point of being regarded ugly that we'll end up referring to them as the "Hideauze" or something.

It's exactly this scenario which greets us as Gargantia on the Verdurous Planet begins - our protagonist, Ledo, is a relative rookie mech pilot fighting for mankind in a long, protracted war against the evil and rather terrifying looking Hideauze, who seem intent on wiping out humanity without rhyme or reason. Such is the state of the human war effort that mankind has effectively been turned into a massive war machine - if you aren't fit to fight, then you're of no use to society, and working for the good of the war effort is unquestioningly accepted as a duty and an honour by all involved.

In these terms, Ledo is a model soldier - even the prospect of gaining some leave to enjoy some well-earned downtime fills him with disinterest, as all he wants to do is to serve his kind by fighting relentlessly against the Hideauze. However, when a major offensive against the Hideauze goes horribly wrong, Ledo finds himself stranded as he and his craft plummet through space onto an unknown planet.

Awoken from stasis once the situation requires it, Ledo finds himself surrounded by what he requires as a primitive outpost of mankind - these people are undoubtedly humans, but they speak a different language to Ledo and make do with basic equipment rather than the state-of-the-art kit available to Ledo. Assuming the worst of these supposed "savages", Ledo looks to make good his escape, only to discover that he's stranded so far from his fleet that there is no immediate chance of either fleeing or being rescued.

Given that it's clear that the people of the massive floating fleet known as Gargantia aren't actually as barbaric or savage as Ledo imagines, there's nothing for it than to make this fleet his new home, and much of the first half of the series follows Ledo as he tries to adjust to his new surroundings - a world and culture light years away from his own, where people work together and help one another out of their own compassion rather than due to any forced doctrine, and where the weak are given equal importance to the strong. Between misunderstandings and major cultural clashes, Ledo's relationship with the people of Gargantia slowly but surely becomes one of understanding and mutual appreciation, but the re-appearance of what seem to be old friends and foes soon threaten to bring not only the honeymoon between Ledo and his new allies to an end, but potentially to split Gargantia's populace in two entirely.

As I've already alluded to, Gargantia on the Verdurous Planet is something of a series of two halves - the first half is really all about dumping Ledo on this strange planet and examining his culture shock as he tries to integrate into a society so different from his own, leaving him floundering to try and understand what it means to be a useful member of this society and how its values correlate with those he are used to. This actually proves to provide some genuinely interesting story-telling as we watch Ledo learn the language and how to communicate with those around him (helped immensely by the wonderful Chamber, the AI pilot support mechanism at the heart of his mech), and perhaps more importantly how to compromise where his beliefs or actions clash with those around him.

Once we enter the second half of the series however, the focus of the show begins to shift as ties are discovered between the Hideauze and the fauna on Ledo's new temporary home, while the power inherent within Ledo's mech also threatens to imbalance both Gargantia and the wider world. Although there are still some interesting concepts to be explored within this narrative shift, is simply isn't as satisfying to watch - some elements of the show are incredibly heavy-handed in their execution throughout this second half (laughably so in a couple of places) and the ultimate discussion points of these later episodes suffer as a result. It is perhaps laudable that the series chooses to widen its focus beyond simply Ledo's place on Gargantia, but we can't escape the fact that his learning to integrate with such an alien community sold itself incredibly well in its early episodes, which in turn left this change in pace and tone to feel jarring and even unnecessary.

Visually, the series also makes some mis-steps (or simply runs out of time to animated things properly more likely), but these moments are thankfully few and far between and the overall aesthetic of the show is a good one - Gargantia itself and its wider world is a wonderful spectacle to behold, and the entire cast has no shortage of eye-catching character designs even if they do occasionally find themselves leveraged in the name of fan service above all else. As a whole, the show looks fantastic and provides some stunning action scenes in its closing episodes to leave an overwhelmingly positive impression.

Taken as a whole, it's hard to be too harsh on Gargantia on the Verdurous Planet - it offers up a fascinating original concept that manages to largely position itself away from the clichés of many other mecha or sci-fi anime, and it does a top-notch job of world-building and (in Ledo's case at least) character building to make for a satisfying viewing experience week-on-week. It's these strengths that make the stumbles throughout the second half of the show all the more frustrating as it veers into fresh territory that simply doesn't work well enough more often than not despite its best intentions.

The difficult question that this shift poses is just how much the changing focus of the show's narrative effects the series as a whole - personally, I feel like Gargantia on the Verdurous Planet is still a show worth watching, and there are good moments to be found even in those latter episodes, but it falls some way short of being the classic that it might have been with better execution and story-telling. If you're willing to accept it for all of its imperfections though, Gargantia is a decent enough shot at creating a compelling original anime series that has its heart in the right place and explores some memorable ideas before losing its way.

You can currently watch Gargantia on the Verdurous Planet in streaming form via Crunchyroll.

7
Gargantia falls off quite badly in places after an impressive first half, but it still has a sufficiently interesting premise to be worth watching.
LATEST REVIEWS