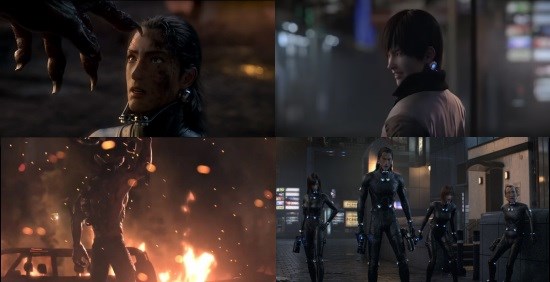 Hiroya Oku’s Gantz has had a rocky road when it comes to adaptations. Gonzo’s 2004 adaptation was rather inconsistent in quality and had a pretty dire original final arc, and the Japanese live action adaptation was utterly bizarre. Now Digital Frontier’s CG adaptation, Gantz: O has hit the UK courtesy of Netflix. Can they score 100 points on their third try?

Masaru Kato is an ordinary teenager going through high school, but sadly for him his heart of gold is about to get him killed as his attempts to save an injured man result in his being stabbed to death by an attacker with a knife. Death however, proves only to be a temporary state as Kato revives in an empty apartment with only a few strange men and women and a large black sphere for company. For those who’ve never encountered Gantz before this means he’s been chosen for a deadly hunting game where he and those around him are tasked with killing off a variety of aliens who want nothing more than to tear them to shreds in as violent a manner as possible. Before Kato can do more than beat the world record for shortest time needed to change into a skin-tight outfit, he finds himself and his new teammates transported to Osaka, where they must deal with not only a deadly group of aliens but also a competing team of Gantz players.

For those who know their Gantz this is no doubt both familiar and perplexing, given that the Osaka arc is both one of the series best for action but also comes slap bang in the middle of the source material (the arc starts at about volume 21 of the manga!) The idea of adapting something completely new for O rather than making people sit through the first arc again is certainly a welcome one for long-standing followers of the series, and it does work here although at the same time it does seem rather awkward as it reduces many of the other characters to one-note extras. Despite each character having pretty extensive backgrounds by this stage in the manga, only Kato gets anything more than a cursory back-story. It also must be said that the film does reinforce the fact that Kato is probably one of the worst and most boring characters in the franchise – the eternal goody two-shoes in a sea of people with dark and twisted motivations. It's like dropping K-ON’s Yui into Flowers of Evil... (Now there's a fan fiction idea -Ed.)

But what they were clearly going for here given the choice of the Osaka arc was to have as much full-on action as humanly possible, and they certainly managed to achieve that. Whilst it might not always make total sense (the final boss has more final forms than a Final Fantasy game) you certainly can’t fault it for doing everything to keep your attention going, from sword fights to gunplay to mech combat it’s all here, and the animation looks pretty great throughout too which makes it great fun to watch even in the film's quieter moments (although I did wonder if the team behind the Dead or Alive games had been involved as the female characters have more jiggle physics than I’ve seen in a long time). The one thing that doesn’t quite work though is how... clean the film is. Gantz is pretty famous for its heavy use of sex, nudity and in particular incredibly over-the-top bloody violence with no qualms about tearing its cast to bits. Whilst there is an element of that here it does feel a bit sanitised, particularly with regard to the human characters. and you suspect there has been a move to aim for a lower rating for the censors here which is a bit disappointing.

What you take away from Gantz: O is going to come down largely based on how much knowledge you come to the film with. Long-time Gantz fans are going to be thrilled to see the arc more-or-less entirely done and done well but are going to mourn the short shrift favourite characters get, whilst newer audiences are going to have a blast but may find themselves confused if they try to follow through by going back to the manga or the live-action/anime adaptations. I do have a soft spot for this franchise though and hopefully this can do well enough that perhaps someone will have another punt at a full-on series now that the manga has concluded. Whilst you won’t be picking up a Netflix account just for this, if you have one you’ll definitely have a good time if you decide to check this out.

You can watch Gantz: O on Netflix UK.

7
Still imperfect - but a fantastic slice of sci-fi action.