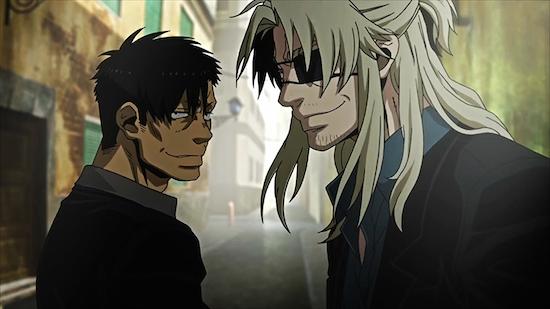 Worick’s a gigolo. Nic’s a superhumanly strong ‘Twilight’ - someone who gains special abilities via the use of the drug Celebrer. Together, they are The Handymen: An ill-fitting duo of busybodies taking on the odd jobs neither the mob or the police are willing to handle. Plying their trade in the mean streets of Ergastulum, the two men find themselves embroiled in what seems to be shaping up to be a classic tale of gangland machinations...

To say Gangsta was something of an ill-fated production would be an understatement, put together by studio Manglobe as what would turn out to be their final television anime before succumbing to bankruptcy. The show wears these production woes on its sleeve, with much of the animation and visuals appearing incredibly cheap-looking and rushed (aside from a brief, spectacular fight-scene in episode five). All this was further compounded by the fact that during its initial run, a recap episode aired before the show’s final three episodes - killing any momentum the show had built up by that point dead. Meanwhile, in the UK, the show was streamed on Viewster, meaning it never tapped into the larger audiences offered by Crunchyroll or Funimation in other territories.

Suffice to say, the odds were firmly against Gangsta from the off, and it’s a shame, because it brings a lot of decent material to the table. For the first few episodes at least, the show keeps itself in order, building its world and characters effectively; setting out a stylish, distinctly adult feel that makes for a refreshing change from anime’s predilection for endless high-school hijinks. In a city rife with violence, prostitution and drugs, it’s made clear that Gangsta is telling a serious story about serious people, and it’s certainly not shy about showing us the uglier side of said activity. Coupled with an excellent English dub that really captures the mood of the show and peppers its translation of the script with liberal expletives, Gangsta often feels like a nod back toward the kind of 18-rated thrill-rides that curried favour with anime fandom in the early 90s. Throw in an slick soundtrack for good measure, and from a tonal perspective, Gangsta absolutely nails the atmosphere of sleazy urban crime.

But for all that Gangsta plays with a strong opening hand, it isn’t long before it finds itself on a losing streak to nowhere. The character work might be decent - with both Worick and Nic well-established as likeable yet complicated presences within the show - but everything else around them feels impossibly fragile, the barest sketches of a narrative drive lending the show an impossibly aimless feel. Stuff happens, but it never feels like it truly propels the core storyline forward - and complicated by numerous flashbacks, we’re left spinning in a maze-like web of plotlines leading back in on themselves.

Anime’s previous flirtations with the crime genre have delivered us some real classics, not least among them the likes of Baccano, Black Lagoon and Gungrave. And what these three shows all have in common is an impeccable command of pacing - a constant ‘just one more episode…’ itch that compels the viewer on. It is exactly this essence that is sorely lacking in Gangsta, which seems content to present itself more as a vaguely indie-leaning tone-piece, wallowing in its own abject failure to come up with a bit more thrust. Armed with the beauty of hindsight, it’s easy to see Gangsta as a highly literal symbol of Manglobe’s messy disintegration as a studio, crumbling to pieces in real-time, individual glimmers of hope losing themselves amidst a ceaseless grey-brown backdrop. Gangsta tells an ugly story about ugly lives, but that doesn’t mean the show itself had to come out looking and feeling quite this *bad*...