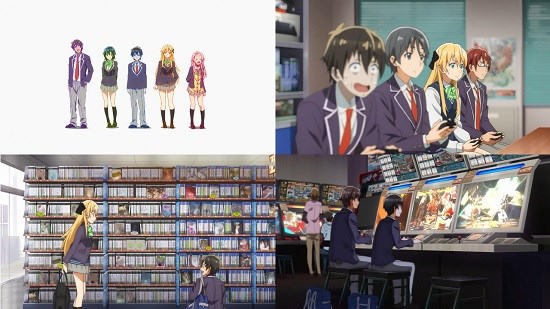 Keita Amano is a fairly typical high school introvert, who loves playing video games. While out shopping for something new to play one afternoon, he runs into the most popular girl in school: Karen Tendo, who confesses that she also loves video games, and attempts to recruit him into the school’s video games club.

The video games club has a few wacky characters already, such as Gakuto - the hardcore FPS gamer, Oiso - the focused fighting game expert, and Eiichi - the other new club member with a comically overblown back-story. Going by the usual high school club anime pattern, one would expect Keita to join up and probably play the straight man to all their antics, but the overly serious way the club members approach gaming clashes with his easy going world view, and leads to him rejecting the membership offer in a very public and easily misunderstood way.

Therefore, the actual main cast of the series largly forgoes the club and consists of not only Keita and Karen, but also local popular kid Tasuku Uehara, Tasuku’s girlfriend Aguri, and Chiaki - another girl from Karen's class. Chiaki similarly refused to join the gaming club, due to their overly competitive nature.

From this point the show becomes one part exploration of gaming as a hobby, and one part goofy romantic comedy. Keita just wants to play games for enjoyment, he has no interest in the heavily competitive mindset that the gaming club embodies. However, Karen is unwilling to give up on getting Keita to join the club, and ends up falling for him in the process. Tasuku befriends Keita and they bond over his rekindled love of games. Meanwhile, a series of misunderstandings lead to various characters falling for one another and getting the wrong idea about each other’s relationships. The original gaming club maintain a background presence but haven’t yet had much to do outside of the first episode.

The show feels like it really understands the way people play games. As an example episode 2 contains a detailed take on the way people who don’t play a lot of fighting games tend to approach them. The difference between Keita’s ‘play for fun’ approach and the game club’s ‘play to win’ attitude also drives discussion about what the characters want out of their hobby - Which treats gaming as something large enough to encompass both, without dismissing either approach as inherently wrong. This is something plenty of people could learn from.

The comedy manages to hit quite consistently, outside of a few gags in the first episode which fall flat. Of additional note is the opening theme to the show, which consists of a fairly generic j-pop song set to a diverse series of gaming references. Amongst the, to be expected, collection of retro Japanese classics and Street Fighter 2 continue screens, I even managed to spot Arma 2. The series creators have apparently struck a deal with Arc System Works, so instead of having to invent a fighting game they can pull in Guilty Gear and Persona 4 Arena footage for added realism.

Overall, Gamers! Is a fairly smartly written show that managed to surprise me several times over the first few episodes, and I look forward to seeing how it turns out.

8
A smartly written and funny show about a people who just love video games.
LATEST REVIEWS