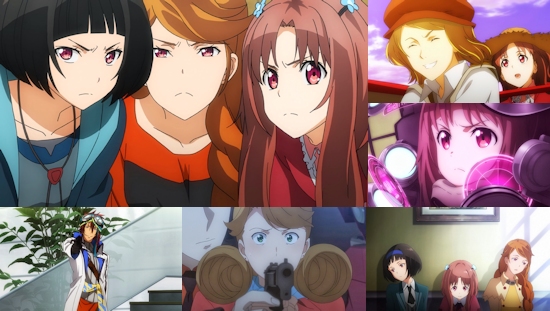 Anime loves to use famous historical figures for its own ends - we've previously opined that there are enough shows making weird and wonderful uses of Oda Nobunaga's name and likeness for him to spin in his grave fast enough to power most of Japan, and series such as Horizon on the Middle of Nowhere and Nobunagun also take great glee in leveraging other noteworthy individuals in decidedly unique ways. This brings us to one of last autumn's two noitaminA shows, which features none other than Galileo Galilei as a focal point. There are no mentions of Queen though, lamentably.

To be precise, the mainstay of Galilei Donna centres around a family made up of the famous astronomer and physicist's descendants - not that you'd believe it from looking at the trio of sisters that makes up part of the Ferrari family and become the stars of the show. While the youngest sister Hozuki is clearly a brilliant inventor and scientist in her own right, her tendency towards creating offensive weapons is rather alarming, while her two elder sisters consist of loud-mouthed wannabe lawyer Hazuki and apathetic Kazuki.

When all three girls find themselves the subject of simultaneous kidnap attempts there's some obvious cause for concern, but the police seem more interested in questioning the girls for their troublesome (and largely violent) responses towards their alleged attackers. Their disinterest in the wider implications of these incidents aren't just lethargy though, as there's a conspiracy at work - a conspiracy which revolves around a massive corporation responsible for generating power in a world in which energy is increasingly sparse.

With the Ferrari sisters and their parents also igniting the interest of sky pirates, we soon get to the crux of why everyone is so fascinated with them - the family are believed to be the holders of Galileo's long lost legacy, the "Galilei Tesoro". With supposedly no knowledge of this mysterious object, the sisters flees their increasingly troublesome pursuers - an adventure that ultimately turns into their very own hunt for the Tesoro as they find themselves labelled as wanted criminals.

The changing nature of this series as it progresses makes Galilei Donna a multi-faceted affair - after an episode introduction the Ferrari sisters it turns into a gallivanting adventure around the world trying to collect the clues to the Galilei Tesoro, before taking a darker turn as other interested parties intervene and even veering into a slightly incongruous time travel story briefly before ending its tale as a courtroom drama of sorts.

If all of this sounds great, we should proceed to the bad news - that Galilei Donna may be a jack of all trades, but it's a master of none. After a great introduction to its world and characters, the series slowly but surely fritters away everything of note that it's built up. The show's world-faring adventure to compile clues to the Galilei McGuffin - sorry, Tesoro - soon becomes tiresome, and what's more it feels bereft of ideas as it shoehorns in plot points including a homeless man whose only purpose is to save one of the sisters after a fall from a great height gives her... a fever.

This kind of clumsy crafting of its plot is really Galilei Donna's most egregious offence - that it lacks the ability to sustain a believable story within the world it's built. This problem extends not only to the show's events but also its characters, the worst example of which is a ridiculously over-bearing villain of the piece who ends one episode by shooting a bunch of people simply because he can. All to depict that he's a bad person, in case you'd missed it from all the times this very fact had already been hammered into you with all of the subtlety of a mallet to the forehead. After enough of these stupid incidents it's hard to sustain any kind of interest in the story, and such moments are a series of body blows from which the story never recovers.

The show is also a mixed bag elsewhere - character designs are uniformly great, proving to be both striking and pleasing to the eye, but the overall animation quality is so variable and tails off so markedly as the series progresses that this too fails to work in its favour. Instead, you suspect that budget or time constraints are very quickly coming into play by the mid-way point of the series, and when picking out moments of horrendously off-model characters is more enjoyable than much of the story in the first place it's ultimately on a hiding to nothing.

If it sounds as though we're being harsh on the series, it's a measure of what it could have been - its opening instalment was thoroughly enjoyable and made great use of its main trio of characters; an effort that was never really seen again throughout its remaining episodes. Similarly, Galilei Donna's story showed promise that was lost between its poor characterisation, bad plot decisions and meandering events to destroy any potential that it once had.

The result is a series that isn't terrible, but is suitably half-baked in its execution to be hugely disappointing. The way it ties in to the life and achievements of Galileo is a neat trick, but one neat trick can't save a series with significant animation and narrative issues.

You can currently watch Galilei Donna in streaming form via Crunchyroll.

4
A series with some nice ideas and interesting characters, utterly ruined by the sloppy execution of everything that it sets out to do.
COMMENT AND DISCUSS
blog comments powered by Disqus