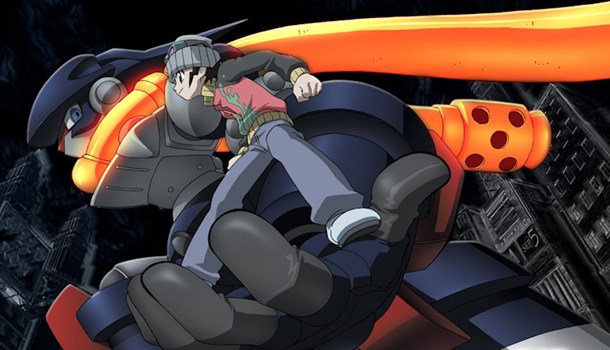 When you live in a town that has its power shut off at midnight, you could imagine how really annoying that would be. Made it to the end level boss on your game, on the last page of whatever your writing on your computer and then the power cuts out making you loss everything. Its got to suck. But some how the characters in Gad Guard seem to be fine with it…weirdos.

Strange way to begin an intro for a review? More than likely, but it gets you thinking. Anyway, what is Gad Guard? Well, Gad Guard follows Hajiki Sanda as he comes in possession of a Techode a big robot born from a square rock called a Gad when a strong spiritual bond is formed. Hajiki soon finds others with their own Techode’s and is now on a mission to meet them all.

Gad Guard at first impressions is a very by-the-numbers big robot anime. Young boy finds big robot, has scrap with “bad” guy, “bad guy wants revenge because he looks like a fool being defeated by young boy. He’s angry. He wants to destroy all the Techode’s especially the boy’s one. But is he all bad? This type of story has been done quite a few times and really Gad Guard isn’t much different in the overall plot.

The first four episodes are really introductions for the main characters as well as a couple of the supporting characters as Techode’s still to be popping up everywhere. The first few episodes do actually carry the story along quite well, introducing everyone at a decent pace as well as setting the mood that the rest of the series will seem to follow. While the main story seems to be by-the-numbers, the characters are interesting to watch and could actually see them developing during the course of the series.

The character design is very much an anime look, not the more realistic kind like Cowboy Bebop, but more of a style like Rave Master. Even the Techode designs look as though the guy who did the MegaMan designs had a hand in it. The soundtrack has quite a Jazz style to it, much like the Cowboy Bebop soundtrack, especially in Gad Guard’s opening track and the actions sequences that pop up.

Gad Guard volume one is an interesting one. The series could swing two ways, either a by-the-numbers big robot anime, or if it takes the time to go into its characters as well as the world around it Gad Guard could prove to be an entertaining anime to watch and prove that all big robot anime don’t have to be Gundam to be recognised. We shall see when the series continues.
7
An interesting start, have to see in later episodes which way the series will go.
LATEST REVIEWS