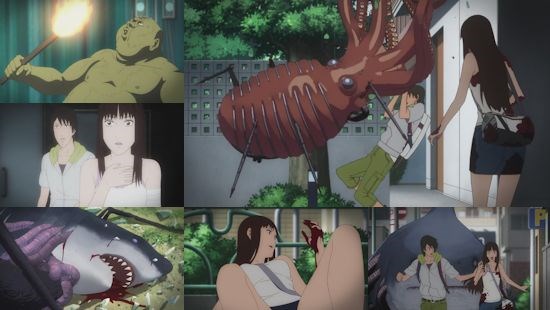 Where do I begin with this review... I'm not sure what I just watched, although I am quite sure that I won't be putting myself through it again.

GYO: Tokyo Fish Attack is one of the most disgusting things I have ever seen. I have to make clear from the start that I've never been a big fan of the sea or sea creatures. I wouldn't say I have a phobia or anything, but something about those weird, deep sea crazy-looking things that just freaks me out a bit. It's those cold, dead eyes that just seem to stare and stare. Not very nice at all.

I just can't even begin to imagine why someone would decide to create anything like this. Was it a case of "Hmmm, I know... fish, for some reason, sprout mechanical legs, come ashore and start killing people"?  Yeah, it's a crazy concept, and it certainly is original there's no denying that, but I'm still having trouble getting my head around the concept. Some of it works really well, while some aspects of it simply don't.

The film starts off innocently enough - three young female Tokyo-ites have gone on a supposedly quiet trip to Okinawa as a sort of graduation holiday. They seem like quite a harmless bunch; there's the cool-headed Kaori who seems to have her life in order and a boyfriend who cares for her back in Tokyo; have Erika, the brash and man-hungry member of the group; and finally we have Aki, the slightly overweight, unconfident clingy one.  A pretty regular bunch for a horror movie, and it won't take a brain-sturgeon to figure out who will end up as fish-fodder here. Sorry...

This trio just so happen to be staying in a rather nice Okinawan holiday home, conveniently close to the beach. As they walk towards the house they encounter a rather foul smell. "Smells like rotten humans" they proclaim. As they open the door to the house it's obvoius that that's where the stench was coming from and they rush to open windows to air it out (it's important to note that the film visually shows the smell as yellowy-brown gas on screen, just to make it that bit more more gross).  They find a small scutting fish, running behind furniture, setting up quite a tense scene - we've all had those moments, seeing a big spider go behind a bookcase, or even worse a rat. It's only human nature to feel wierded out by these things, and GYO does this really well. The fish is promptly squished against a wall and disposed of in the trash.

Apart from a few "what was that" type questions, none of the characters seemed to be that bothered by it at all; they just go to sleep. I tell you, if a walking fish came into my house and started running around, there is no way I would just kill it and go to sleep, no way. No calls to family or friends? No checking online for what you just found? I'd be going through the yellow pages looking for a local scientist, or maybe a fishmonger...

The next day things have sped up a bit and now our young ladies must deal with a walking shark - the film's action scenes are actually done quite well, with animation that looks good while the actual shark itself is horrifying. As the shark rampages through the house attacking the girls and causing havoc, I'm thinking "Am I seriously watching a walking shark jumping through windows?" and let out a little chuckle. Any horror that the film had in it had gone by then as it all becomes rather laughable.

Thankfully, there is an actual storyline in the film, which centres around Kaori heading back to Tokyo in search of her fiance Tadashi after losing touch with him. On her way she meets an enthusiastic young cameraman who finds out that Tadashi may have something to do with the thousands upon thousands of fish invading Tokyo, and the two tag along together in serch of Tadashi in hope of finding something out. On the way we are treated to more walking sharks and even a walking octopus (tentacles had to make an appearance didn't they) - it's around this time we find out that the fish are also spreading a virus that turns humans into... well, I'm not really sure. Rest assured it's still very disgusting and scenes involving the human mutation are not very enjoyable at all, unless you're into that sort of thing.

From this point onwards, the film gets rather carried away with itself, almost feeling as if it doesn't really know which plot thread to follow, before trying to explain why this is all happening at which point the whole endeavour just sort of falls flat on its face. It tries to tie in its characters to the story and it doesn't work, and by this point in the film I was so baffled by what was going on I just wanted it to end, yet it just keeps going and going, relentlessly getting more and more ridiculous, I'm talking mad scientists, circus tents and giant walking piles of overinflated humans. Yes, you did read that last bit right.

In summary, this is something you might want to buy for some kind of shock value, or to gross you and your friends out - maybe you're having a few guys and girls around for a beer and want to surprise everyone, in which case whack GYO in the tray and have a good laugh.  Whatever you do though, do not try and take this film seriously by any means.

Japanese with English subtitles.  Extras include an interview with the author of the original Gyo manga, Junji Ito.

4
A great oppor-tuna-ty to freak you and your mates out, but little more.
LATEST REVIEWS