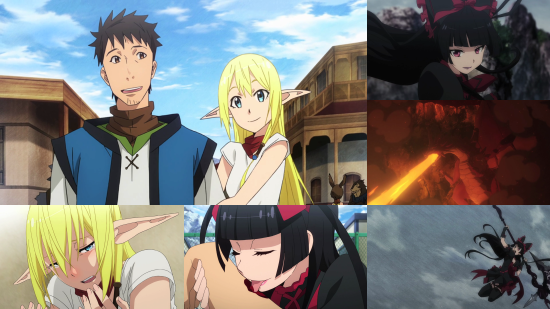 I am all for being proud of your country. Hell, that kind of goes with the territory when you are British and have worked abroad in one of the Overseas Territories. However, that should be tempered with knowing your history and knowing how often those who issue and have been issued orders screw things up. I can understand the sentiment of those who glorify the armed forces, but there are limits to the propaganda.

I have been following GATE for some time now and although the nationalist message was repeated often, thanks to some of the characters and the ongoing story it was easily ignored, and it should be said that the same thing has occurred in the second series. There have been instances where I actually forget that the SDF are a thing, as I have been distracted by the delights of Leilei, Tuka and Rory, but then here it comes: “The SDF are our friends, our heroes"... and our conquerors.

Before I get into this negative spiral, let's first focus on the good. In this second series of GATE, the Empire and Japan try to enter into peace negotiations which fail epically, even after the SDF bomb their Senate building into oblivion with a laser-guided missile and after Princess Pineapple Cocktail’s idiot brother and his evil slave bunny-girl decide to start their own civil war to overthrow the emperor. Thankfully, this is all secondary to the Leilei, Tuka and Rory show, which, lets be honest, is the only reason other than the copious quantities of cat and bunny girls why I still love this series so much. Honestly, if we just had these three and some of Itami’s squad in a normal harem setup, I’d be a lot happier. But I digress.

Series two of GATE gives each of the prospective future wives their own story focus (Princess Pineapple gets likewise, but hers is very different). To quickly summarise, Tuka finally gets over her dad issues, though it does take an expedition to eradicate the Fire Dragon which requires a combination of Leilei’s magic, Rory doing what she does best (which is acting as a lethal loli goth dragon diversion) and Tuka, performing the final act of heroic destruction. The only side effect is that Tuka now calls Itami “Otou-san” all the time, which doesn’t help his elf-fetish or his younger sibling fetish, or in fact his mental health as a whole. I am sure she is just trying to capitalise on the fact that Itami is doing his best not to letch on her constantly, but if she is she is doing it very well.

Leilei quickly turns from being an apprentice mage into, well, a master of the magical arts in no time flat. She travels to become a master, and after the fire dragon incident is made a hero by the new dictator of the Empire and is simultaneously hunted by an assassin. That’s a lot to take in I know, but Leilei quickly turns into the most surprising little hero. I just wish she would crack a smile sometime.

Then, we come to Rory who got roasted by a dragon, so that you can continue living. I think the only way she could actually be more entertaining as she makes continuous suggestive moves on Itami would be if she actually had more screen time. I am quite serious when I say this, but I actually think that Rory has been massively sidelined in this series, which is understandable when her beauty and charisma takes centre stage whenever she is involved, but is unfair for those who want her to stut her gothic stuff more. In fact, lets just give Rory her own series. She could be a travelling priest, going from village to village dispensing her unique form of lusty death justice. I would watch the heck out of that.

But, as much as I want to just sit here and fantasise about Rory Mercury some more, its time to get to the point. Does GATE continue to be good?

Yes, but only up until the SDF got involved. I am serious. As it goes, the inter-empire politics, the treachery, Pina’s turmoil and the screwed up background of the rabbit-chief is infinitely more fun than watching a parachute drop of SDF commandos going full Civilization Modern Era on an unsuspecting Medieval Era armed force. It isn’t fun watching machine guns firing armour piercing rounds straight through a line of well-trained knights. Okay, so those knights represent a force that was subjugating an innocent people but still, this is just posturing and in all in the name of passing on a message. “The SDF kick bottom”. Well, no. Not buying it. If anything, what was actually interesting about the entire “Will the SDF attack?” saga was actually the political posturing back in Japan. The fact it took so long to issue an attack order said more than the attack itself. I just wish it took that long for Tony Blair to invade Iraq.

I think my greatest feeling over GATE now is actually disappointment. I really wanted the series to have less of the nationalist rhetoric, but no. The message was thickly laid out and continued to be fed to the audience right to the end.

On a related note, the timing of a law in Japan to allow the SDF to legally fight on foreign soil proves one thing: that the Nationalists are winning, and maybe the defence force are no longer just for defence. After all, that is what GATE is all about - the defence force invading a country and committing mass murder in order to gain resources and influence.

6
GATE would be better with more Rory.
COMMENT AND DISCUSS
blog comments powered by Disqus