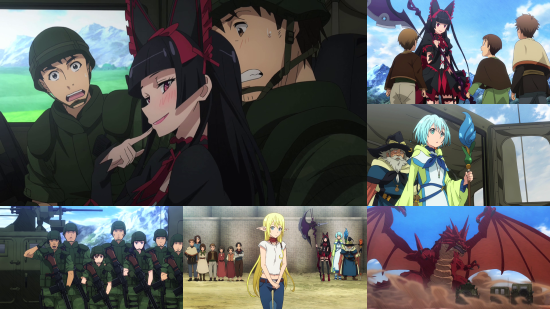 One of the greatest innovations in human history has to be gunpowder. From the moment it was used to push a lead projectile down a barrel towards an animal or a foe, human civilisation was changed forever. Swords and suits of armour were quickly replaced with rifles, cannons had the ability to destroy previously invulnerable fortresses and, being an industrious species, humanity developed new ways to evolve war so this new technology could kill people in more and more imaginative ways. However, if you take today’s weaponry and pit against both the technology of medieval times and magical foes like dragons, orks, ogres, elves, knights and catgirls, what would happen?

GATE answers this question quite satisfactorily in its first few episodes. Long story short, modern weaponry 1; medieval warfare 0. More specifically, there are a heck of a lot of dead dragons killed by the likes of heat seeking surface-to-air missiles and hellfire missiles mounted onto Apache helicopters. I doubt even a high level suit of armour with hundreds of crafting hours would survive long against a 50 calibre automatic weapon.

GATE starts with what becomes known as the “Ginza Incident”. A portal to an alternative world, referred to later as the “Special Region”, appears in the middle of the Ginza district. From its orifice spews an army that discharges straight into the helpless shoppers, disrupting a summer comic convention and resulting in hundreds of deaths before a hastily mobilised Self Defence Force (SDF) and the police are able to put a stop to their rampage in the centre of Tokyo, thanks to the quick thinking of an off-duty Yoji Itami, a soldier who just happened to be in town so that he could purchase his 2D waifu merchandise.

As the situation comes under control, the politicians and the UN decide to task the SDF with an exploratory excursion into the gate to identify further threats and to secure the other side of the portal for future exploration. A battalion is sent complete with tanks, artillery and heavy support. The waiting army on the other side doesn’t stand a chance. Once secured, the SDF, complete with a newly promoted Lieutenant Itami, sends out its exploratory squads to secure the surrounding areas and make first contact with the peoples of the Special Region.

Now as you might expect, having Humvees driving through the main road in your village when you normally expect horses and carts is quite a sight. The SDF are greeted first with scorn and suspicion, but as they prove their trustworthiness through good deeds (such as assisting with an evacuation following the assault of a large winged fire-breathing lizard), they become heroes to the people and it is during these evacuations that Itami and his squad pick up three "interesting" girls. By interesting, we mean they are the kind of girls who you would normally expect to fall in love with and cling onto the main male protagonist in a harem anime, but time will tell whether this actually happens.

So, the lovely lasses! Firstly, and most notably is the deadly Rory Mercury. An apostle from the temple of a dark god, she is an assassin by trade specialising in eradicating thieves and murderers using the power of her dark gothic lolita outfit and a battle axe that has to be twice her body weight. How she can wield such a weapon, only anime physics can answer. Rory is the source of many a perverted screenshot by the fourth episode due to her quite amusing dialogue. The second girl is a highly intelligent apprentice mage, capable with languages which is a good thing considering the language barrier. Our final candidate is a homeless blonde wood elf who was rescued from the bottom of a well after the dragon barbecued her village. Not a bad selection I must say. Sadly, though, no catgirls yet.

However, inside this Special Region, and back at home on Earth, forces are conspiring against the brave SDF and their valiant efforts inside the Special Region...

This is where I have to be serious for a moment. It’s not often I get to actually watch something which I think could be considered propaganda. I am not new to the whole propaganda thing - living in a part of the world where there is an ongoing UN diplomatic argument does add some complications to life. GATE, in my opinion, feels like it is trying to promote the Self Defence Force as so far, they have been highlighted as nothing but heroes and brave rescuers, with indigenous governments and overseas governments being depicted as hostile, “evil”, manipulative and greedy. It will be interesting to see where the anime actually goes with this, as the SDF change their tactic from being a purely defensive force, as mandated by Article 9 of the Japanese Constitution, to being a conquering and colonising force, capturing territory and resources for the benefit of Japan. I do wonder if this is one of Mr Abe’s little games to try and get a younger generation on the side of nationalism once again, but perhaps I am just being overly cynical...

Back to the series itself, GATE is based on a manga and a series of light novels, of which only the manga seems to have been licensed for the English speaking world (by Sekai Project, interestingly). The show itself is well animated, with my personal highlight being the enigmatic and quite psychotic Rory. A demonic gothic lolita wins every time in my book. The series has clearly had a bit of money thrown at it as the quality holds up right the way through the first four episodes, but as mentioned earlier, time will tell as to which way the story go. Will GATE be a story about nationalistic conquest, or will the presence of the three lovely lasses open the gate for a harem story. Only time will tell.

7
Will this show open the gate into SDF recruitment centres?