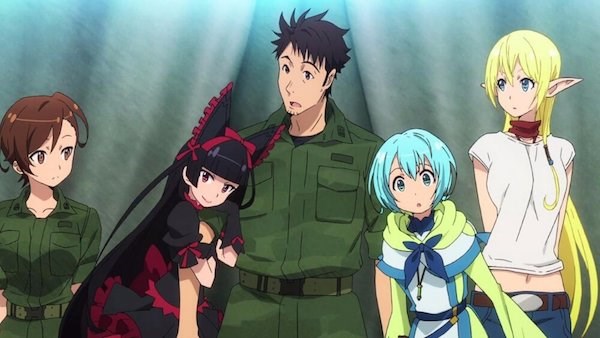 Now that I recall it, this is perhaps the third time I have been able to enjoy all 24 episodes of GATE, but this is the first of those occasions where I have actually been able to marathon the entire series in one or two sittings rather than in an “episode per week” fashion.

The first thing I have noticed by doing so is that the story, especially in the second half, is much easier to digest and follow. Secondly, I found the characters easier to relate to, especially with their changing situations as the various arcs play out. Lastly, I finally noticed how perfect some of the voice acting was.

My previous viewings were via a streaming service, with a significant separation between the first and second series. And while I reminded myself of the goings on with the first series before viewing the second, a lot of the detail seemed to have vanished over time. However having reviewed both of the streaming series here, here, and here, many of my original points still stand, with some further clarifications which I will consider below.

GATE is an anime adaptation of the light novel and manga series which is also known by its rather long full title Gate: Thus the Japanese Self-Defense Force Fought There. The story follows the events which occur after a mysterious portal, the titular gate, appears in the centre of Ginza, Tokyo. From this gate an army of thousands of soldiers armed with wyverns, swords, armour, and other pre-gunpowder weaponry, emerge and begin slaughtering and taking captives on what would otherwise be a normal shopping day on the world’s premier shopping street.

Yoji Itami was due to have a wonderful day at his favourite comic convention, when this rampaging army appears from the gate. Unfortunately for Yoji, he is also a member (and a commando, surprisingly enough) of the Self-Defence Force, so when he sees people in need, he takes the initiative and leads the crowd into the walls of the Edo Fortress, to wait it out until reinforcements arrive. When the modern armour arrives and takes on the invading forces it is carnage. 50 calibre bullets aren’t worried by mere chainmail. So once the invaders are dispatched, the Japanese SDF takes it upon themselves to send scouting parties beyond the gate, and establish a beach-head on the other side. Soon enough, more armies gather on the other side of the gate to challenge the newly arriving Japanese forces, and as swiftly as they arrive, they are slaughtered against the mechanised might of the SDF.

Though GATE is much more than just slaughter, on the other side of the gate is a whole unexplored world full of elves, mages, catgirls, and gods. And it now becomes Yoji’s duty, once the other side has been somewhat pacified, to scout out, explore, and befriend the locals. Much in the same way that Yoji made an impact in Ginza, he makes  impact on the other side of the gate, by befriending a dragon. Yoji and the dragon become best friends, and this allows him to create one of the greatest other-worldly quartets ever, starring: Tuka Luna Maeceau, the blonde and cut high elf; Lelei la Lelena, a teenage mage; and the delectable axe-wielding gothic lolita goddess of death, Rory Mercury. This quartet travels the special region, performing at concerts, liberating towns, taking baths, and overthrowing governments.

Ok, perhaps only some of the above is true. GATE is actually much less mundane than that, and while Yoji likes to help the people on the other side of the gate by doing so he and the SDF change that world forever.

I have spoken at length about the story in past reviews, and also the propaganda which is laced throughout the series. While some of the story in the second half is still weaker than that in the first half, it’s less of an issue when binge watched, as oppose to being watched episodically. What is more noticeable, however, is the nationalistic overtones. I don’t know if it’s just because I seem to be more sensitive to this at the moment, but all the “SDF are awesome and wholly justified in their actions” themes in the story grated on me somewhat. The main saving grace of the series’ second half is the reduction in the pro-military messaging, as well as an increased focus on the quartet of awesome, especially Rory.

A few words on Rory: I first watched the series in Japanese and I thought her voice actor, Risa Taneda, was perfect. That was until I heard her mature actor in the English dub, Molly Searcy, and I might have fallen in love a little bit more. There is a certain scene at a ryokan which… sold her talents completely to me. (It also might help that the same actor is Centorea in the English dub of Monster Musume). In fact, the English dub in general is pretty good, and one of Sentai Filmworks’ best to date.

There have been some enhancements to the animation since the steaming broadcast, these include revised CG in some of the action scenes: such as the “ride of the valkyries” during the Italica assault episode. I would have liked to comment on the collector’s edition, unfortunately it hasn’t arrived at the time of writing.

So, to conclude my ramblings: GATE is better than it has ever been, and while there are still some irritating moments within its writing and setting, it’s still a lot of fun to watch again. And with the addition of a really good English dub and improved visuals, it has become a series which is very satisfying to binge watch.

7
The addition of a good dub has improved an already fun series.