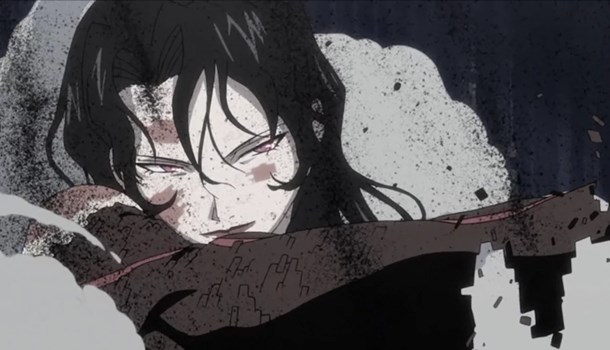 Now that we're safely ensconced back on the Fullmetal Alchemist bandwagon (and what a comfortable wagon it is too, I have to say) here at UK Anime, it's time to move on apace, as we tackle volume nine of the series on DVD.

At the end of volume eight (and episode thirty-two, in case you're counting), we were left with the usual end of volume cliff-hanger, as a group of undesirable ex-military Chimeras working with the Homunculus known as Greed as their ringleader laid siege to Dante's property with the express intent of taking Al hostage.  Picking himself up and dusting himself down from his brief and unsuccessful scrap with Greed, Ed sets off after the kidnappers, with the brothers' former teacher Izumi following not far behind.  Thus, the scene is set for some more impressive alchemy-based action, with confusion reigning as the brothers, Chimeras and military all collide.

From here on in, while continuing to move the storyline forward, the following episodes seems to have a heavy focus on the past of many of the characters, as we learn snatches of the history and motivations of both Greed and Lust, as well as touching upon the pasts of both Winry and Scar.  Lust's history in particular gets pretty much an entire episode, mixing present and past to give a glimpse of who Lust was in her former life while also giving us an insight into the Homunculus' broader plans, where we find (perhaps unsurprisingly) that Ed and Al aren't the only individuals which have been manipulated towards manufacturing the Philosopher’s Stone.  Talking of the stone, it seems that Scar has a rather grand plot up his sleeve, giving Ed and Al yet another headache to worry about on their own quest.

While some of the individual episodes on this particular volume of Fullmetal Alchemist perhaps aren't the best the series has to offer (with the aforementioned story with Lust at its centre a prime example, with that particular episode feeling a little laboured and trite throughout), it's still hard not to be addicted to the show simply due to its likeable main characters and gripping storyline.  It seems that for every weak moment, there are at least two fantastic ones, with the brother's journey, actions and relationships building up a story that works on so many levels.  Whether its action, humour, or something a little more thought-provoking, Fullmetal Alchemist seems to have something for everyone, and if (like myself) you like a mix of all of those things, then you might need to cover your television in polythene for fear of salivating all over it.  Yes, it really is that good.

So, while volume nine of the show doesn't really show off the series at its peak, it's still head and shoulders above most anime released in the past few years, and is certainly worth persevering with until the very end.

This volume offers a slightly more packed set of extras than most - English and Japanese soundtracks and English subtitles aside, we get textless opening and closing credits, production art, an image gallery and character profiles, and a set of Japanese commercials for the show.

8
Even an average volume of Fullmetal Alchemist still means a great showcase of anime.
LATEST REVIEWS