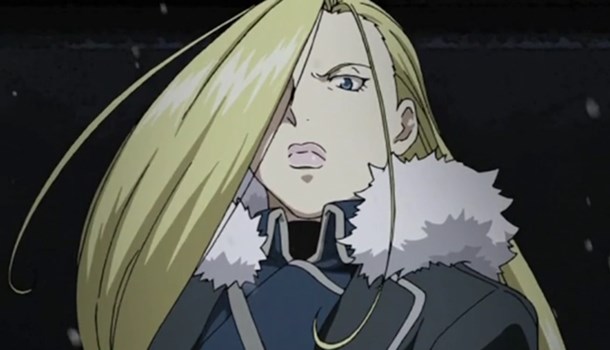 It's been a while since we caught up with the latest shenanigans of Alphonse and Edward Elric, thanks largely to the switch from MVM as the distributor of this series in the UK to Funimation. However, it would be remiss of us to lose track of what has been a truly great anime thus far, so we rejoin the show with volume eight on DVD.

At the end of volume seven, we left the Elric brothers on Yock island, where they'd been 'abandoned' by their old teacher, Izumi, in an attempt to remind them why they originally wanted to learn alchemy. At the very end of this volume, they came across a child on the island – Just who is he, and where did he come from?

While Full Metal Alchemist thus far has taken great delight in mixing the serious business of the brothers search for the Philosophers Stone with plenty of more light-hearted and amusing moments, the four episodes housed on this DVD see the series take on a much darker tone overall. Sure, the funny moments are there to provide light relief, but they're scattered far less frequently throughout each episode as the storyline sets its sights on beginning to answer some of the shows big questions.

As the series develops further throughout volume eight we find ourselves learning a great deal, not just about the origins of the mysterious child who's just shown up in the brother's (and Izumi's) life, but also of the true nature of the Homonculus who have plagued their journey so far. This note in particular is where the series has no qualms about entering dark and even disturbing territory, and you can't help but feel a little unnerved by some of the heart-rending depictions on show here – I would be more descriptive, but I really wouldn't want to give anything away for anybody who hasn’t watched these episodes just yet.

Away from the brothers (although far less prominent in these episodes), Scar also appears to be having some revelations of his own, as the survivors from Ishbal face further hardships still, and we also find ourselves introduced to further characters from both inside and out of the military to further add to the future complexities of Ed and Al's journey.

In all honesty, it's really hard not to sit here and simply gush superlatives about Full Metal Alchemist - It really is that great, and this volume of the series is as good as any. The comic relief won't make you laugh out loud but will bring a smile to your face, the more emotional moments may well leave a lump in your throat, and I've already referenced the darker segments that can really send a shudder down your spine, even at the second time of asking. In essence, this anime has done what so many others have tried and failed to do, and create a perfect blend to create what will undoubtedly be remembered for a long, long time to come as a classic example of quality Japanese animation and story-telling. Speaking of the animation, it's largely superb, and together with the great Japanese voice acting only adds to the vibrancy and impact of the show.

To sum up then, if you haven't taken the time to sit down and watch this series yet, then do it. Now. You honestly won't regret it - Although your wallet might have something to say about that, considering the number of volumes required to own the entire series!

English and Japanese audio, English subtitles, textless opening and ending credits and a set of production art make up this volumes body of extras.

9
A sublime mix of action and thought-provoking drama, with the odd laugh thrown in for free.
LATEST REVIEWS