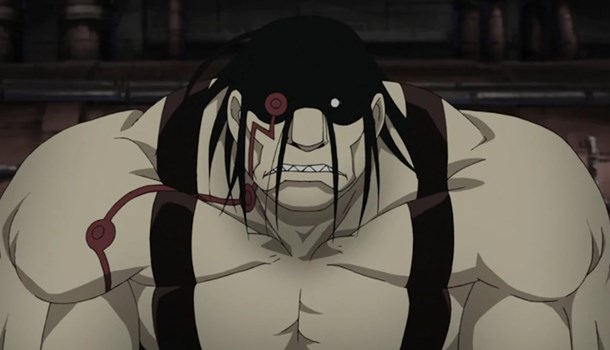 Volume 6 kicks off at a break-neck speed, with the first two episodes following on directly from where volume 5 left off.

As Alphonse continues to struggle with his sense of identity, Edward gets closer to the truth behind the Philosophers Stone and in doing so, realises the cost involved in pursuing their goal. We see an unlikely truce between Scar and the Elric brothers as they face off against the Homunculi; Lust, Envy and Gluttony in another superbly animated battle.

To make matters worse, a new mysterious character, Greed, is released into the mix and we’re given more clues surrounding Scar’s past.

The pace slows right down in the third episode as Alphonse’s identity crisis becomes too much for him and Ed is faced with the guilt over the sacrifice that his brother has been made to live with. The resulting episodes lead to some really nice exchanges between the brothers, as the strength of their bond is put to the test. The ever modest Winry drops in for the remainder of the volume as well to lend her emotional support, bringing with her the odd gag or two to lift the mood (as well as a screw she left out of Ed’s arm….whoops).

While Alphonse runs off in search of answers, he unintentionally ends up helping Scar and a group of refugee Ishbalans rescue one of their kidnapped children from a group of mercenaries. But all is not what it seems as they appear to be getting their orders from yet another unknown figure.

This is a solid volume with plenty of action, some great animated fights and plot twists that come thick and fast. The only downtime the volume suffers is used well to develop the brothers’ relationship right before the action kicks off again. This volume shifts the focus of the series slightly as the Homunculi get far more screen time. Scar and the Elric brothers seem to have found a common enemy and as a result, the series is left wide open for anything to happen.

One of my personal favourites, Hughes, is still blabbering on about his daughter and we get to see that even the highest ranking military officials wear dodgy pyjamas at night.

This series has a real ability to perfectly balance a mix of comedy, action with some thought-provoking moments. Volume 6 doesn’t disappoint for me.

You get the usual light features; Opening/Closing credits and some production art stills but nothing to write home about.
8
Thoroughly enjoyable from start to finish.
LATEST REVIEWS