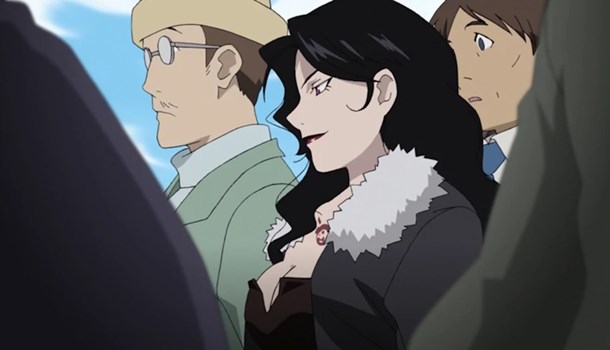 Alphonse and Edward are back in their third volume, and after the gut-wrenching episodes on the last disc, I really needed a break - luckily that's what we get, with 4 episodes which focus on action and intrigue rather than the cost of alchemy and the misfortunes of those who dabble with it.

There are two stand alone episodes on this disc, the first dealing with a small town in the grip of a ruthless army officer who has bled them dry, and the second which focuses on a small town on the edge of extinction and a sexy female thief who makes fantastic headlines with her daring, alchemy assisted robberies.

The last two episodes forms a two-parter, The Other Brothers Elric, which finds Ed and Al facing two imposters using their identities to further research into a substitute for the Philosopher's Stone.

Of these episodes, the chase for Siren in episode 10 is probably the most entertaining - it's the first time Ed seriously fights a female opponent, and although you know he'll come out on top, a nice plot twist at the end makes you smile. It also has a number of nicely timed gags to keep you grinning while Ed hunts down his prey.

As an overall package, the third volume is light, fun and thin on groundbreaking plot twists. Our mysterious female manipulator from episode one makes a reappearance, but otherwise you can view this disc as a stand alone compilation of adventures which have their fair share of exciting moments and nicely choreographed fight scenes.

Extras are few and unspectacular - clean opening and closing credits and some sketches making for a lightweight package.

Overall, a worthy but uninspiring addition to the series.
7
Solid and entertaining, but it's the lull before the storm.