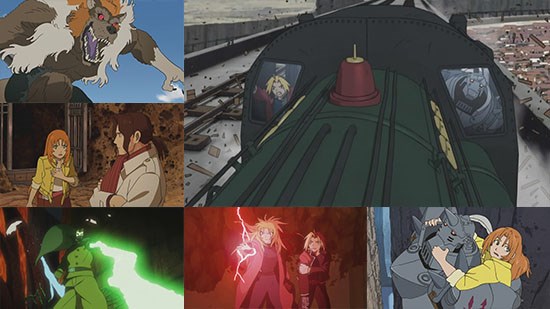 Both Fullmetal Alchemist series are held in high regards with fans. The second series, Brotherhood, especially sticks as being of a very high quality; it’s a shame that the film based on the first series, Conqueror of Shamballa, proved to be less than compelling, despite the hilarious inclusion of Hitler and putting the Elric brothers in 1920’s Germany. So will this second film, based upon the Brotherhood series, prove to more fulfilling?

This side-story set in the midst of the series proper sees a criminal break free from prison in Amestris, and the Elric brothers Edward and Alphonse join the effort to recapture him. The duo confronts the escapee, who proves himself a dangerous opponent able to create ice and lightning from the alchemy circles drawn on the palm on his hands. Despite the Elrics' efforts to capture the criminal, he ends up escaping, and after some investigation they discover that he was just weeks away from release. So the brothers decide to catch up to the wanted criminal and find out what made him escape.

The best way to describe this film would be that it is basically a extended episode of Fullmetal Alchemist: Brotherhood and nothing more. It is so detached from the main story of the series that there isn’t really much you can relate to between them. True, the Elric brothers are present and we see Mustang, Hawkeye and Winry, but that’s it. Everything else including the setting is brand new, making it quite hard to care about what is happening as the emotional connection the series built really isn’t there.

That is not to say there is anything overly wrong with the story to the film. It does what it needs to and is fairly entertaining, if somewhat predictable. If you are expecting award-winning stuff here however, then you are really looking in the wrong place. The action scenes themselves are actually quite intense, if over fairly quickly, but it does feel like that this is a very by the numbers film that's playing it safe to make sure it appears it appeals to everyone without ever really taking any risks.

I could sit here all day and pick holes in the film. The good points that can be taken away from it are that the animation keeps the quality of the series and actually has some nice set pieces, such as the train sequence near the start of the film, and that the film in its own right is entertaining - let's face it, it's always nice to see a bit more of the Elric brother in action. I just wish it incorporated more of the magic of the show, rather than being a by the numbers film adaptation. Still, at least it is better than sending the brothers back in time to stop Hitler...

English and Japanese 5.1 audio with English subtitles.  Extras consist of a "Making of" feature, US cast commentary, trailers, web promotions and TV spots.

7
An entertaining romp, but it loses some of the magic of the series.
LATEST REVIEWS