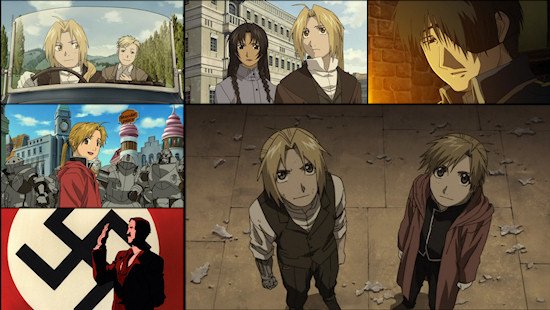 Fullmetal Alchemist: The Conqueror of Shamballa

Although all of the focus in recent years has been (quite rightly) lavished upon Fullmetal Alchemist: Brotherhood as it accomplished what can only be labelled as a nigh-on perfect job of telling the original manga's story in animated form, it shouldn't be forgotten that the original Fullmetal Alchemist anime series was also hugely popular in its own right, and with good reason.  Although the series itself is now much harder to come by, Manga Entertainment have managed to resurrect the movie which acts as a closing chapter to that series for a re-release as part of a Fullmetal Alchemist movie double pack.

For those already familiar with the show's world and its characters there are no surprises as The Conqueror of Shamballa begins, with Edward Elric and his armoured brother Alphonse thwarting a villain sporting a uranium bomb in spectacular (and destructive fashion).  But is this reality, or simply a tale told by a young man with a hyperactive imagination?  Out of nowhere, our focus shifts to the Weimar Republic in 1923, and the Ed we know and love recounting this tale to a disbelieving but nonetheless amused Alphonse - not Ed's brother however, but a flesh, blood and decidedly unrelated friend to Edric the elder.

In short, the events at the end of the original Fullmetal Alchemist TV series saw Al regain his body (but lose his memories of the struggle to regain that body in the process), while brother Ed was cast into a parallel world... our world as it happens, coinciding with the rise of the National Socialist Party in a Germany rife with increasing public discontent and unrest.

If you're wondering what the Nazis have to do with alchemy, this is explained in relatively short order, with high-ranking officials within the party looking to discover the "Great Serpent" and in turn open the gate to "Shamballa" as the first step in arming their troops to instigate a coup and take control of German politics and beyond.  Of course, what they assume to be Shamballa is in fact what we know to be Amestris, and the thought of the creation of gate between the two worlds is as thrilling for Ed as it is shocking as the possibility of a return home and a reunion with his brother is tempered by the prospect of that home being destroyed by invaders from this parallel world.

The resulting movie is, put bluntly, a real oddity - at times it feels as though it doesn't want to be a Fullmetal Alchemist movie at all, preferring instead to focus its gaze intently on the rise of the Nazi party in the build up to World War II, and how even good men and women can be led astray in times of hardship by the convenient selection of a scapegoat or two and the promise of a return to better days by ousting those unwanted elements in the name of fighting for the rights of the little people.  It's a lesson in history that is delivered in a heavy-handed manner at times by the film, but it's frequently fascinating in the way that it moulds these realities and real-life personalities (Fritz Lang features heavily, for example) in their historical setting and then somehow manages to bolt then whole thing to the franchise's world of alchemy and the fantastic via that oldest of tropes surrounding the Nazi party and their fascination with the occult.

Incredibly, the whole affair manages to hang together by the skin of its teeth - you can just about believe in a world where Edward Elrich would punch Rudolf Hess in the face, and to be totally honest seeing Nazis getting beaten down and their plans thwarted never gets tiring no matter how you go about it.  The movie also has enough action set pieces to grab your attention, all of which are excellently animated (aside from a few examples of ropey CG) and punctuate a movie that well-paced for the most part to ensure that its 110 minute running time flies by for the most part.

One area where this release of The Conqueror of Shamballa undoubtedly reigns supreme is with its selection of extras, and more specifically the inclusion of not one, not two but three commentary tracks.  As well as the more standard US voice cast commentary, the second DVD for the film also contains commentaries by both the Japanese voice acting cast and the movie's director.  Throw in another hour long discussion session with the Japanese director and voice actors, and you start wishing that more UK anime film releases were this comprehensive in the extra content offered.

Admittedly, in the midst of the world of Fullmetal Alchemist this film does serve as something of a curio - despite slotting firmly into the world of the original anime series it's still unlike anything you'll be able to find elsewhere in its canon.  If 20th century history isn't your forte or of interest to you then The Conqueror of Shamballa may frustrate and disappoint in equal measure, but from a personal view its a fascinating effort that completely defies many expectations of what a Fullmetal Alchemist movie might consist of.  It's a story that has something to say and broadly succeeds in saying it, which is more than can be said for the other film it shares this double-pack with, The Sacred Star of Milos, and some kudos is due for that alone.

English and Japanese 5.1 audio with English subtitles.  The two DVDs which this film occupies are absolutely loaded with extras - as well as a behind the scenes feature, trailers, production art and an image gallery, disc two features three commentaries starring both Japanese and English directors, staff and actors, as well as a one-hour discussion with members of the film's Japanese cast (including the voices of Edward, Alphonse and Mustang) and director.

7
It's a decidedly unusual addition to the Fullmetal Alchemist universe, but it's still a fascinating one with a very unique story to tell that still has enough charm to impress most fans of the franchise.
COMMENT AND DISCUSS
blog comments powered by Disqus