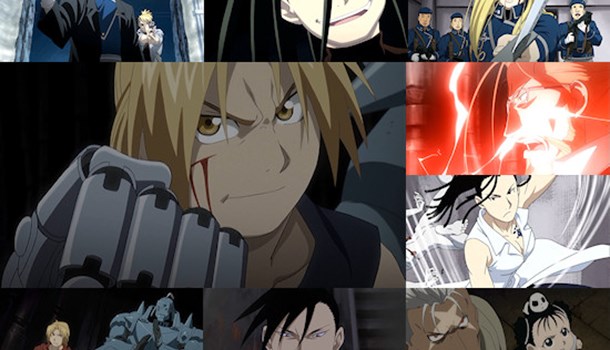 A journey which began a little over a year ago on DVD comes to its close as we reach the final, climactic volume of Fullmetal Alchemist: Brotherhood - a fact which fills me with both a little sadness and more than a passing flutter of excitement given the top-notch animated fare we've been served in the volumes leading up to this grand finale.

With Mustang and company's multi-faceted rebellion against King Bradley and a plot which threatens the entire country of Amestris now in full swing, the first matter of concern is how to paint this fully-fledged assault on Central as something more palatable to the general populace - cue a twisted story, relayed over the air via a captured radio station, suggesting that Mustang's troops are attempting to fend off a coup d'etat set into action while Bradley is away from the area.  With these problems somewhat tidied away, it's time to get down to the real business at hand - defeating the remaining Homunculus and stopping their so-called "Father" and whatever nefarious scheme he has in mind.

Given that so much is at stake here, it isn't any great surprise to find that the dozen episodes provided within this final volume of Fullmetal Alchemist: Brotherhood are packed to the rafters with action and drama, and there's barely time to take a breath as the set pieces come thick and fast while the cost of failure goes through the roof for those involved.  These scenes somehow never prove to be anything other than utterly spectacular, whether its Mustang finally realising the opportunity for vengeance against Hughes' killer or the struggle to gain the upper hand within Central - there are so many outstanding scenes I'd like to mention here but dare not for fear of spoiling things, but suffice it to say that the episodes on this volume nary put a foot wrong when it comes to delivering the goods.

Thankfully, there's more to the climax of Fullmetal Alchemist: Brotherhood than simply intense action - the story itself features some brilliantly grandiose revelations before matching those jaw-dropping moments with suitably bombastic responses.  All of this is delivered in a pull no punches style where anything can (and probably will) happen in a true life and death battle for the future of Amestris that nonetheless still finds time for its odd sappy or introspective moments without ever ruining the pace of its wider plot.

It's genuinely difficult to try and give you a feel for how nigh-on perfect the ending to Fullmetal Alchemist: Brotherhood is without risking spoiling the whole thing - thus, you'll simply have to make do with me pouring forth a bevy of superlatives in a desperate attempt to relate to you the brilliance of it all... there you go, "brilliant", that's a good start.  Stupendous, fantastic, gripping, outstanding - I could go on and on, but you get the point now, right?  If you're allergic to poor or otherwise unfinished endings to anime, then even on this count you have nothing to worry about here - every loose end is wrapped up, most of them in a hugely satisfactory matter, via the show's final episode.

Despite a slightly slow start in its first volume that struggled with having to retell elements of its story familiar to fans of its first anime outing, we've been singing Fullmetal Alchemist: Brotherhood's praises for some time now, and the climax to the series certainly goes a long way to cementing its place as a modern classic - a true example of shounen anime done right, with strong characters and a compelling and intelligent storyline coming together in perfect harmony to create something that sets your heart racing one moment and moves you the next.  If you've been unsure about the series and holding back on picking it up, you no longer have any excuse - we can now officially label this anime adaptation as superb.  It's well animated, well directed and tells its story in a way which is almost beyond compare; I would wager we'll be talking about this series in glowing terms for many, many years to come.

English 5.1 and Japanese 2.0 audio with English subtitle.  Extras are made up of textless opening and ending credits, a (legitimately funny) outtakes reel featuring the US voice acting cast, and commentary on the sixth-fourth and final episode courtesy of the show's US ADR director and the voice actors who play Edward and Alphonse Elric.

10
A virtually perfect ending to an outstanding series - a shining example of expressive story-telling in anime, and a line in the sand for what every shounen series should aspire to.
LATEST REVIEWS