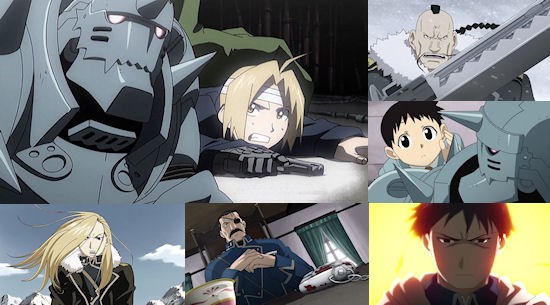 Following what proved to be an overly familiar start for long-standing fans of the Fullmetal Alchemist franchise in its opening volume, the second part of the show's Brotherhood reboot really lit a fire under the series in a blaze of new characters, action and fascinating twists and turns.  To say that we loved it would be an understatement as its thirteen episodes barely put a foot wrong while they thrilled us to the core.

After all the excitement of the previous volume, part three of the series kicks off with a recap episode of sorts; a mix of old animation and new centred around Van Hohenheim which takes us through some decidedly surreal scenes as it outlines what's happened in the series thus far while also dangling some other little tantalising thoughts in our direction.

From here it's time to get right back into the swing of things, with Alphonse and Edward coming face to face with the mysterious individual known only as "Father" at the heart of the conspiracy which has poisoned the military from top to bottom, threatening the entirety of Amestris and its people as a result.  This makes for an early dose of the kind of fascinating, fluid action sequences which have become a hallmark of the show, coupled with lots of important plot development thanks to revelations aplenty and the acquisition of a sought-after Philosopher's Stone for one character in a decidedly unplanned manner.

After that intense burst of shock and awe, most of the remaining episodes spread over these two DVDs take a more measured and careful approach to progressing the show's story.  At times, this comes via flashbacks to fill in the goings-on during the Ishvalan war through the eyes of those that fought for the military within it, or to delve into Van Hohenheim's past as his character is fleshed out, but these trips back in time are never unnecessary, unwelcome or overly elongated, and all serve to enhance the show's rich tapestry and the moral dilemmas which lay beneath it further.

Come the second disc of this volume, we're introduced to the north of the country and the fortress of Briggs, bringing another major player into the fold in form the fort's commander Olivier Armstrong before dumping her and her forces headlong into a series of crises surrounding the appearance of a Homunculus, the arrival of State Alchemist and former war criminal Kimblee, and a scenario which draws Briggs into the conspiracy unfolding within the military.  It's this aspect of the story that slowly moves Brotherhood up through its gears, delivering some jaw-dropping twists and turns that remind you of just what an awe-inspiring outing this series can be when it hits its high notes.  By the end of this third chunk of the series you might well find yourself feeling nigh-on physically exhausted, such is the intensity of the unfolding drama and tension.

Thankfully, this particular volume of Fullmetal Alchemist: Brotherhood is also free of the subtitling errors which plagued our review copy of part two, with only one relatively minor timing error on episode twenty-eight even worthy of mention while the video and audio quality is up to the same decent standard set by earlier volumes.  Throw in a couple of US voice actor episode commentaries and you have yourself as good a release as we could have hoped for since Manga Entertainment decided to pull the plug on Blu-Ray releases of this series for the UK.

Although this latest instalment of Brotherhood doesn't have quite the immediate, visceral charge of part two, that isn't to say that it's anything other than a raging success - it knows when to land a hefty plot twist at the feet of the user whilst never neglecting its requirement to build up particular characters and put them in place like the chess pieces that they are for maximum impact further down the line.  Watching the movement of these proverbial pieces is a fascinating experience in itself - sometimes dramatic, occasionally surprising but never dull.  More importantly, with every move and each episode it becomes clearer than ever that Fullmetal Alchemist: Brotherhood is shaping up to be a very memorable anime series indeed.

English 5.1 and Japanese 2.0 audio, English subtitles.  Extras consist of textless opening and ending credits, and commentary tracks for episodes 28 and 36 featuring the show's US ADR director and the voice actors for Havoc, Envy, Father, Scar, Olivier Armstrong and Buccaneer.

9
A more measured slice of story-telling than part two of the series, but no less appealing or addictive for its slight change in tone and focus.
LATEST REVIEWS