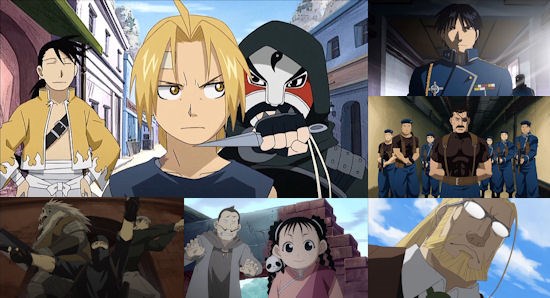 If the first bundle of Fullmetal Alchemist: Brotherhood's episodes gave you a "seen it all before" feeling as a fan of the original anime series then fear not, as this second part of the series and the events it covers proves to be a breath of fresh air after that earlier rush through the show's well-known material to get to what we like to refer to as "the good bit".  In short, if part one of Brotherhood frustrated you at all, then it's time to jump back on the Fullmetal Alchemist bandwagon for part two - trust us, you won't regret it.

The thirteen episodes which make up part two of the series certainly waste no time in getting straight into the thick of the action, dropping us back in to the Elric brother's current plight involving Homunculus Greed just in time for King Bradley to join the fray in a brutally powerful fashion.

With the trauma of these events awakening previously dormant (and decidedly important) memories within Al to move the brother's journey towards regaining their own bodies back forward a step, the rest of the episodes on show here find themselves with plenty of time to luxuriate in building up a huge conspiracy that slowly but surely begins to suck all of the major characters into its clutches.  This includes a number of new characters to the fray from the neighbouring land of Xing, as that nation's various clans race to find a way to bring immortality of their ailing king, from Prince Ling Yao and his bodyguards through to the diminutive May Chang.  These new additions also bring with them a subtly different form of the alchemy we're used to in this series, via an art known as Alkahestry; an ability which holds a more medical than military usage, although that doesn't stop these new arrivals from kicking various forms of ass throughout this volume.

Now that Fullmetal Alchemist: Brotherhood has really got its claws into the key tenets of its story, this volume of the series really allows it to stretch itself and show what it can do - something it achieves with aplomb, ramping up the political conspiracy and tension markedly on almost an episode by episode basis while mixing it expertly with the emergence of more supernatural Homunculus, the progress of the Elric brother's journey and the new arrivals from Xing.  There's so much going on across these two DVDs that a lesser series would make a complete mess of keeping everything in check, but somehow this show manages to keep all of these balls in the air in a stunning juggling act that provides breath-taking action, lump in throat emotion and tremendous story-telling as though it's the easiest thing in the world.

Technically, the DVD release of this second part of Fullmetal Alchemist: Brotherhood boasts acceptable video quality (with a slight upgrade in quality for anyone looking to pick up the Blu-Ray no doubt) and decent audio, with an English dub that is solid if never quite matching the delivery of the Japanese original.  Our only real gripe here comes from the second DVD, which finds its subtitles badly laid out on a number of occasions, allowing lines of text to run off the screen to make parts of those subtitles impossible to read and thus ruining the odd snippet of dialogue here and there.  It's a basic error which simply shouldn't be there, and while we're thankful such errors are relatively infrequent on the disc they still occur far too many times for our liking.

Truth be told, it's really quite hard to describe just how fantastic a viewing experience this volume of the series is, at least without ruining said experience by littering this review with spoilers.  All we can say is that it's the most fulfilling, satisfying and breath-taking piece of TV anime this reviewer has enjoyed in quite some time.  It's near perfection in terms of its pacing, characters, deployment of humour and action and the way all of these elements fuse into a compelling narrative - the scary thing is, it has the potential to get even better of the series continues.

English 5.1 and Japanese 2.0 audio with English subtitles.  Extras are made up of textless opening and ending credits, plus audio commentaries on episodes 14 and 23 featuring the show's American ADR director and various members of the voice acting cast, including the US voice actors for Havoc, Greed, Ed, Ling Yao, May Chang and Lan Fan.

9
This is TV anime at its absolute best - inventive, smart, expert in its blending of action, drama and humour and above all, utterly compelling.
LATEST REVIEWS