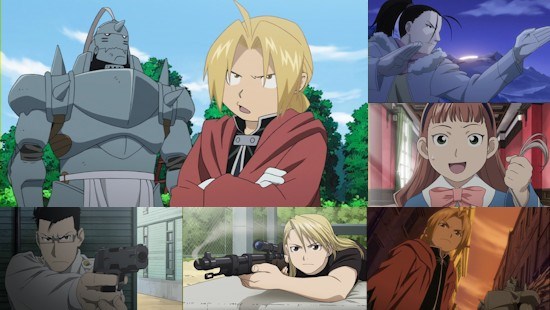 Given its constant presence as a fan favourite, I'm sure we aren't the only ones who will never say no to another chance to revisit the world of Fullmetal Alchemist - a feeling that was only exacerbated by the brilliance of Brotherhood, and only slightly assuaged by the less stellar Sacred Star of Milos movie.  Whether you're a completest or simply hungry for more from Fullmetal Alchemist, this OVA collection serves up too very different experiences for you to enjoy, compiling the bonus materials included on the original Japanese releases into a single collection available as a DVD and Blu-Ray combo pack.

First and foremost, let's talk about those OVAs - four relatively short fifteen minute bonus episodes, each of which focus on a small, self-contained story of its own.  While the first is arguably the most contained of the bunch, focusing as it does on the Elric Brothers as they investigate rumours of an alchemist who has supposedly successfully carried out a human transmutation, the others largely serve to fill out different aspects of Fullmetal Alchemist: Brotherhood's back story.  Thus, the second OVA is a light-hearted tale of the importance of Winry's earrings, the third takes a look at the early training of Izumi Curtis as she tries to survive for a month in the harsh conditions around Fort Briggs, and the final instalment visits Roy Mustang's training and his rivalry-turned-relationship with Maes Hughes as the bonds between the pair tighten all the way through to the Ishvalan war.

The result of bundling these four OVAs together is rather uneven - outside of their release alongside relevant episodes of the series it's hard to pinpoint precisely where the first two instalments in particular fit into the show's timeline, while the varying tone of the episodes also isn't best suited to viewing them all in one hit.  Out of the four however, the first episode is by far the best, smartly leveraging some of the most salient topics of the series proper and distilling them into what is ultimately a rather dark and unsettling tale.  Beyond that, a weak second OVA episode is offset by more interesting third and fourth instalments which offer a fun and marginally insightful look into the origins of some of its best-loved characters.  If you're a fan of the series as a whole, you'll find something to enjoy from each story (be it outright comedy or something more serious) even if missing out on these tales won't impact your thoughts or love of the series proper.

Also included in this collection are sixteen "Four-panel Comic Theatre" short films, each of which is typically only a couple of minutes long.  While the full OVA episodes all fit firmly into the Fullmetal Alchemist: Brotherhood canon, these efforts are firmly aimed at comedy.  Badly animated, completely dumb and incredibly funny sums up most of these instalments, as they present moments from the series and then completely subvert them in the name of getting laughs.  Given original manga author Hiromu Arakawa's eye for comedy, it probably shouldn't be surprising to find so much comic value here, but to take some serious moments from the series proper and inject such daft surrealism and stupid gags into them successfully is impressive stuff and adds some definite value to this collection if you're looking for a laugh at the expense of your favourite characters.

While we couldn't enjoy the Blu-Ray version of this release fully due to a major issue with subtitle timings (that we're promised will thankfully been fixed for the final release you'll see in retail after we made Manga Entertainment aware of the problem), both DVD and Blu-Ray editions of the collection look the part while also sporting the same English dub cast as the series proper, ensuring that a decent job is done with the materials to hand even if the English cast doesn't work quite so well during the comic theatre instalments included.

As a whole, this OVA collection is a no-brainer for any major fan of Fullmetal Alchemist - it gives you some more time with a handful of its more interesting characters, fills some gaps in its world and offers some smidgens of new material to weave into its fabric.  If, conversely, you feel like you're "done" with this particular series then those OVA episodes might be a leap too far for you - however, you might well appreciate the canon-smashing humour on show in its comic theatre outings, which are delightful in their own crazy way.

Overall then, this is a satisfying collection of additional material that won't set the world alight, but will in turns entertain and amuse Fullmetal Alchemist fans while rounding out the Brotherhood universe nicely.

7
An uneven selection of bonus material that nonetheless fleshes out its world before poking relentless fun at it in a satisfying fashion.
LATEST REVIEWS