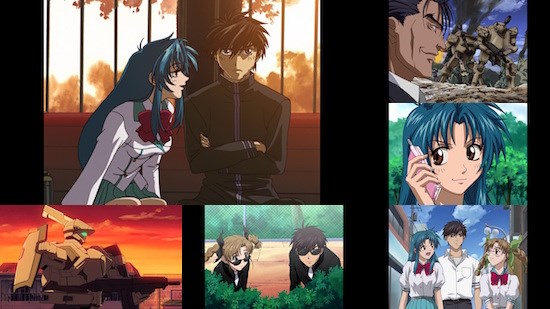 First things first, I have little a confession to make: I am a bit of a Full Metal Panic fan. Full Metal Panic! and Full Metal Panic? Fumoffu were some of the first anime series I watched after joining the forums on this very site based on the recommendations of several long standing members, including our current editor-in-chief. I enjoyed both at the time, though found the non-stop comedy of Fumoffu to ultimately be the more entertaining of the two. I was bitterly disappointed to discover that Full Metal Panic! The Second Raid was not, and would not be released on these shores at the time of its Japanese release. However, over a decade since they were originally made available, Anime Limited are bringing Full Metal Panic back to the UK along with the first ever release of Full Metal Panic! The Second Raid in the UK, all bundled into the same “Ultimate Edition” package, and in high definition to boot.

These series centre around the exploits of one Souske Sagara and his efforts to protect a Japanese high school student by the name of Kaname Chidori, who is under constant threat from a variety of terrorists and foreign government actors. Souske is an arm slave pilot and militaria nut who has a few issues fitting into polite society. He's also a member of Mithril, a super-secret paramilitary organisation blessed with with advanced weaponry who task themselves with maintaining peace and tackling terrorist groups. Kaname on the other hand is a perfectly normal high school student, with one small exception: she is one of the fabled “whispered”, a small number of people gifted with mysterious, almost supernatural, knowledge of advanced “black technology”. There is also an ample support cast made up of high school students and military personnel alike, ranging from Mithril’s stoic Richard Mardukas, their resident “ladies man” Kurz Weber and hard-drinking Melissa Mao through to Jindai High’s Shinji Kazama, who’s sharing of Souske’s military enthusiasm makes him an ideal friend, and Kaname’s bespectacled best friend Kyoko Tokiwa.

As you might expect, these series boast an abundance of spectacular mecha-related action sequences. However, there is also plenty of comedy to be found in Souske’s persistent failures to adapt to high school life, and his over-zealous protection of Kaname. There is also a good deal of drama and suspense, which ramps up markedly towards the conclusion of Full Metal Panic and The Second Raid as the stakes are raised, though it is in the interactions between Kaname and Souske where the heart of these three series is to be found. This is increasingly true as the series progress - even in the pure comedy of Fumoffu it is those interactions which stand above the rest as some of the highlights of the series.

In contrast to the all-out comedy of Fumoffu, Full Metal Panic proper (that is to say everything but Fumoffu) blends drama, action and comedy perfectly, making for a well balanced and enjoyable series. However, due largely to its age some aspects of the series may feel a little trite or cliché to younger viewers. Things which were fresh when the series first aired have become common as the years have gone by. That said, few series since can match Full Metal Panic’s execution when it is at it’s best.

It is at this point I think I need to give fair warning to those same younger readers: as stated already the first two series are a bit long in the tooth now, and they hark back from the days before the now ubiquitous widescreen format became standard in Japan. Therefore both Full Metal Panic's first series and Fumoffu are presented without alteration in their original 4:3 aspect ratio. That means you will see some lovely black bars down the side of your widescreen TV, which is of course infinitely preferable to the alternative of stretching and cropping the series to fit the 16:9 aspect ratio of modern TVs. While we are on the subject of the video presentation, on the whole these series look good in HD (albeit upscaled for the most part). However, there are occasional scenes where for whatever reason (one presumes the lack of a high enough quality source), the video quality dips. Thankfully this doesn’t happen very often, but when it does the video quality drops noticeably.

That, of course, is all par for the course when dealing with a series of this age. Conversely the age of the series and the amount of material now available has allowed Anime Limited to put together a very nice art book indeed, which is exclusive to this “Ultimate Edition”. My only real gripe is the SRP of the set, which is an eye watering £149.99. That seems slightly more palatable when spit down to near enough £50 per series, but it is still indicative of the recent upwards trend of anime pricing which has this reviewer at least buying a lot less then he used to. Even that can’t detract too much from the quality of what’s on offer here though - it is considered a classic for a reason and all three series are well worth your time whether you’re a long time fan or a total newcomer to the world of Full Metal Panic!

Physical extras in this Ultimate Edition consist of a 76-page hardcover art book.

8
It's not cheap, but it is quite simply the best way to see these classic series, and see them you should.
LATEST REVIEWS